Well, two weeks ago it was the plumbing madness. Last week it was an E.R. visit thanks to bad timing, a sharp knife, and a misplaced thumb. Now, it’s Miss Aqua, the 3rd parakeet I’d bought.

I’d expected the shoe to drop yesterday, if it was going to at all (Thursdays being what they’ve been, plus, don’t things tend to happen in 3’s, or is that just in the movies?). Well, today was largely a dust and wash the hell out of everything day, so I was going back and forth by the bird cages to get to the laundry. Everything seemed fine until about half an hour ago when I noticed Aqua on the bottom of the cage, wings spread weirdly (as in not even), panting like crazy.

At first I thought that there might’ve been a fight, but they would’ve been much louder before I noticed her like that in the first place. Then I thought maybe she was trying to lay an egg, but I thought that was rather weird since she’s gone back and forth on claiming 2 of the 3 nesting boxes in that cage–she would’ve gone into one of those if that was the case.

So, after several minutes, I noticed she’d moved over some, wings flapping and the like. Her head was like a 180 and when she flapped again, she started rolling around on the bottom. Definitely a bad sign.

So, I started looking up info to see what I could do. I considered that maybe there was a draft that was making her sick, so I secured some sheets to the cage sides again and checked the area, thinking maybe she was just looking for a warm spot. But the other birds didn’t seem to have a problem and it was a very middle-ground temperature. I have windows open in other areas of the house for fresh air, but not where they’re at because of my draft concerns. And the dryer was about 8 feet away, keeping the area pretty warm, too.

I knew it was serious and she was probably beyond help when I reached in to try and calm her down and she didn’t object to my petting her. Usually she tries to get away from my hand because she’s skittish, but she didn’t fight it and even grasped my finger in one of her claws at one point. My throat closed up a bit and I immediately wondered how long she could hang on to life at this point.

I went back on the internet for a bit and took a couple minutes to find more signs to look for, then I came back to the cage and she was dead. I reached in to check and stroked her back, but the eyes were closed and she was completely still and gone. It happened so damned quick. Couldn’t have been more than 20 or 25 minutes since I first noticed her distress til she died.

I sat on the floor next to the cage bottom, stroking her as she lay on the cloth I was gonna use to put over her to contain her (if she started fighting, to ensure no digestive blockage or egg was stuck, if that happened to be the case–and that she didn’t rear around and bite me out of fright). My leg was going numb and I had my phone on me for once. I’d intended to take video and ask advice before she died and saw something that made me use the camera anyway.

It was easily the saddest thing I think I’d seen in ages. Aqua was on the cage floor, already gone, but on the perch above was her mate, Dusty, looking down at her, occasionally letting out a single chirp, like he was trying to see if she was okay. 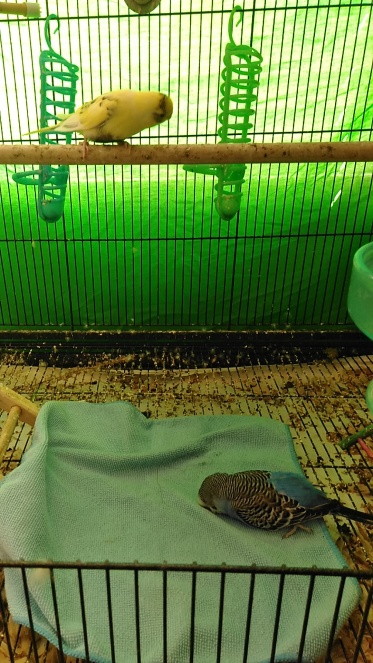 Dusty is one I can almost feed by hand, so he probably wasn’t startled by my hand petting the body or getting a bit close to him. And he didn’t flinch when I opened the cage door to get a better look. I took a few quick pictures because I’d never had to deal with this before and hadn’t seen this kind of bird behavior, and didn’t know if it was typical. But wow–I admit I got a bit choked up and figured I’d leave Aqua in there a few minutes to let Dusty mourn his girl.

I’d closed the cage door and had to get up a bit and get my asleep leg awake in that time. When I came back and squatted down, I saw Dusty trying to groom Aqua.

That’s when the tears started for real.

I felt so badly for Dusty, who looked so concerned for Aqua through his behavior. And when I opened the cage door again, he took off for the perch above again, as if he knew it was time and he had to get out of the way. I put Aqua in the middle of the towel, folded it over her, and took her outside to bury her in the yard… not too far from her crabby uncle Buddy, as a matter of fact.

I really have to wonder what happened now, because I saw no strange discharges or changes in behavior beforehand. Maybe she’s older than I realized and her time’s almost up. She was already full grown when I got her (the biggest ‘keet in the cage, now that I think about it), not barely past juvenile like other parakeets I’ve gotten recently. Maybe she was just up in age, or was having trouble with egg laying. It very well could be that, but I neglected to take a look and see or feel her stomach or chest before I buried her. Not that I’d know what the hell to look for, but I’m going to check out the nesting boxes and ensure that nothing looks amiss in there.

She and Dusty were definitely makin’ with the lovin’ for a few weeks now, so it’s hard to say. I don’t think I ever found evidence of her trying to lay an egg, even a dud, which is all it would’ve been before now. I’m a little bummed, because she was beautiful and was the first female I noticed who had the dark ceres going on. She’d been ready long before Sky or Nana, but those two ended up with the only babies we’ve had around here so far (with Pickle as the lucky father of all of them). Aqua’s the main reason I got the other parakeets, trying to find a male that could be with her. She seemed so lonely when the love triangle between her cage-mates became more apparent.

At least she got a good boyfriend before the end, but now I worry for Dusty and if he’ll get lonely soon. I’ll have to do some reading up and asking advice before I even think of another lady in the cage (especially with female competitiveness being what it is). I believe everyone’s paired up now except for him, even if they’re not all breeding.

So, Miss Aqua’s become a bird of some kind of paradise, rather unexpectedly. Helluva way to cap such a shitty month.

Oh November, November, don’t you dare let me down.