I’m starting to develop a major appreciation for plumbers and the know-how they have, and the skills and time it takes for their labor, because my hands are sore as hell after all the pulling and tugging and the like I had to do the past several hours.

Also explains why they seem to all have those Mario hands, even if they’re not 8-bit. Damn! 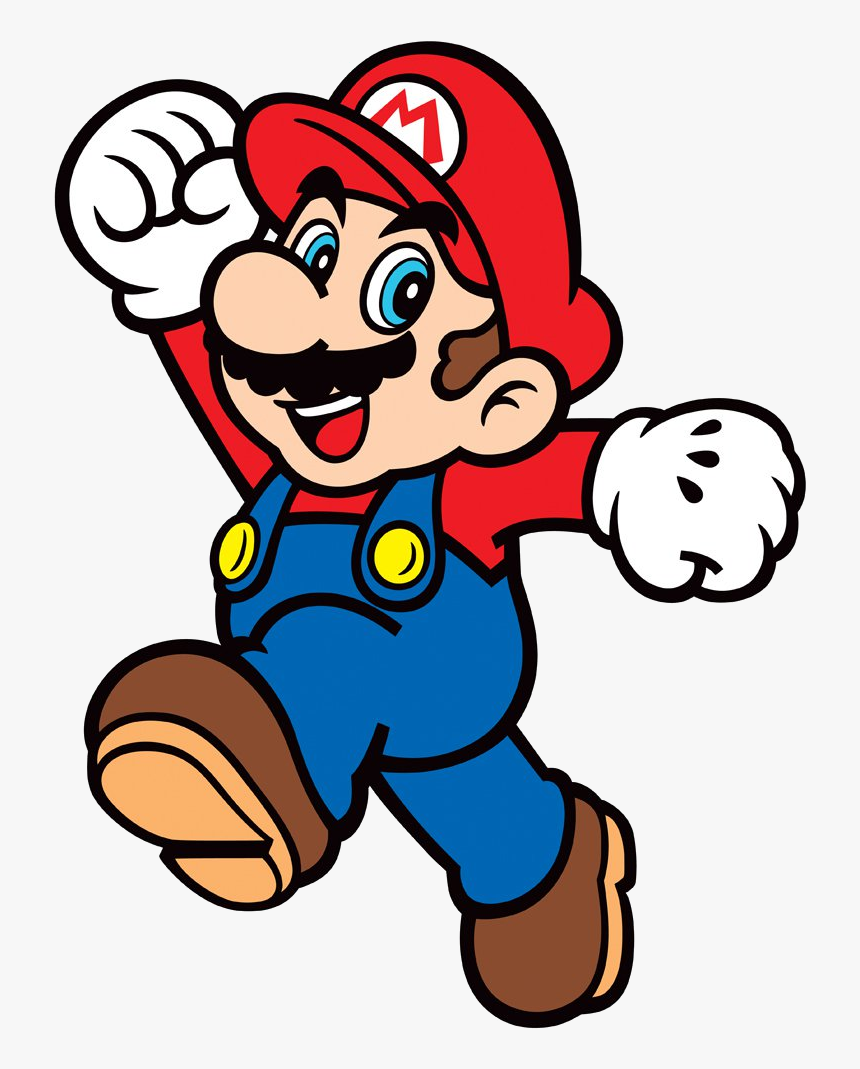 Seriously, look at those things! No wonder he can knock out a floating brick in one hit!

But some plumbers I’ve got a smidge of a grudge against right now because of an oopsie on the 2nd faucet and pipe assembly I tried to work on. I’m sure the 3rd and last one’s gonna have it’s own picadilloes I’ll discover in the morning (sigh).

Well, things started off pretty good, though I was worried when I noticed corrosion had gone to work on a handle screw, but then I realized I didn’t need to worry about it and could pull the faucet out once I’d removed the securing nuts underneath the sink. That made things a LOT easier. And out went that.

The pop-out drain was a LOT trickier, though. I could get the drop-down tailpiece unscrewed just right, but I was having the hardest time unscrewing that securing collar over the threading on the p-trap. I’d get it to budge a bit, but then it wouldn’t. So I’d essentially try to move it back to where it was before and try again, thinking maybe the threading was a little askew and it just needed a nudge back into the right groove.

Well, after two hours of frantic tugging and using every strap wrench and adjustable wrench, my hands cramping and getting absolutely sore, I had to call in my neighbor and ask for his help to budge it.

The guy’s got the forearms to pull it off, and I hoped like hell it wasn’t gonna just be something that needed 1 extra pound of pressure to get it loose, because I’m sure I wasn’t gonna live down the ribbing about “needing a man around the house” I’m sure would come out.

Well, HE had a damned tough time, and he had better tools than I did. Considering I wasn’t sure about PVC and how much it could stand, I don’t have a true plumber’s wrench (I’m sure I did and then dad got it and I haven’t seen it since… because I can’t find my old toolbox he wanted, either. Probably got swiped when kids broke into a property he was working on years ago).

Turns out, he had to get the saw and cut the pipe. Whoever built the sink piping glued the damned p-trap and there was no removing it otherwise.

I’m not a plumber, but damn. I learned when I was first asking questions about plumbing (as a volunteer at a historical site with quite ancient plumbing) that you don’t glue a p-trap, whether PVC or ANYTHING else. I’m guessing it was a mistake caused by time pressures and somebody got glue happy… and then they just rolled with it thinking no problems would ever come and expose it. Grr… Well, at least I had a nice piece to take with me to Lowes and do some comparison shopping and get the parts I needed, thanks to the handy saw. And Lowes doesn’t close til 10pm right now, so I jumped in the car with the part and high-tailed it over.

Now, I’m not used to working with PVC, so finding all the stuff was gonna be a bit intimidating. It was like trying to put together a custom LEGO set with only white pieces and heaven forbid you get the wrong ones. But thankfully I got some help. And when I explained what sink I was working with and had pictures of what went on, well, I got some short-cuts that I was initially hesitant about, but saved my bacon big time.

(I did get a 2 foot section of PVC and a cutter just in case, though)

The mess I had looked like there were scrapped parts and cast-off elbows making it overly-elaborate. What he found for me instead was the glue I’d need to attach a male adapter that went from 1&1/2 to 1&1/4″ and a bag with the 1&1/4 p-trap and pipe that would connect to the adapter. Apparently, manufactured homes for bathroom sinks don’t need a 1&1/2″ pipe, but I suppose for the sake of easy parts grabbing and the like, they used 1&1/2″ for every bit of indoor plumbing they could.

So, I got the primer and glue and put the adapter on the cut pipe. I figured out how to get the other parts together while I let that dry and do it’s thing (I heard it goes damned fast, but I’m paranoid about “drying times”). I also got all my tools together, checked the first faucet I had (the cabinet dried out quite nicely and no water had seeped elsewhere that I could find… and no pipe leaks, so good seals on it). Then, after a couple hours, I put the parts together, screwed the fittings tight, and put a cup of water down the drain. 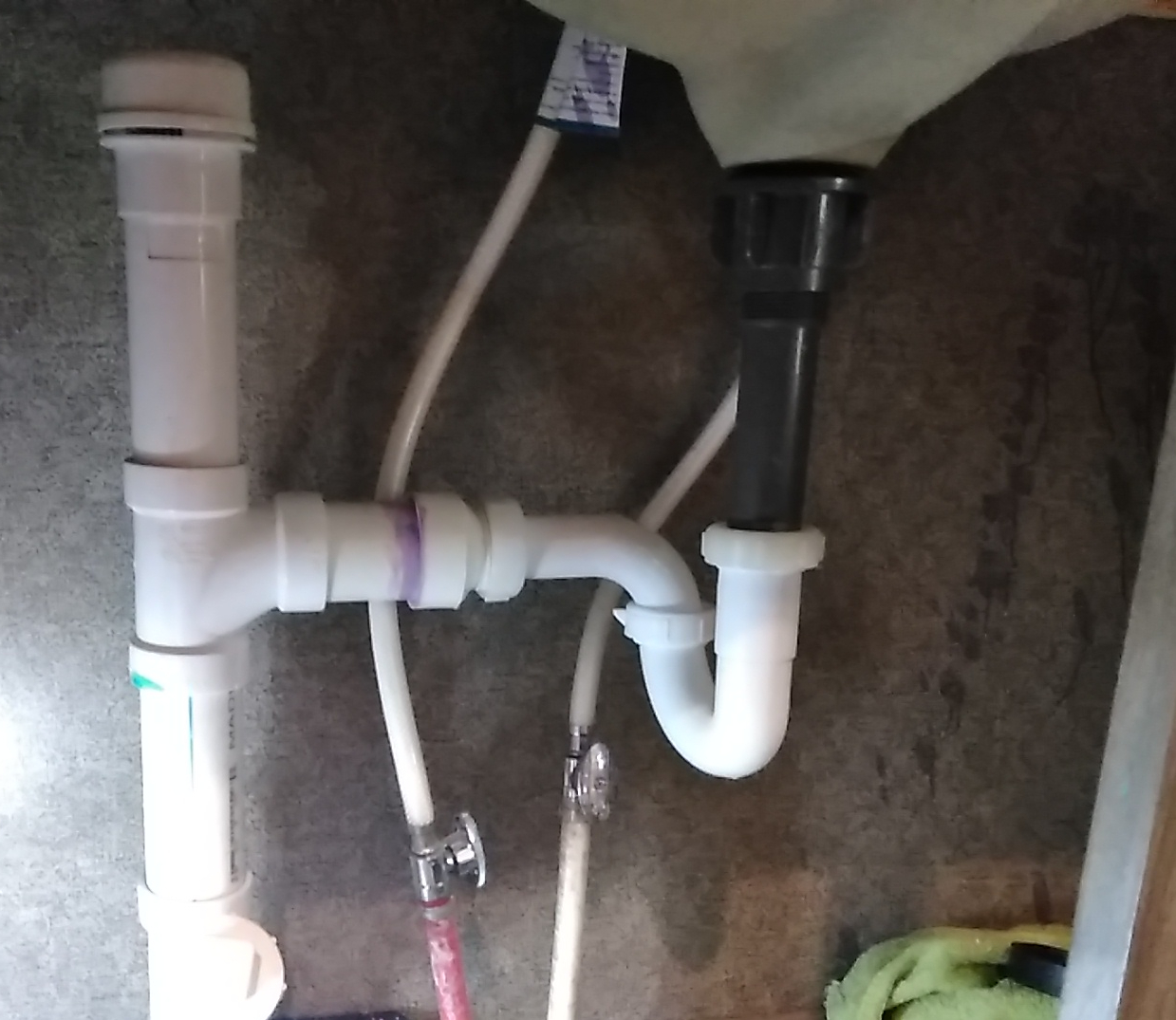 No leaks or anything.

And when I fully hooked up the water, checked the system and the drain (by the way, I LOVE those pop up drains far better than the lever-bar ones) and let a bunch of water go through… no problems at all.

Naturally, I’ll check again a bit later for any drops, but so far, it’s great.

At least my 3rd faucet to work on doesn’t have any crazy not-supposed-to-be-glued-on-parts that I can see or feel, but I’m sure there’s SOMETHING there waiting for me.