This question’s bugged me off and on for a while. Granted, nobody likes a Negative Nancy or a total a-hole all the time, and there are certainly times where certain things likely shouldn’t be said, but I do question the whole “don’t speak ill of the dead” thing. Though, thanks to social media and a general lack of filter in our minds and mouths these days, I suppose the phrase is kind of a weak rebuke by now.

As a matter of fact, what does it really mean? Don’t EVER speak ill, or at certain times only?

There’s one aspect to it that I get, in that the person who is dead can no longer be around to defend themselves and their actions (or rectify them), so it’s moot to bring things up. However, there are an awful lot of family members out there who say that type of thing (the numbers on Reddit alone make me shudder) like they’re in a long-game of pretend. They don’t want to face any problematic truths that might interfere with their happy family fantasy, and therefore will not hear about any bad things someone who died might have done. Or, because they’ve been around the bad behavior so long, they’ve rationalized it and are perpetrating it in their own lives, toward themselves or their kids, spouses, siblings, etc. So having someone point out the faults in someone they’re emulating–on purpose or otherwise–could force some uncomfortable reflection time on them.

Now, just for the sake of basic manners, hashing everything out at the funeral just smacks of a-hole to me. People are there to grieve, and whether it’s for the family left behind, the person not being with them anymore, or the fact that the person was so lousy they should’ve been taken sooner… well, that’s something else. I personally don’t think all the negatives should just explode out. Not there.

Then again, how many people have stories where they overheard folks discussing who might get what in the will AT the bloody funeral? That’s right up there in the “WTF?” department to me.

On the other hand, I also disagree with platitudes at funerals. For example, if the person who died was a deadbeat alcoholic parent who sponged off their own parents for money and let their own kids go hungry for booze money, then having a preacher or family head drone on and on about what a thoughtful and loving spouse and parent they were feels like an insult and a joke.

Makes about as much sense as using little paints and brushes to disguise a fresh pile of dog shit. Might look a bit nicer, but still stinks to hell. People are gonna know better. Hell, little kids will know better. 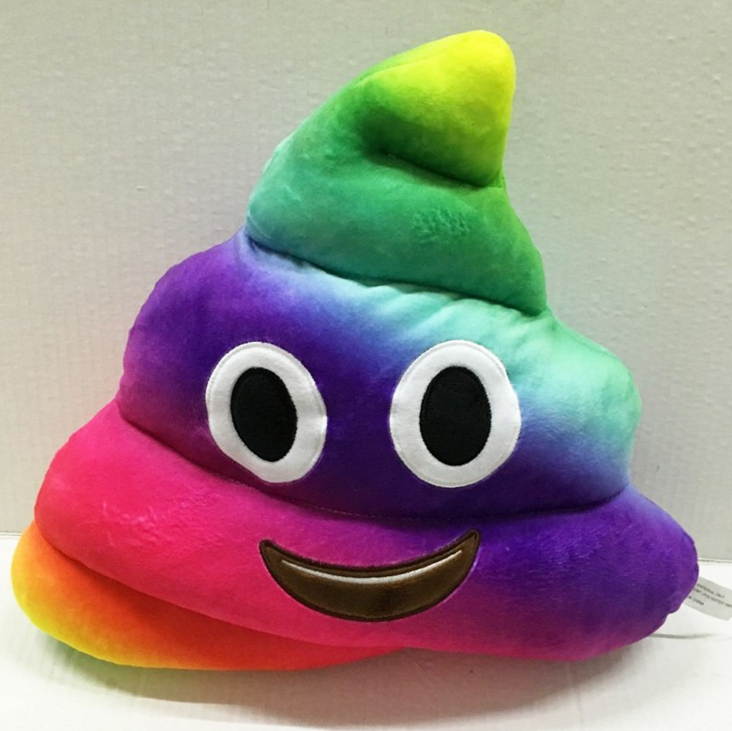 Not the best example, from alibaba.com, but you get the point. I hate those emoji things (ugh).

They can keep the good parts (whatever they are) intact, make it short and sweet, and that’s it. Some truth thrown in about attempts at bettering themselves would be good, too. But glossing over every negative when the majority of the person’s actions toward those at the funeral–in life– were negative is probably what would make many people explode at the wrong time.

Again, that’s just what I think about it.

I suppose it depends on the circumstances and how “ill” the person’s actions in life were on a case-by-case basis. I just wonder if there’s a general idea on how long you have to wait before someone’s faults and foibles are allowed to be brought up in conversation or some family issue that’s cropped up. I think the notion of “don’t speak ill of the dead” is unrealistic, but it could be these cynical times telling me this is true, also.

It’s true that when one was loved (and flawed), there’s some mourning to be done and to make yourself feel better, you might wanna just talk about and think about the good times. That feels natural. What I wonder about is people who hold others up as saints that can do no wrong, and because they don’t allow themselves to drift into the negative things AT ALL with their deceased figure, they idolize them and compare them to everyone else living. I’ve lost count the number of stories about people who idolized deceased significant others and have spent decades worshipping the dead at the expense of new relationships. Reddit (I know, I know) had several, and it got me thinking on this question.

While it’s nice to be positive, brainwashing yourself to be all “happy happy” about the deceased person and comparing all others to them is not fair to the living. It’s the inverse of what I brought up before: they’re dead, so they can’t do anything else to screw up the image you have of them.

And on and on it goes.

Naturally, when it’s a public figure that was reviled or polarizing, the “speaking ill of the dead” part can start really fast.

I just wonder if that whole notion of “don’t speak ill of the dead” is even taken seriously anymore, and in what ways. If I’ve heard it said (not often lately), it felt like a reflex, like when you sneeze and someone says “bless you” (okay, maybe not quite as automatic and unthinkingly as that, but close).

There’s just something I’ve wondered about all this.