I have to say I haven’t gotten the hang of consistency for much longer than a week or two. Perhaps that’s why I was such a wage slave for so many years and am just now trying to get away from that and bear some more responsibility for what I can and will do in my life. Many posts on here have related to me thinking up something, trying really hard for a bit, and then burning out.

And I hate it.

And I REALLY hate that it’s taking me so long to get back to my writing again, where this unfortunate trend will likely play out and I’m back at square one.

I did have a period of a few months where I was doing rather well for most of the time. Maybe a few missed days scattered around, but that was about it. And I remembered that thing I had and what worked out for me so well.

A simple wooden garden bench that I put near a tree as my reading bench for the Little Free Library.

The same bench that got knocked to hell by the dog’s chain a few months ago and I had to remove it.

The bench that started falling apart as I noticed more cracks and the arm fell off.

It’s only good for stacking my mulch bags on for now so I can keep them off the ground and away from the ants. The next stop will be the burnpile, once I get things situated and can shift piles and tools accordingly. But if anyone were to sit on it on one side, one of the legs would snap and the whole thing would fall over and hurt them.

That’s why I removed it.

But I hate doing it, not just because I had to fork over some money for something that didn’t last nearly as long as I thought it would, but because it was a great place to sit and do some work early in the morning. Even if it meant I had to bring out my lap desk and be super careful with my coffee cup on the ground or next to me on the wood. And it was nice because my dogs would come up and ask for a petting while I was there, and I’d give ’em a quick hug and a rub and they’d go do their doggie things for a little bit.

As much as I love my porch, that was the spot I preferred if I needed to write. And the best place I could journal write.

When the bench broke and I had to move it, my writing went downhill in every way.

And I’m guessing a big part of that was because my journaling became sporadic, which meant all the crap inside my head just stayed there and boiled over and made my anxieties and inner Negative Nancy so much worse. I could’ve written anyway, at other times, and I did. But I kept getting distracted and barely get more than a paragraph, or look at the book and say “I’ll do it later on” and two weeks would go by.

My mind wanted me to get the pen and pour things out on paper, that little voice was getting insistent, but I couldn’t make my fingers grab the book or my body go toward it. I just somehow went toward pointless busy-work elsewhere, like I wasn’t in the mood to think and feel anything while my brain was begging for the pressure valve to be released.

Obviously, the bench wasn’t magical or anything like that, but rather, it was an “anchor point” to my day, a part of my routine I tried to build up and work around to get things started. A part of my day where afterwards I was like “bring it on” and eager to tackle some new thing.

Or some old thing. But either way, it was that feeling of being productive. That feeling I’ve been craving for some time, not wanting to feel useless and stupid anymore.

My routines of writing at my dining table sprung from those mornings outside. I could write a bit from the porch, but I can only move my furniture so many ways, and it’s hard to watch my dogs very effectively when I’m up there, with a huge wall behind me and my explorer-girl eager to make new friends or go sniff around for dead stuff or junk food someone threw out of a car (her farts are very unpleasant after finding some).

I went online and managed to find a replacement bench that has a pop-up table built into it. This time instead of a beautiful wooden garden bench, I got a metal one. I just hope the leg tubing can take a bit of a hit from a stainless steel chain in case the dog goes nuts and gets a running start. Of course, I’m thinking about other things I can put around the bench to prevent the dog chain getting snagged in the first place and all that, perhaps some more gate stakes that I can put slightly away so the chain catches them. 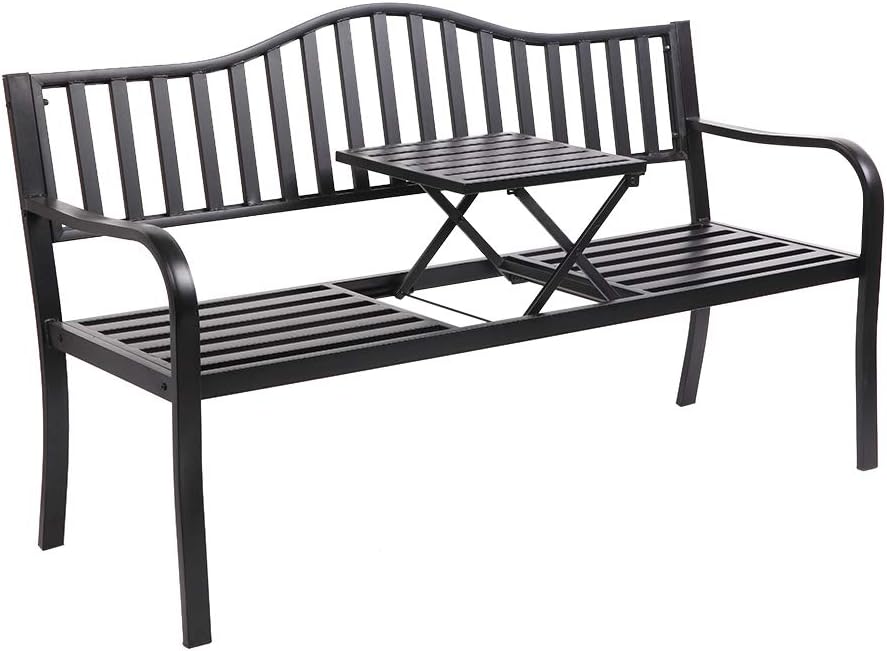 Well, I know what to order and pick up from the hardware store next time around.

I realized the missing bench was a small, yet pleasant marker of time well spent. Somehow, even with that little 30 minutes of my day (and a cup of coffee), out with the dogs in the early morning, and my journal… it just made the day start out productive, and once you get one thing done on time and get your brain going, the rest just seems to want to follow.

At least, that’s how it seems to work for me.

Just kinda sucks that I’m gonna have to wait about a week for it to come in, put it together, and sit it out there. I have that metal framed fake-wicker furniture on my porch with a love seat, but if I moved that down there, those thin little legs would snap like twigs if that dog accidentally wrapped his chain around them. No way in hell. The only thing I can think of is the gray wooden bench I had to move out of the kitchen for the bird cages. I could temporarily use that each day and put it back in storage. It’s definitely not meant to stay out in the weather, and I’m putting it in my shed as soon as I can make more room.

I’ve got lots of changes starting tomorrow. I did a good start today by making lunch (just heated up a lasagna and garlic bread, but made lunches for the week) and cut up some fruit for smoothies and yogurt. I cleaned as I went and suddenly the mess just wasn’t as unsurmountable as it had felt before. I also wasn’t eating out of boredom all day (though a bit more sugar than I’d like, but baby steps) and barely hungry. I hadn’t been healthily hungry for over a week because of my digestion issues, but today I actually woke up wanting something more than coffee, and I took my time to make something small and eat it.

I suppose this IS going to be my week.

I hope so, because tomorrow I’m getting back into exercise, making my meals, writing, job hunting….

That’s the thing I missed that month and change when I was doing pretty well for myself. I got up early to exercise, cleaned up, changed, let the dogs out, and got my coffee and my journal to go out there and write. And when I was done with that, back to my dining table for the day’s writing and brainstorming session.

I couldn’t believe how simple it was. I mean, a bench outside with some coffee and a journal was what helped anchor me to the day ahead? I guess it was like meditation doing that, a piece of quiet routine that I’d been missing and it had only made me more restless for it’s absence.

Well, I’m going to remedy that. Prop the gray bench under the tree for tomorrow morning, go exercise, and play with the old routine again to see how sustainable it is. I hope it works out, because that was the closest I got to my dream of being a real writer and living as one, and perhaps I really will once I get that mojo going and build up those ideas again.

A little anchor point of free-flowing emotion and thoughts before the work day started. No wonder things seemed easier to achieve–I got a chance to get all the gunk out of my head, good or bad.

And it’ll be really nice to have a little cushion in the seat and a short table that the dog couldn’t accidentally knock over!

One thought on “Building that “anchor point” in my day; or, getting my mental schedule back on track…”