I suppose this is a dual question, because the inverse would be “what would’ve happened if Bugs Bunny FINALLY took that left turn?”

I’ve always wondered that. I think half a dozen times or more you have a cartoon segment that has the ground pushed up in a path. Bugs pops out of the hole, looks around, and then gets a map and says “I knew I should’ve taken that left turn at Albuquerque.”

And no, I am NOT even gonna attempt to write Bugs’ phonetic version, even though it’s far more charming.

I’ve been bugged by that since I was a kid. Seriously, what was it about Albuquerque that made him go right or up or something?

My theory is that the vicinity of Albuquerque must be a warp zone or alternate universe generator in the cartoon world.

And I don’t seem to be the only one who’s considered it!!!! 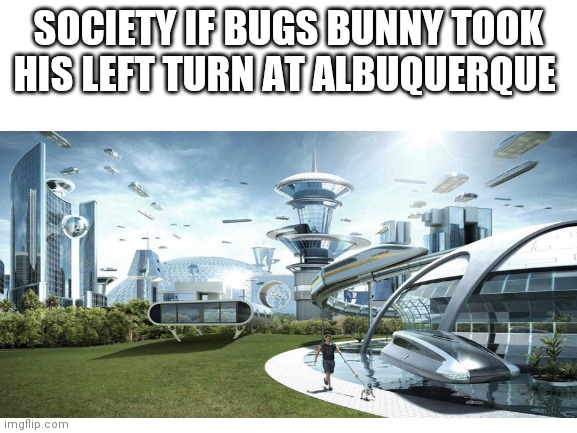 Going left might’ve kept you in the normal, present US of A. When he HASN’T taken a left (every darn time), then he’s ended up in Transylvania, or a bullfighting ring in Spain (or Mexico? Been a while since I’ve seen it), Ancient Rome, Tasmania, etc. Somehow, that deviation in his tunnel direction seems to have sent him to another country or time.

I haven’t watched newer incarnations of Looney Tunes much, so maybe they’ve answered this question. I wonder if there’s a cartoon segment that has him actually taking that left at Albuquerque for once. Hmm…

Just curious, folks who’ve grown up with The Bugs, The Daffy, and the rest, have any of you wondered why Bugs never took that left turn, or what would’ve happened if he actually did for once?