My entire past week has been something for my mental record books regarding bad behavior (toward myself). Cue a mysterious ailment and I’ve gone off the deep end. I’m sitting here now, trying to just breathe in and sip a bit of 7Up to settle my messed up stomach after a week of terrible eating behaviors, today’s being the worst yet.

The ailment’s not mine, but my dog’s. Last night she really wanted to go out around midnight to pee and I didn’t understand it (then again, where she prefers to go is pitch dark, so I figured she actually didn’t go when she was supposed to three hours earlier). But she went around to various spots, squatting and doing her thing, at a distance where I couldn’t really tell what was up. But then this morning, I literally stepped in evidence of illness and smelled some other evidence elsewhere (did a LOT of cleaning and spraying this morning). And I figured since she had issues coming out both ways, I’d better get her to the vet. 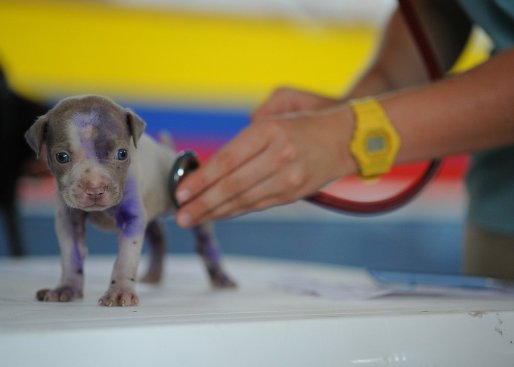 She wasn’t lethargic or anything. In fact, she was bouncing around excitedly when she knew we were about to go. I almost thought that maybe I was overreacting a bit because she was moving fine, but I remembered that 10 minutes earlier when I was getting stuff for us to go out, she was at the door with me and acted like she really wanted outside. And it didn’t take long for her to run to a few different spots and do similar to what she did in the dark last night. That made me believe that perhaps I’d caught the beginnings of something REALLY bad.

So, not on the schedule means a wait, but she was excited to go and meet everyone and sniff everything, so I just let her be (and also didn’t want her feeding off my worry). Her poor brother wasn’t happy to not be going, but I couldn’t wrangle the both of them today for this kind of wait. So when I got a chance to tell the story of everything I could recall that had happened since last night to the vet, they were alarmed and needed her to stay and be boarded so they could put fluids in her and check her out.

I was afraid of that, but prepared for it, too. I mean, when you’re losing a lot out of both ends, the dehydration’s bound to end up a serious symptom. I figured maybe there was something bad she ate, or whatever, but I didn’t smell anything weird on her or her breath, and can’t figure it out. And I got worried that maybe I HADN’T caught the signs early after all and she’d actually been having this issue a while, and today she just couldn’t contain herself to getting rid of the evidence outside anymore.

I remembered that she’d been a bit more needy the past day or so… but I can’t remember how long. Like she wanted my attention a lot (usually in the hottest part of the day) and would bark at me sometimes. So, I just took her out and did what I could, and her brother, of course.

And that made my heart sink. I tried not to show it, but she REALLY didn’t wanna go back into the kennels. She probably figured she’d been bad or something because I hadn’t had to put her in her cage for ages. It happened so fast because of the concerns, so I helped her go in there, paid, and let them do her thing.

But the thoughts kept coming back, like a broken record.

I had to remind myself that the old dog that had similar problems had been having them off and on for several DAYS, was lethargic, and whimpering a lot. My girl hadn’t gotten that far, so I kept trying to tell myself that she got a bug or something and was getting fluids to hydrate and we’d probably have to do a special diet in the next few days.

The house just feels so damned weird without her here tonight, and my other dog’s just been lazing around as usual. I wonder how the morning’s going to go with these two, and I hope like hell I can take her home tomorrow evening and we get back to creating a new normal together. I did go home and get a blanket that had mine and her brother’s scent on it, one she’d been laying on off and on the past few days. I figured with her abandonment issues, she would be at least a little comforted that something familiar–even if it was just a smell of home–was around.

I wonder if she’d be thinking of something similar to that, but with a human in the mix…hmm…

I sat with her about 30 minutes, and it was the most calm I’d been all day. She was quiet and wasn’t itching to get out or anything, but I also had the cage door barely open so she couldn’t try, and I arranged the blanket behind her so she could lay on it if she moved back later. I pet her and talked to her a while and she had that happy panting going on, so I figured that maybe she’d be okay. I hated leaving her, but I know I’ll call tomorrow in the afternoon and see how it goes. A good 24 hours and change is probably the best idea, at least, it makes sense to me.

Of course, if it goes much longer, I’d be a worrying mess and I know it. They’re closed on Thursdays so that would mean another day before I could even try to get her back.

And that thought made me feel worse, because then it means it’s not just some stomach bug and/or dehydration, but probably something much more debilitating.

The worrying kept going and I was doing my best not to get into a frenzy in my head. And that manifested in one of the worst bouts of junk eating I’d had in ages. I felt self-destructive, pissed off, and hurt that I might lose my dog soon and my boy would lose his sister. He’s been so quiet all day, and it was strange how when the delivery person came, he was so quiet and didn’t even bark or anything.

No point without his sister there, I guess.

I think he’s bored off his ass without her around, and it makes me worry in case she doesn’t pull through.

And here comes that thinking again.

But where’s the line between understanding that something may happen and going straight for the worst-case scenario? I mean, I’m definitely offended by people who insist on a happy face all the time, even when life loves that shade of gray. But it’s no better to have the Debbie Downers all over the place, either. There has to be a middle ground between understanding that something bad could happen and acknowledging it vs. seeing that bad thing as an inevitability in 0.2 seconds.

I have to sit there and remind myself that we all get sick at times and might need a hospital stay, even animals. It just alarms me how much one part of me snapped, gave up, and I proceeded to inhale junk food like it was going away forever… and I don’t even LIKE it anymore. But in times of duress, it somehow just shows up, and my brain won’t stop til I’ve had some.

I hate dwelling on the negative, and I know it happens more often than I can even think. That scares me, because it also means that it’s gonna be a lot harder to live healthy if every major event can have me spiral out of control mentally (and financially–those junk foods are damned pricey).

The only thing I can be assured of is that the day was so draining, physically and mentally, that I’ll probably crash into bed in just a few minutes without a problem. I’ve got so much to do (like hours of stress cleaning to distract me from wanting to call and check on her every few minutes), so my morning will be quite full… and require some light meals to get over the damage I did to myself.

That’ll be interesting: the two hairy ladies of the house having a slow, stomach-healing diet together. Hmm…

Maybe I can dream up some positivity in the next few hours. I’m going to need it for our recovery period.

5 thoughts on “When negativity gets you to vacillate between numbness & catastrophizing, & then throws you overboard…”