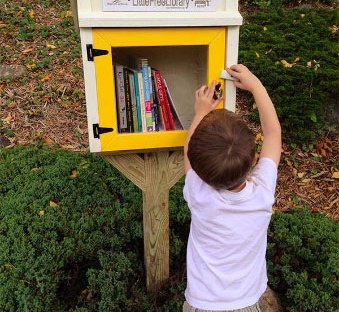 Well, when I mean running out of books, I mean those meant for kids. The shelves of books I hold in reserve that I bought myself over the years for kids to read, not my main collection.

I have a handful of families that started using it when I first put it up almost a year ago. Especially with the COVID mess and school closures going on, I figured it was a good idea and something for the kids and adults who may want to read. I live out-county and there’s only one other Little Free Library in my zip code, and it’s much closer to town.

Well, it was going pretty good the first few months, and I was able to talk to some of the parents and kids. As time went on, I think only 2 families were really using it. And now I think it’s just one.

My big concern was when talking one day, right in front of me, her kids scooped out EVERY kids book and took ’em like “ooh, I wanna read all of these.” I was having three conversations at once and a bit too startled to comment, but I noticed after that, not a single kids book has been returned. That was in November.

I’m near the head of the street and don’t go down to the cul-de-sac unless I’m hunting down my dog who broke loose, so I don’t really know who lives where or their names on my half-a-mile long road. I guess I went really passive-aggressive, but I got a sheet protector and taped a sign to hang out of the bottom of the door, asking people to please take 3 books max at a time per person to borrow, and that I was running low on books because returns have been slow lately.

Non-existent would’ve been more accurate, but I wanted to be nicer about it and not act like I was singling certain people out.

As long as that sign was up (and that particular family did see it because they drove by it slowly and one of the kids read it aloud), not one book moved. That kinda made me concerned because I was hoping some kids would use it and I wondered if I was being offensive or something.

So, once the elements basically messed up the sign the second time when it was nearly February (sheet protectors aren’t waterproof, after all), I didn’t bother to replace it, figuring the point had been made (though no book had been returned and added to the pile yet). I did notice that that family vehicle would drive by slow, but not stop, even when I had the box filled with kids books. I think only one person stopped to drop off books, and it was from their own stash, not mine. That was early this month.

But I think I realized this family was taking advantage of free books, and probably not wanting to ever return them. I saw them through my living room window finally stop last week and the kids came and took some out. I hoped they’d put some back in, but the tree was in the way so I couldn’t quite tell. But when I went out there later, nope. They scooped a bunch out again, but left a few.

I figured they were waiting til they thought I wasn’t looking because the other times they drove by, I was outside with my dogs, reading on the bench, or working in the yard. They didn’t even stop or act like they were. And then today, I noticed them again stop by the box. I guess they figured I was too busy and I just gave a distracted wave (my dogs were out to greet them and get pettings, which is how I knew they were sticking around a bit). I kinda was because I knew it was going to rain again and was trying to figure out where I left off on feeding my plants. I wasn’t watching them, but I hoped they put more books back.

Nope–took a few more of the books they passed up the first time around.

And I’m starting to quietly seethe.

Don’t get me wrong, I love reading. I love when other people are reading. I want kids to read.

But I can’t afford to keep buying more kids’ books! I usually have about half kids’ books, half adult books in there, and I don’t think a single adult book has so much as moved (the two dropped off by strangers were adult books). I have a cheap 2-tier bookshelf with kids books left, and at this rate, if have to add or swap books out twice a month, I’ll be out by the end of the year.

I got my own stamp to put inside of the books that says Little Free Library and the motto “Always a gift, never for sale.” I’m starting to wish I didn’t get that motto put on there because I’m sure they can twist it to mean “oh, it was a gift so we don’t have to give it back.” It’s implied to mean it’s a gift to the community and don’t try to resell the damn book. Would be kinda hard to miss that huge stamp I put in the front, anyway, from any reputable bookseller.

And I hope like hell they didn’t try to drop ’em off at the local library. Doubt they’d give ’em back to me if someone made that mistake, even if it had my info on it and would take a huge sticker to cover up my stamp.

I’m just getting discouraged and feel like I’m going to lose it. It just feels like now one family wants free books, nobody else uses the darn thing, and I spent a lot of money trying to do something positive for a community that doesn’t seem to give a shit about reading. I was sure they understood the purpose of a library is to borrow and return, not keep books for 6 months or more in the hopes that I’ll forget about them.

I would’ve had a hard time keeping my passive-aggression in check if I’d gone over and talked to them about running low on books, which is why I pretended to not know they were there this afternoon.

I want to keep it going because maybe others on nearby streets (I’m several miles out of town) will have a chance to discover and enjoy it. But if books never make it back into the box, that’s hundreds of dollars of expense (because kids’ books are crazy pricey unless you get discarded library books like I usually do) that I can’t do anymore. I want to keep it going, but not just to fill one family’s bookshelf for free while other kids who might come by can’t get anything interesting.

I’m trying to figure out a good way to word a sign or placard or something (maybe I’ll get a piece of balsa, paint it, and get my woodburning kit out and make it a permanent one I can hang from hooks underneath–ooh, project!). I just can’t figure out how to keep it short and sweet and basically let people know this is a box for sharing books, so please only borrow 1 or 2 at a time so our neighbors can enjoy the gift of reading as well. Borrow a book, return a book policy, something like that.

I just know I’m starting to get that feeling of dread every time I go to swap out books and add to it, how many will be gone and never come back? I mean, I’d love to buy the occasional new book–sometimes there’s a great deal where I can get a brand new kids’ book for a low price with some other books (I can stretch those B&N coupons and sales pretty good when I need something for myself, too). But I’m not dropping $8 or more a pop on new books that I’ll never see again. That adds up way too fast, and I’m penny pinching big time right now.

I’m really hoping to not pack it all in by next November and when the kids and parent ask what happened, I end up being a little too honest (though still passive-aggressive) and say “Well, you can’t have a library if you have no books, and not a single one has been returned, and I can’t afford to buy any more books to keep it stocked, so I have to shut it down.” Though if I saw some semblance of shame in their faces, that might make be pretty damned gleeful on the inside, but I’d still be out all that money, so it would be a hollow victory, even if there was remorse.

But then again, so many people act like if you’re not caught, it’s not wrong, so who knows.

But seriously, anybody got any idea as to what I could put on the sign (short enough I can print/burn it big and they’ll read it)? I like doing nice things for people, but it doesn’t do me any good if I go broke trying to do it. And to top it off, I despise thieves, and this is starting to feel like it’s getting closer to outright theft territory every day.