I’ve always wondered something about the construction of manufactured homes (or mobile, whatever), or at least all the ones I’ve lived in and been around. Some are freaking fancy and maybe have a few dozen upgrades compared to mine, but at least if I need something worked on, it’s easier to replace.

At least in this house my water heater is inside the house instead of some sealed up partition accessible only from the outside, like my last one. My walls are made of those wallboard panels, and where my water heater is, there’s a piece of wallboard with that bend and shape plastic slip-on framing around the edges to stop friction from wearing away the edges and making them powdery and ragged. It was screwed into the wall to cover the water heater compartment, and I had to get the screwdriver and unscrew the panel from the wall just a few months after moving in. The water heater had malfunctioned big time and I had to keep it open for the maintenance guy and spend a week drying it out with the help of fans as a precaution.

When there was an inspection, I had to unscrew the panel again and check the connections and make sure it was all kosher. The problem is, those screws don’t line up well anymore because the weight of the panel and the repeated re-attaching created bigger holes that got smoothed out. I could’ve just basically hung the panel on with those screws, but it would’ve made it worse and possibly broke the panel, leaving that ugly hole exposed for good.

When I was getting frustrated with it, I started to wonder why an air conditioner system had that vented, thin aluminum or steel (I suck at deciphering metals in construction) doors with catches on the inside, but the water heaters don’t. I hoped to find one of those doors to just make flush to the wall and latch it in place to keep it from swinging open, but no such luck. They don’t sell those doors like that at big box home improvement stores.

It hit me a few days ago: why not turn the panel into a door?

I waited until pest control came and found openings to exploit and laid down bait stations (including behind the water heater, which had plenty of exposed holes around the floor pipes). Then I went to Lowes and got some better hinges than the ones I had already (don’t remember where they came from, but these I could swear by.

But first was those flimsy edges on the panel. I got a razor and cleaned up where the board or paper had buckled and was warping the edge. It wasn’t going to be perfect, but I wanted the plastic edging to not flex and bend and move around when I tried to mess with the panel (that was the biggest issue of annoyance–it moved too easily and I nearly broke that heavy-ass panel twice). So I got my handy Gorilla Glue and got the edges bound together. I had some gardening to do and some tools to let my neighbors borrow, so I waited a few hours for the glue to set up and not be tacky anymore.

After that, I got my awl and made holes through the bracket holes that the screws would go into. The panel is thinner than the original screws were (and I didn’t want to accidentally snag myself on exposed sharp pointy screw ends with my elbow or hand or something down the road), so I switched to the shorter white ones that came with my other hinge set. They were just the right length. Then I screwed the hinges and panel to the wall, using a book to hold it up off the floor so I wouldn’t have it scraping the floor when I had to open it (I still have to clean up the excess foam from covering up a mouse hole a few weeks ago, too). Besides, nobody’s gonna be looking to see two different colored screws, so who cares? it’s why I attached it at the back of the panel in the first place. 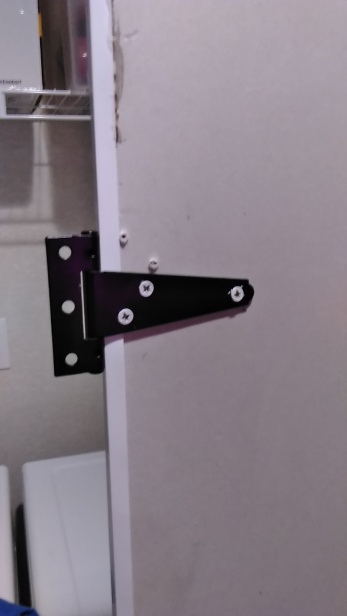 Yeah, you can see where I tried to use different hinges, but the design didn’t allow the panel to be flush with the wall, so I changed ’em out.

But to keep it closed? I got a hook-and-eye and screwed them into the wall and panel door respectively. I probably could have nudged the hook base a little further to the right so I didn’t have to have it work in such a weird way, but it works. I almost put a handle on it, but I figured that would be an extra nuisance I didn’t need… especially since when I don’t have the hook in the hole, the panel wants to swing open anyway. The hook makes it so I don’t absolutely HAVE to have something in front of the panel to keep it closed, but I’ve got my drying rack, laundry basket, and dog food containers in that corner as it is. They take less than 10 seconds to move, so it’s not a big deal to have ’em there in case of an emergency.

I’m just glad that little project makes the room feel just a bit cleaner. I don’t have to worry about panels falling over or powdery pieces falling off during handling. It was just a necessary thing to take care of without costing an arm and a leg. I figure the hinges and hook-eyes all cost less than $10 together. Much cheaper than getting a steel or aluminum door with ventilation that you can’t just pick up from a hardware store. I don’t even want to think what a nightmare it would be to try and get around THAT kind of installation, only to put tons of holes in the wall and declaring defeat.

I’m worn out after a full day of work and movement, so this last project of the evening was definitely the cherry on top. I’m just glad it worked out.

Of course, if I hear a thud, I know it’ll be back to the idea board in the morning. And then I probably WOULD have to resort to some kind of short door in front of the spot. But so far, it’s sturdy as can be, and I hope it stays that way.