I’m guessing a lot of folks responded to requests to curb their power usage from the news stations and the energy companies yesterday, because a few million more got their power back overnight. Not that the energy problems are solved by a long shot (Galveston’s probably in the worst of it because of their isolation as far as extended outages go, and I hope they’re far enough south that they don’t get much if any of Violet as it passes through in the next 24 hours). It’s supposed to dip back into the low 20s tonight, which means the strain’s gonna up the ante a little.

I turned my water heater back on this morning and will research whether I should shut it off again. I am keeping my thermostat at 65 degrees max and below and keeping the layers going. I can’t stand a boiling hot house, and I used to have so many power outages before in the middle of summer that I can’t stand too much heat in the house. And I’ve got the fireplace, so if I’d prefer an extra boost of heat, I can use that. Gonna keep it at the ready, anyway, just in case.

Nobody’s really moving around outside (probably all got the sniffles or just want to stay warm in case we lose our power again). I took the dogs out about three hours ago and it was so quiet. The wind was biting, but infrequent, and I’m sure I looked strange out there with long sweatpants, two hoodies and a fluffy bathrobe with coffee cups all over it tied around me. Most of the ice is gone from the steps, and isn’t slick anymore. Just a few chunks I can sweep off later, or let melt further.

I’m guessing no one wants to go out, also, because thanks to all the melting ice, our yards and walkways are squishy. I’m a little annoyed I forgot about my two birdbaths outside and the weight of the ice busted the glass basins. So, that’s another thing I have to add to my spring list. At least it’s thick glass that comes apart in big chunks, so I don’t have to worry about cutting myself on residuals when yard cleaning in the spring.

It’s tonight I’m curious about, and while I browse YouTube and take notes from Masterclasses, I’ve got the live news stream on in another window. I’m still using as little energy as possible, and since it’s daylight, that’s far easier to take care of. I’ve got extra blankets I can set out if needed and some thinner ones to drape over the birdcage tonight to keep the birds warm while they sleep. Because Viola’s on Uri’s heels, and the temps are gonna drop tonight. 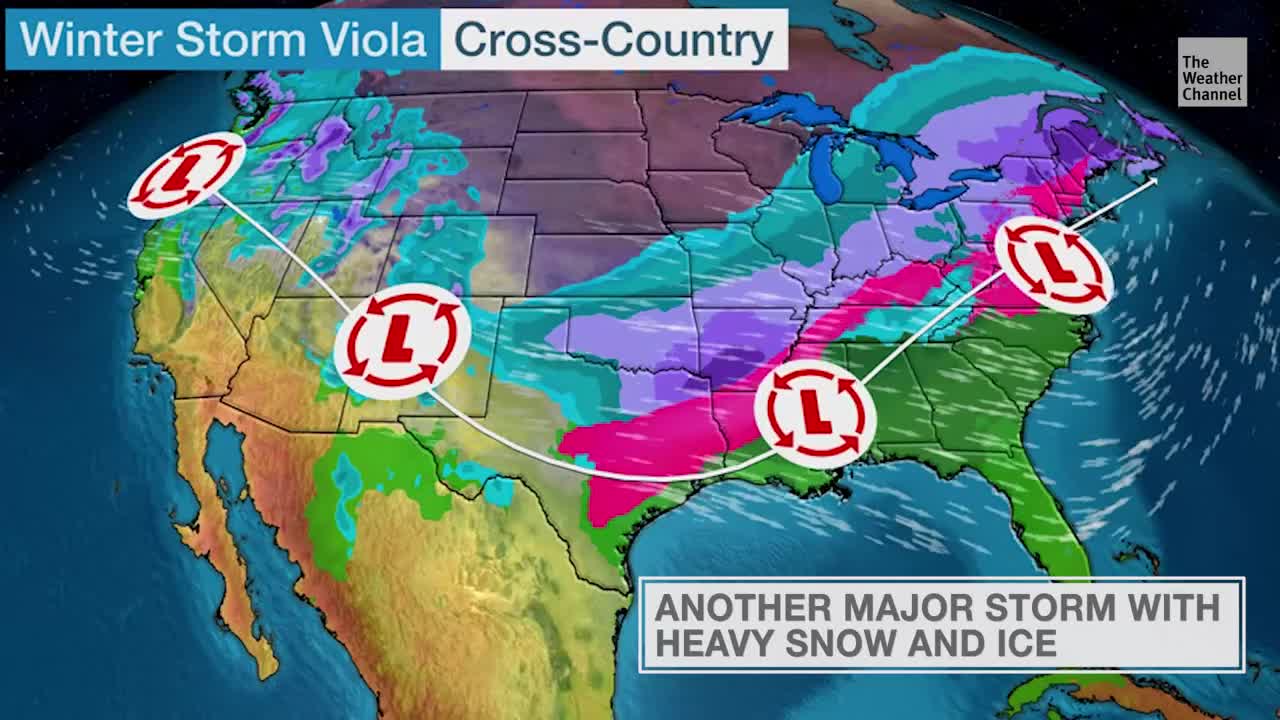 I’m not on the city grid for my water, so I don’t have the water pressure problems most are contending with. I’m sure all the busting pipes aren’t helping that much, and water treatment plants are probably struggling because of the power outages, hence the boiling water notices all over the news. It’s the uncertainty about the power situation and the length of time in case it goes out again. At least I’m on their text list so if there’s a minor outage that needs to happen to get some infrastructure taken care of and distribute electricity elsewhere, I’ll get a notice and can tell others. That happened when all those hurricanes hit Shreveport and they had to cut us off for a few hours to power the prioritized emergency services until they could fix or stabilize the lines there. Lasted a few hours, and was in the crazy heat of summer, but I get that. You sometimes have to circumvent some things to fix the bigger problem, then go back and take care of it.

Well, some places might be out til Saturday (Galveston’s city leaders are pissed off about that, and rightly so), and the boiling water notice is gonna stay in effect for most of Houston through the weekend.

The good thing is the roads seem far better today, so there are reports that grocery stores are getting supplied, even if in limited quantities. That’ll help some stresses right there for sure, and hopefully there’s a lot of water.

The bad thing is the roads seem far better today, so some people are a bit overconfident on the road and driving like it’s a sunny summer day rather than a cold road that probably has patches of ice that they can’t see. Last night there were quite a few stories about pile-ups and accidents, and I’m sure there’ll be much more of that today leading into this evening when the temperature drops big time.

I’m holding out okay here, and don’t plan to leave the house until this situation’s resolved, at least in the weather sense. I have plenty of food and I’m making clean water as I deplete it little by little. Stuff like this is why when they have a sale on Progresso soup, I go nuts buying. Of course, I’m using up my perishables first in case power goes out again and I don’t want to have to throw out food. Plenty of coffee, so no worries about the decaf Hulk coming out to scare anyone. 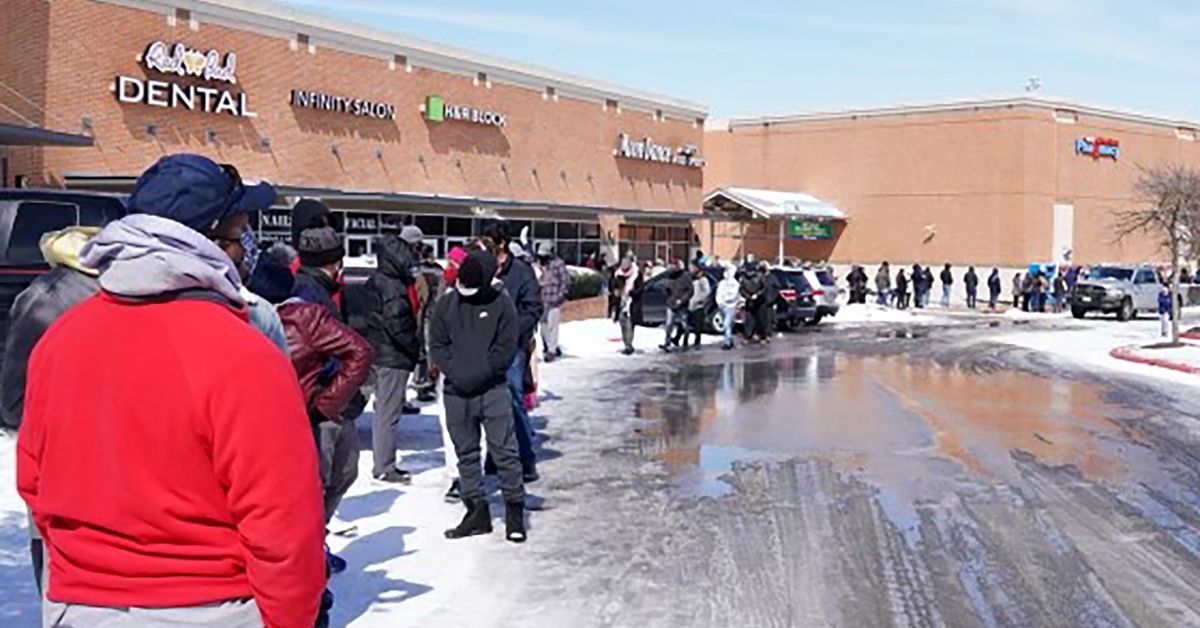 One of the dozens of news photos about getting food or groceries. If the quarantine preparation panic buying of 2020 is any indication, you know it’s gonna take a while for stores to be stocked well enough, especially with crap weather to contend with. I’m gonna wait at least a week before grocery shopping or getting takeout.

Just one of those things that the infrastructure situation seems to be improving, just in time for another storm to roll in and possibly halt the progress made. Hope the public works people, out in this cold and working during this crazy time are getting crazy-good compensation. You know they’ve gotta be stressed to hell trying their best to get things done right and fast.

And I really hope this event we’re going through is a swift kick in the ass to really re-assess how the energy infrastructure works in our state, and serious changes occur. Storms will happen, and people will lose power. That’s a given. But nothing this bad should happen again when there’s preparations and guidelines. Not again.

Be well, folks. Gonna do what I can and check on the neighbors real quick to see how they’re doing. Probably nothing to be concerned about, but we’ve got daylight and if there’s some insulation concern that needs covering, now’s the time to handle it.