I’ve spent days getting little done and yet having full days. I’ve also wanted the weather to warm up a bit so the water I’d need to put in my fish tanks would be warmer, too. Maybe I’m too cautious, but the quickest way to refill the tanks and get things balanced is with my garden hose, but when it’s cold outside, I am paranoid the fish will go into shock at such abrupt temperature changes. So, it’s either haul a gallon at a time from the bathtub, or wait.

Well, I’ve been cleaning the tank a lot more–the 55 gallon tank–and almost every day the past two weeks, 1 or 2 fish or snails have died. I’ve tried cleaning up and replacing a bit of the gravel and water where I can (and adding ammonia remover when I find a fish that’s likely been dead a while–can’t let those levels get crazy). And strangely enough, it’s been as messy as ever.

Me and that handy little magnetic scrubber have been working on different parts of the glass every three days it seems.

I tried feeding them just a little less, especially since they love to kiss the glass for bits of stuff or the gravel–gives them something to mess with. And I changed the filters out a lot more often to try and compensate for my inability to get a full on cleaning going on.

That should have been my first clue.

The flakes I have for the fish right now are red and some red buildup has been getting in my filters pretty crazily. So, that’s what started me cleaning more and more, a little each day for about a couple of weeks.

Today, I noticed in the long intake in the bottom (that it looked like some debris (uneaten food and poop and parts of fish that I didn’t get to early enough, I’m guessing) was visible through the intake slats. I took the big filtering machine and shook it a bit to see if stuff came out and it did (which the fish love to go and eat or play with at least). But then I saw a HUGE amount in there, still clinging, but more.

Playing a hunch, I unplugged it, carefully lifted out the whole filter and intake system from the tank and let it drain a bit from the hose, and took it to my bathroom around the corner. I detached the intake pipe and impeller and noticed the amount of reddish gunk on the housing. I took the whole thing to the bathtub and ran water into each part.

The sheer amount of debris that came out was amazing. I’m no longer surprised why my throwaway filters just couldn’t do the job–kinda hard to keep the outgoing water clean when the intake is gunked up!

I swear, I got every bottle brush I could find and the hottest water and hosed out every part, scrubbed it out, used the water pressure to knock it out of the corners… It took at least 20 minutes to clean up every part of that filter system, and it’s not a big industrial thing, just hard to clean sometimes. I’d looked in there a few times, but hadn’t thought to take out the intake and the impeller and hose them out. But boy, what was trapped in there had made a mess of everything. I bet it had been building up the past three months… and I’m sure most of it was dead bits of fish that got sucked in once the snails and rubber-lipped pleco were done with them. (I noticed that the discoloration and clogging problem didn’t start til after my little pleco died… like he wasn’t there to eat the rest before I could get to it or the filter did anymore. Hmm…) 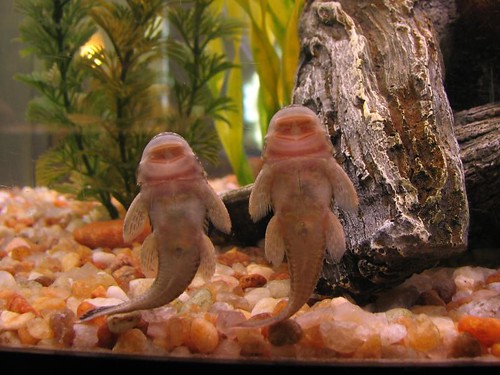 Not a pic of mine–I tried to give mine a “sibling” pleco twice and always found the sibling half-eaten within a week. Guess it was like the Highlander: there can be only one!

So, I had some pre-made filters ready to go, put the newly cleaned filter machine back on with the intake pipe down in the water, and got clean water to fill the reservoir. I plugged it in, let it run a bit, and then put fresh charcoal bag filters in.

It’s been about 8 hours since then and the tank hasn’t looked this clean in weeks. The fish are happier, and the bag filters don’t look like they’re already getting discolored.

I just can’t believe I missed something so obvious. I’m guessing it’s because the fish are reproducing so much and not eating their young (guess they’re generally too happy to do so), that I chalked it up to just too many fish in the tank for a while, at least til the numbers that died and were cleaned out would make things stabilize. But yikes, I just didn’t think about that intake and how with two 90 degree angles on it, yeah, it’s gonna be hard to clean or unclog unless I pull it apart.

This was a definite case of what’s been a bad habit of mine the past month: trying to deal with symptoms without looking for an underlying cause, and getting uber frustrated in the process.

Today I took many small steps, and am making my pets happier in the process (who knew?). Not steps that are going to one major goal, but rather like putting the pawns out on the chessboard and making them move. Eventually, it will lead to more moves opening up and more getting done. Some of that was outside, some inside today. I have had to celebrate small victories where I can find them.

I’m just glad the fish can benefit from this oddness, too.

It actually DOES look just about this clear and clean now. Good enough til the weekend.