Looking at my laundry list (no pun intended) of stuff to do, I realized with dismay that since the November weather was being so damned cooperative for once, I’d better be smart and get as many outdoor chores taken care of as possible.

And high time, too. Only needed one cup of coffee this morning because a dead snake scared the crap out of me.

And I had “weed eat around the porches and house” on my list today. Hmm… guess there was a damned good reason.

It had gotten tangled up in some bird netting that my mower had chopped up months ago. I’m a bit bummed because from what I could tell, it looked like a Speckled Kingsnake, which is good for rodent and poisonous snake control. But snakes scare the crap out of me in general because I’m not gonn stand there and Google whether it’s poisonous or not while it’s sitting there debating whether to bite me or not. I shot some BBs at it from my porch to make sure it was dead and then got a neighbor to help me make sure and take it away. 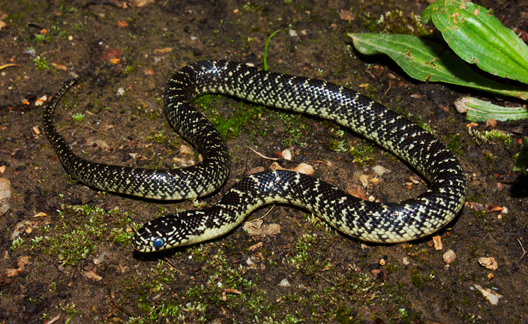 A Speckled Kingsnake, photo from animalspot.net

I was worried my dogs would try to mess with it and eat it, or other neighbors’ dogs would. I didn’t wanna see that thing torn up and strung out all over the place… harder to clean up, too.

So, after jumping three feet in the air over it and running, I got enough exercise that only one cup of coffee’s passed my lips. I’m waiting for my weed eater battery to finish charging (and the sun to dry the grass a bit more) before going back out there to weed-eat a bit more.

I kept hearing it might rain this weekend, but today is likely not the day. The whole point of cleaning up, though, was to stain the steps and the deck. I’d stained the deck last year and it already looks kinda lousy, like it just doesn’t want to stay clean. I guess it’s mostly the algae trying to get a foothold on the wood, or maybe because it was that really thin stuff I don’t like, but I went for something crazy to go with my house. I got a Rainstorm Blue house with Sandbar accent & alabaster trim… and the stain is Forestland green.

Of course, the application on the front steps (too many narrow gaps and whatnot) could use some touching up, but I was planning to do a bit of that today. Besides, the rails and such need another coat of alabaster badly because the rains came before I could finish the first time around, so the blotches of green that ended up on the railings when I was frantically trying to finish in the dying light doesn’t matter.

I’m so glad I picked that color. I couldn’t get a green or yellow house when I was picking colors (the most yellow I could get was “antique gold”, which looked more like dingy mustard). But blue house with green deck? Oh, hell yes!

So, my plan today (once I weed eat and make sure there are no more snake surprises around) is to hose off the deck of all debris, scrub it up a bit, let it dry, and then either today or tomorrow go staining crazy on that side. I already did some of the steps (I have two sets leading from my porch) so I could see how it turned out. I think it looks pretty sharp, or at least quirky and fun. I just hope my dogs don’t go jumping on the deck and messing around, scratching it up before I’d had the chance to really let it dry. I’m gonna block off entrances and such with the furniture I’m pulling off the deck when all’s said and done.

My neighbor’s kid gave me a mini heart attack yesterday when he came to return something and passed up the chairs and walked on the deck. It looked okay, no shoe prints, but easily could’ve used another hour minimum before anybody walked on it. I figured he wouldn’t have gone between the chairs I was using to block it (plants were blocking the steps the other way, which I did because I gotta level the ground before another person twists their ankle stepping on a sunken brick or pothole).

Oh well. Today I have to use those same steps anyway because I want to give my front ones a full 48 hours before I try to walk on them to see what the difference is and how well it all works out (and do some touching up with a smaller brush on the ends to seal the wood properly).

I guess I’ll have to start fresh on my story writing schedule on Monday. I kept trying to get back into it this week, but all these things around the house (and especially outside) just kept calling to me. I figured since it was being artistic–at least, color-wise–then it was time to just get that going while the weather liked me.

So I’ve got some nice jazz playing on YouTube with the windows open and that lovely fresh air coming in the house as I write this. I’m about to go back out there and get some more stuff cleaned up (and weed-eat; my dogs wouldn’t stop barking at the weed-eater so I had to cut it short and let them in). It’s gonna smell up the yard nice when I go to make pumpkin pie this afternoon.

But first thing’s first. At least the Todoist program I’ve been using the past week to organize my tasks and to-do list (and schedule) seems to be working great. Whatever I don’t get done I can reschedule quick, and I’m knocking a lot more off the list than I thought previously. Hope I can keep it up.

This has been a weird year. I hope this good weather for November trend goes on through to December, because that’s probably gonna be gray, wet, and icky (when not windy) enough as it is.