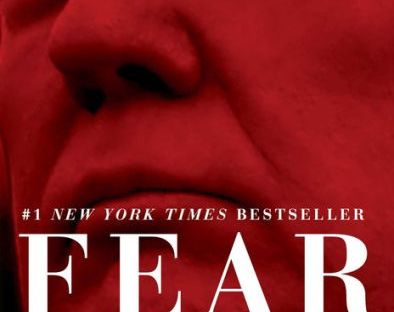 Terrible. And I DON’T mean Woodward’s writing (because he’s Bob-Freaking-Woodward, so duh). I mean terrible in the sense that as much as I like to think better of people, sometimes they can be far worse than you ever suspected.

Fear: Trump in the White House is about the year or so before his election until about March 2018 when debate raged on whether or not Trump should testify in the Mueller investigation. I’ll admit I’ve never cared for Trump, and plenty of my blog posts have had me call him Dump because the man infuriates me so much he’s like Voldemort and I’d rather not say his name. However, since his Twitter feed is so outrageous and the coverage was so overwhelming, I figured maybe there were some aspects to the man that I missed, and perhaps there was something going on that the rest of us weren’t all that privvy to.

Sad to say, I was incredibly surprised by what was on the pages, in the sense that what I figured I’d pieced together about the man was quite true. I’d hoped I was wrong. All the interviews with staffers and former staffers, the notes and the other publications that discussed the early days of his presidency, they just revealed things that made me cringe.

There is so much packed in these pages, all centered around Trump’s administration (not so much his private life, if that’s what you were wondering), and it’s interesting to see what staffers thought of him and how things changed, depending on where they were and who was involved in the discussion. The fights over the border wall, the tariffs, North Korea and China… all there. I felt a bit bad for some of the folks who went to work for him; others, not so much. They reminded me of my dad for a bit there: thinking he’s still in “campaign mode” and will become “presidential” any day. But that didn’t happen. We got what we saw, and so did they. And how the more they had to fight for his ear against each other, the more demoralized many of them became.

It was an administration of chaos from the start. These staffers had to fight to be heard, whether it was regarding trade, Afghanistan, the service economy, etc. They had to prove their points to a most incurious man who hasn’t changed his mind about anything in at least 30 years, and refused to learn.

A basic breakdown of what you’d find in there may not be all that surprising, but I gotta say, so dang much has happened the past four years that if you’ve forgotten what happened and when (as that time feels like a decade ago now), then this book will remind you of the events going on a couple years ago.

If you asked me to summarize the Trump administration in those days from what I’ve read so far, Trump would be like Jerry Springer: stir shit up and sit back to watch the melee. He did it to his staffers, the department heads, on Twitter… everywhere he could.

Even though I’m sure some folks will be like “yeah, we know what he’s like.” After reading Fear, I feel like I’ve been standing at the edge of a lake miles and miles wide, but when I put my foot in the water and walk, it’s only about an inch deep with each step. Not so surprising.

5 thoughts on “Fear: Trump in the White House, by Bob Woodward”