Granted, we have far more technology than they had back in those days, so it’s easy to look at what we know about hurricanes now and say what they should have done. But they had resources they could use back in 1900 and chose not to. A resource that showed itself to be damned accurate before Galveston had to stare down that hurricane.

The Cubans in their weather bureau.

If you’ve read the book Isaac’s Storm, or watched some of the more recent documentaries about the 1900 Hurricane, then you probably know about the efforts of the weather bureau in Cuba and how they were the best in the region, especially when it came to hurricane trajectories and changes in behavior.

But the U.S. Weather Bureau, which had Isaac Cline and his brother running the Galveston branch, didn’t pass on the info from the Cubans, who said the hurricane was going to go that direction. They had several days to update the brothers and issue warnings, but chose to discount the Cuban info.

Why? Because the U.S. Weather Bureau–which was barely a decade old, but soaked through with Victorian-era arrogance–thought it was so much better than Cuban folks who’d been on the islands monitoring storms for generations.

Folks in branch offices on the islands who were largely not-white.

You could say the U.S. Weather Bureau had an abundance of scientific arrogance that meshed poorly with a slight inferiority complex when it came to hurricanes and the Cubans. They didn’t want to look like they were relying on other folks to do the accurate forecasting. They could’ve easily passed it along and just not bothered mentioning it was from Cuba, taking credit for others’ work (I’m sure it happened plenty of times before).

They did worse than that, though–they left the Cuban reports out. They played politics over weather forecasting.

And Galveston and the nearby mainland lost big time.

Cline got degrees in meteorology and medicine, and believed the shallow waters around Galveston wouldn’t let hurricanes get too deadly. How, exactly, that was supposed to matter, I don’t know (or can’t remember). There is a relation between the continental shelf and wave height (and the spread of the surge), but I really want to know what the standards were for experimentation in weather.

I wonder if there were experiments regarding water wave action in 1900 or before in the U.S. I wonder what physics experiments were going on in the U.S. around the time and if any were in regards to wave action and behavior. The little I’ve found as far as lecture material (very little, granted I’m still looking) regards theories that weren’t laboratory tested, but just generally concluded.

Yeah, I know, science is tricky to figure out and describe as it is already, but heavens–when lives are on the line, it’s even more important to take from every source possible!

With the Cuban information attached to the U.S. Weather Bureau’s info, it could’ve led to more informed decision making. The Clines could’ve taken action sooner (Joseph tried to, but Isaac was the boss and a firm Bureau man who took the corporate line to heart that a hurricane couldn’t hit Galveston and cause much damage). They could’ve issued warnings and recommended residents leave the city or prepare in some way (since I’m sure they still figured it might not be “all that bad”) days ahead of the storm.

What that arrogant decision took away was time. Time to do something to mitigate the loss of life that was to come on September 8th and 9th, 1900.

That supremacist arrogance cost lives, and was a slap in the face to the U.S. Weather Bureau when word got out that the Cubans had it right all along (though they tried to cover that fact up).

Now, since that “guilded age” faith in science and continued progress (you know, the same crap every documentary spouts about the age of the Titanic disaster) was paramount all over the Western world, it’s likely few people would’ve heeded the warnings. Or they would’ve stuck with Cline’s assertion that it might not be “all that bad.” Since he was their resident “expert,” they probably would’ve stuck with him anyway.

But the Cline brothers would’ve been more informed. And that could’ve given them what they needed to issue warnings far sooner. And that could’ve prevented thousands from dying if they’d chosen to leave the city and head for the mainland til the storm passed.

The historical “what if?” game is a nauseating one, but this display of nationalistic arrogance always stuck with me and just angered the hell out of me. 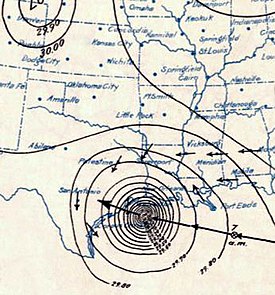 One thought on “When White Supremacy (and/or Nationalism) Gets People Killed: Galveston, 1900.”