I’d love to know why all my best possible ideas seem to come at me around 2 a.m. I was lamenting the heat the past few weeks (easily over 100 degrees F out there when you factor in the heat index right now) and how so many of my herbs that had shown promise at first withered like crazy in the change of fortune. Summer was just too much for most of them, and I might be able to get little scraps out of what was out there, but it got me thinking about something else.

Now, for weeks I’d been wondering about how to do an indoor herb garden. I’m guess you largely need dirt, water, and light because I was watching Gordon Ramsay cooking at home, and he’s got a well-lit kitchen, windows everywhere, plenty of daylight and the herbs he cooks with are in clear glass jars with soil and the greens he needs shooting out of the top.

That’s all well and good for him, but I don’t have NEARLY the amount of natural light he’s got in his kitchen. Mostly because I have cabinets where more windows would be welcome. But they do face south, which is a good thing.

I just wondered about putting plants on windowsills. And then realized with the amount of plants, that would be unwieldy and not work well. I tried windowsill kits before and ended up almost ruining the windowsill from water damage. Didn’t realize the planter had big cracks in the catch plate. That was fun, trying to explain the water damage to my dad.

And the way the dogs are with noises and other dogs running around, I could see them jumping up to the windows and knocking a bunch over all the time. Yeah, no way.

I’d rather not risk my house too much in this endeavor. And I like the idea that if it’s successful inside, then even in bad weather I can keep herbs close while I cook, keep the pests off of them easier, and smell up the place quite nicely. Especially if I get some rosemary and lavender in the mix. Mmm… if I’m lucky, those are still alive in the containers outside. I’ll swap ’em with fresh containers and soil inside, if that’s the case. The hummingbirds can appreciate the rest.

So, I went online this morning (when I should’ve been cleaning–damn, my procrastination levels are off the charts this week), looking for vertical gardens or ideas for them. There were actually quite a few very pricey things I didn’t want to even try out because of the size. But more than that–the height of them. They were either solid wood and short, or tall but not meant for indoor use because of drain holes. I wanted elevated beds, but ones I could have inside.

And then it hit me, which made me facepalm: Get one of those sets of tall, adjustable wire shelves (like I used to always get) and a bunch of containers to put her herbs in, and there ya go. 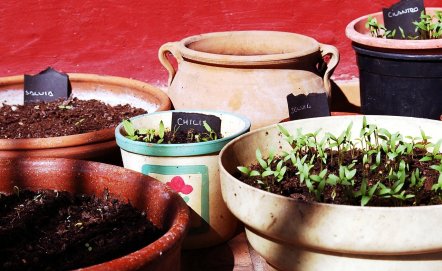 So I got me a 5-tier shelving setup (only using four because i want the bottom open for the dog’s cushion if she wants it). I just put it together and put casters on it so I can move it, sweep around, check the plants, and put it back far easier. It’s height makes it unwieldy enough as it is, otherwise.

So, that’s in front of one of my two “kitchen nook” windows and the parakeet cage is next to it. I probably would get more sun if I swapped the metal structures around, but then the birds would be too close to inconvenient drafts, and that just wouldn’t work for me. My big thing is gonna be ensuring that I can get a decent enough start for all these herbs.

And then I went out and got some more long, skinny containers to put them in. I did that because it hit me: carrots. I could start carrots indoors in long rows if I just had the right container to make it happen. I’m kicking myself for not thinking of it sooner, because when I tried them in pods or other individual starters, they just didn’t work out. They either drowned or the pests got to them before I could see a seedling emerge. With this system, they’ve got plenty of sun and time to grow, and I can have carrots of all shapes and sizes all the time.

Granted, I’m hoping I don’t go overboard. I also have some lettuce and kale plants, which I’ll probably start in other containers on my porch and then put in the garden proper when I get it all cleaned up. I was debating whether or not to just let the garden sit and me not do a thing about it til January (or at least, not plan on planting til the start of January). I was just gonna dig out the dead stuff and let it sit a few months under cut grasses and compost, getting a rest until round two.

The other good thing about having an herb garden indoors is with the herbs all inside, that leaves an extra bit of space where I can have containers growing in the middle of my asphalt garden. So, I won’t have to concern myself with building another garden bed anytime soon.

That’s a good thing, because it’s gonna take a lot of planning after I finally get things cleaned up around the outside some more and can take a good assessment of what I need to do first so all that work doesn’t go down the drain.

Well, time to get my floor picked up of all that shelving packaging, and get my potting table and soil and get started with the herbs that are coming in. Ah, how I’ve missed digging in the dirt. Just wish it wasn’t so damned hot all the time!