Possible parakeet parenthood. Yeah, I was tired enough to try and say that three times fast.

I’ve got four parakeets: Pickle (clearly a boy), Sky (girl), Nana (girl) and Aqua (debatable because of coloring, thought male, however). And there was some indication that I might end up with babies even if I didn’t want them because I already had a male and female to start. But Pickle and Sky didn’t seem terribly interested in mating or anything, so I gave away the parakeet nesting box when I realized they weren’t gonna use it.

Tomorrow, though, I might have to get it back.

I love hanging toys in the cage for the birds to play with. it gives them plenty of activity and exercise, and they fly around a bit and chase each other. One toy was originally ignored when it was just the two. I’m guessing they weren’t sure what to make of it, but they liked the easier shred-able “kabobs”. 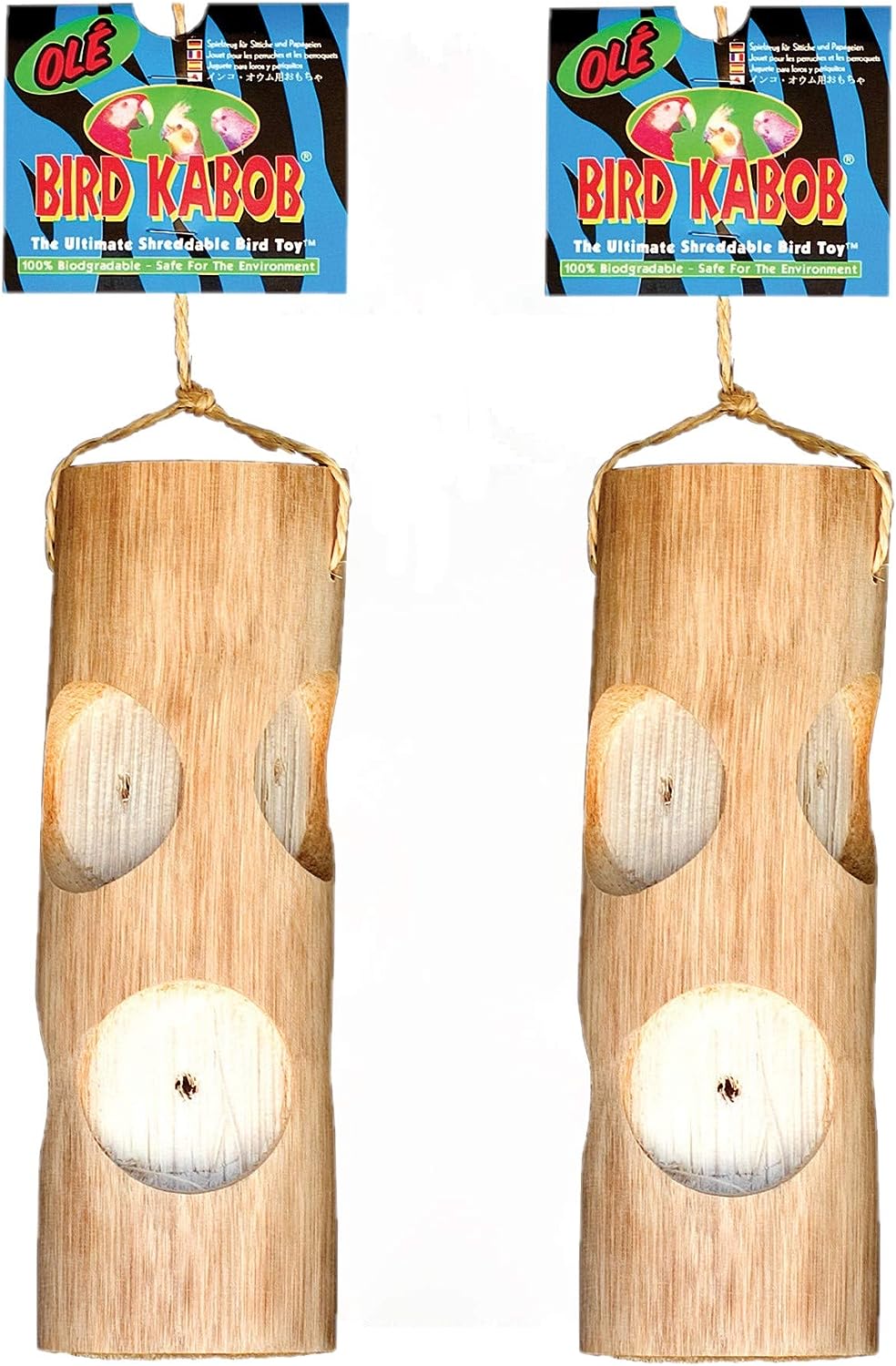 Yeah, that’s the new one.

It was funny looking at the dug-out holes and turning slightly to see a startled Sky staring back out at me through the other side of it. She REALLY got into tearing that thing up the past few days.

I should name her “the destructor” because a few days previous, I had a hanging platform in there made of woven grass. Aqua was the first one I noticed picking at it a little bit, so there were clear signs of nipping in the grass top. But early last week, in the same place I eventually hung the kabob, Sky had started unraveling it and tearing a hole in the platform. I’m sure most of ’em had a part in it, but every time I looked, it was Sky messing with it. I let it sit a few days because it was something to do, but it’s like she was determined to tear it up. Dunno why, but I finally removed it when she’d torn up about half or more of the bottom and chose to throw it out, but eventually I’ll re-use the plastic chains when their other toys become un-climbable or something.

I was worried that one of them might get startled, fall through the hole and hurt their wing, get stuck, who knows.

Well today I looked down in the much cleaner cage base and noticed something I couldn’t see before because of the prevalence of other types of debris. In each left side corner of the cage was a little pile of that kabob’s debris, under the grating I put down. Considering the kabob is hanging maybe 8-10 inches from the side, the debris wouldn’t naturally pile up in those separate corners.

That got me thinking–somebody’s been doing some cleaning at night.

I think it’s Pickle that I saw on the “floor” of the cage sticking his head through the square holes to get to things at the bottom. Either there were seeds he really liked that Friday or he was trying to find something to nest with.

According to my neighbor, it’s the males that get to building the nests for their mates.

So when I saw those two piles in different corners, still under the grating, but if there’s more debris it’ll pile up quick… yeah. I’m guessing I’m gonna be a grandma to a few parakeets eventually.

Which I don’t think I want and am darn sure not ready for!

I mean, if I knew my options right now, I’d be willing to part with them as eggs or when they got to a certain age. But I’d need a crash course in having to deal with mouths I hadn’t planned on dealing with in the first place. That cage could hold more… for a while. But I like the fact that the birds have plenty of room to fly and play, and they’re gonna get agitated if they have to share too much more space (if they’re not already).

At least I went ahead and ordered a handbook on parakeet care back when I first got these kiddos, but since they just seemed to be friends or siblings, I didn’t read much. Now I’m gonna be brushing up big time, and getting that nesting box back to set up pretty fast.

Oh man, I’m definitely gonna need some guidance if these little ones start dropping eggs, because either I have a 1 to 1 ratio of male and female, or there’s 3 females and 1 male… which will mean a LOT of babies in the future. Man, this could get tricky!

Well, I’d planned to start off my new year with a bang… but there could be some chittering and chirping to go along with it pretty soon. At least I love to research, so this might be intense, insane, or fun as all hell, now that I’ve got more time on my hands. Hmm…