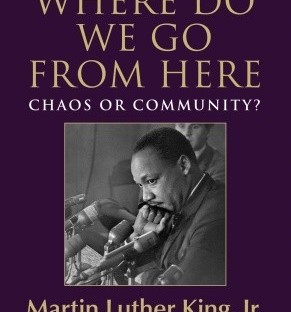 It took me a lot longer to read this last book of King’s than I thought it would, but that’s because it was so surreal and potent. Surreal because I had to stop and remind myself that this book was written in 1967 and King wanted certain things to go on. And surreal because the current protests and issues that have dominated the non-Covid headlines the past few months are what he was talking about way back then.

A shame that we’re not through this yet. It was eerie to read the same arguments coming out for a better and a just America.

Where Do We Go From Here is a book King sequestered himself away to write because of all his obligations. It hits on where the civil rights movement was successful (briefly), conflict with other black leaders who wanted a more revolutionary and active way to create change and make things better for minorities (and the use of “black power” and the conflict over that).

King is far different from his other books in this one because he’s grappling with the glacial pace in which things are changing. He’s trying to listen to those who insist on peace while learning from those advocating violence. he’s straddling the ground, but will keep to the peaceful movement. There’s a lot of ground he covers in this book.

King is trying to keep the community together, speaking often about giving whites a place in the civil rights movement, too, even though others may not care for them. One of the big themes he tackles in poverty, and how so many people have been stuck in it, white and black alike. Much of the second half of the book focuses on the economic issue and the need to improve the lives of those at the bottom of the barrel.

Strange how I’ve been hearing about the poverty issue for years, especially in regards to the black community, and it ticks me off that all these years after King’s death and we’re still here. Gah!

It was frustrating to read this book, just because of current events and knowing he was hoping for the best so long ago, but aiming higher for everyone. This is the book where that famous quote about riots or looting being the voice of the unheard comes from.

If you’re curious where King was going years after his “I have a Dream” speech, let’s just say some of Where Do We Go From Here isn’t what typically comes out for remembrance on MLK Day.