I was thinking hard about getting a second refrigerator to go in the house because of all the fruits and veggies I’m anticipating having to freeze and store eventually. I’ve got a watermelon the size of a golf ball hanging off a trellis, and four yellow crookneck squash off another plant. I have some bean pole plants really starting to produce.

This led to the “uh oh” moment–I’d better have a storage plan to start. And I figured that it might be possible to have another fridge in the house.

But then I began to worry. The only place I could reasonably put it is in the utility room in a little nook where a storage hutch is right now. And that nook is just a wall away from the other refrigerator.

So, that would mean a fridge, another fridge, a washer and dryer, the water heater, the air conditioner, and utility box all within close proximity to each other. I wondered if I’d risk creating a power surge and trip the breaker just by running a washer load.

So, I had to scrap that idea for safety. But it gave me another idea. I got a very basic refrigerator that didn’t even have an ice maker in it (which I don’t care about, usually that’s the first thing that goes wrong). But I have room for an even bigger refrigerator.

So last night I went looking–again–and bought one.

And holy crap–the amount of features they have on some of these refrigerators makes me cringe.

Seriously, when did something like a refrigerator become so damned complicated to plan around? You have to have shelves, space, refrigeration, and take proper measurements of your space requirements. The tech has been around for a century–how much more does it need improvement?!

Well, I’ll argue that trying to improve efficiency is always a good thing, so I’ll give props to how well that’s improved over the years… for most models.

But sheesh–SMART fridges? Really? You need to sync your phone up with your fridge to do your shopping list now? 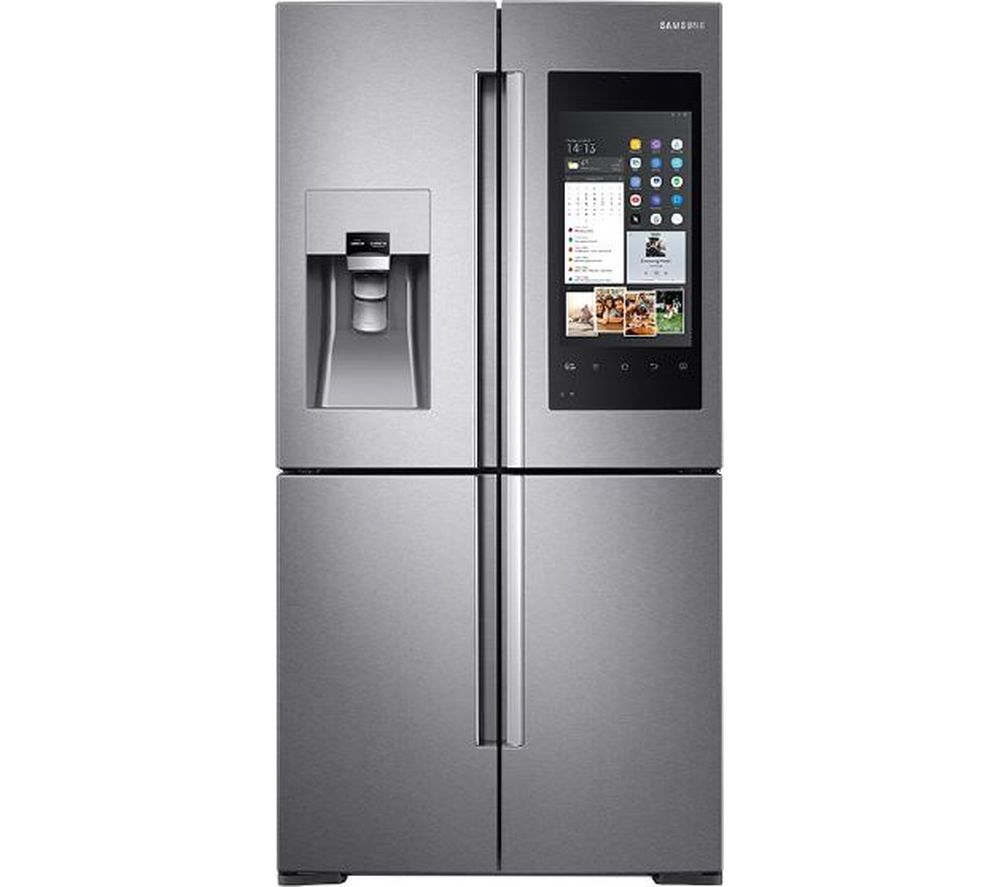 naturally it had to be a Samsung that would have that, though I saw several others (photo from currys.co.uk)

Trying to buy a refrigerator is almost as hard as trying to buy a new car several years after the last one: they’ve put in so many bells and whistles as standard features it’s frustrating. It feels overrated. And it just means one more thing to go wrong.

I never would’ve thought that a refrigerator/freezer could cost up to $3000–EVER. Even on sale. I just have to shake my head and be glad that I took a long time making my decision.

There were three things I was looking for: a top-bottom configuration (I hate side-to-side), a huge freezer, and plenty of adjustable shelf space in the fridge. I could’ve done without the ice maker, initially, but when I noticed the bottom-drawer freezers all had it (and how the hell was I gonna get the ice cube trays and go to town making ice in that thing?), I just went along with it.

At least I got an extended warranty.

But sheesh–they had these huge models that were not very deep at all. From the outside they looked okay, and the freezer was huge. But I was startled by how puny the inside of the refrigerator was–no depth at all to it and I could think of a dozen meals that would go bad if I tried to use the darn thing.

Eventually, after hours of narrowing it down (that is, after days of research on the internet first and then walking around the store), I did it.

I got a purely middle-of-the-road (price-wise) model that had a few extra perks I didn’t think I’d be good with, but will save me loads of room in the long run. It’s easily 10 cubic feet more than the one I’ve got, which will help immensely trying to keep everything together. I might still need a small chest freezer later, but that’s likely a next-year thing (and maybe I can keep it outside on the deck if it comes down to it).

But at least I won’t need another full fridge.

This one has a way to save energy by not letting all the cool air out, a kind of double door on one side. I like it because all the obvious stuff I need most I can put in that front door section. The door shelves are very deep and I can put all the condiments there. The mini door will have the stuff I need to cook with that very day, which is great because I’m constantly a victim of “out of sight, out of mind.”

Kinda hard to let veggies and fruits go to rot if they’re staring you in the face. And I won’t have to shift everything around constantly when I go to cooking for a week’s worth of meals and have pre-packed salads and microwave meals ready to go.

Yeah, I am getting it in a few weeks. But it was the constant back-and-forth on features. Thankfully I found one without the stupid water or ice dispenser on the outside–it takes up far too much room on the inside that I’d rather have for food or drinks or whatever.

At least I can be creative with the space I need, and am in major cleaning mode for the next couple of weeks til it shows up.

I just can’t believe all the crap they have started adding to these appliances the past 10 years, especially refrigerators.

Yeah, that was probably the same face I was wearing half the night…

Have any of you had an issue trying to find the right refrigerator (or other large appliance you needed to replace), only to be baffled or frustrated (or giddy over) the new features that have come out?

Just curious how you handled it and what you think about ’em. Floor’s yours…

One thought on “Q #142: How the hell did buying a refrigerator become so complicated?”