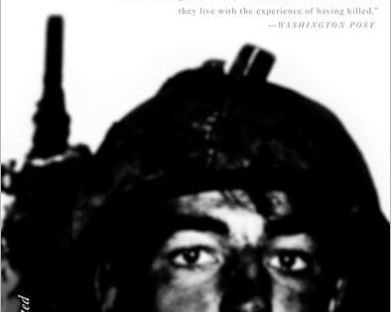 I’ve had this book on my shelf a few years, and was planning to get to it eventually, but deaths at the hands of police made me pick it up right away. I had taken far longer to get through it than I thought I would, largely because I was kind of dreading what I was going to find, especially after John Oliver’s impassioned show on law enforcement two weekends ago showed a clip of Grossman doing a seminar for cops… one that really disturbed me.

I got this book because I listen to Dan Carlin’s Hardcore History, and his podcasts about the world wars referenced this book. Also, a new favorite, Beau of the Fifth Column, has recommended this book for people who want to understand the psychology around killing.

On Killing is precisely that, a book about the psychology of killing, mostly in regards to warfare. It answers the question of how can a basic, ordinary person go from a farm or a store job or construction job or whatever and in a few weeks or months get the training and ability to go out and kill an enemy. This wasn’t very easy and less effective than a lot of military wanted to admit (at least, in Western sources) for the World Wars and even before. Vietnam was a major shift, and leaps in psychological training helped.

If you’re a fan or war movies and such, especially when you get to earlier wars like revolutionary times, the kill ratio was pretty low. The first half of the book largely talks about even in combat how reluctant people were to shoot other people. Even in Vietnam when some were confronted one on one with the enemy, by accounts from soldiers in the field, there was some mutual agreement not to shoot each other… if they were alone.

I thought it was a bit fascinating, because you hear about some of these ideas that some people never shot, and the calls of cowardice afterward (hell, read or watch The Red Badge of Courage to get more–the whole story is about that in essence). But most soldiers were able to disguise their inability to kill by firing over the enemy’s heads or mimicking the firing and recoil action. Plenty of them did that during the American Civil War, enough to tell scholars why the body count wasn’t much higher in all these actions where hundreds or thousands of men were firing within 100 yards of each other.

When we get beyond the chapters with the initial reluctance to kill and get into the conditioning methods, then it gets a bit uncomfortable, at least for me because of current events. After the conditioning and war comes the return to society (and if you were a protester of the Vietnam War, whether an in-your-face or silent version, be prepared for a lot of finger-pointing). With the combat and return to home elements is mentions of PTSD, especially with Vietnam, and the ritual of homecoming, a kind of winding down and calming period where the warrior comes back to integrate into society.

Frankly, I don’t get why the use of troops in Vietnam had to be so drastically different than in other wars, mainly in regards to tour length and training with their groups. Maybe it was the draft aspect, and the powers-that-be were gonna get even more protests by forcing young draftees to be there year after year for who knows how long. But there were draftees in all the wars, so why did they do year-long deployments for that one? Guess that’s a question I may get an answer for in another book, but that “only a year” thing really made things difficult for the men on the ground and the ones going home, as On Killing explains well.

This is the revised and expanded edition of the book (printed 2009), and there’s less than a dozen pages mentioning American law enforcement, as in 1 or 2 pages and a scattering of paragraphs (which is why I know some people wanted to read this book recently–I know I did). Considering how much “killology” has taken off as a training and educational aspect for law enforcement, I figured the seeds would be in this one somewhere, but there’s very little. Must be in another of his books or just in his seminars.

However, around 3/4 of the way through, there is some mention of law enforcement and what makes “warrior training” for cops so unnerving. Page 258 has the most cringe-worthy part, talking about desensitizing and conditioning officers on seeing suspects as targets if their lives are in danger. One career law enforcement officer with the Border Patrol called the process “manufactured contempt”. I won’t quote it here, I’d rather you read it with context from the rest of the chapter if you choose to.

Let’s just say I cringed pretty hard after reading it.

Well, the book has plenty in it, but quite a bit of it’s repetitive. Some quotes from soldiers are reflected on and re-printed in different sections, which might get confusing if you put it down because you might think “hey, didn’t I read this already?” and think you marked the wrong place where you left off. And then there’s the “discussed in _____ section,” that shows up a few times. It makes it repetitive feeling and just all-around off-putting. There’s also a section about violence in the media and kids (he has a whole other book on kids killing, so just a chapter in this one).

Some of this is good information to really think about. If you’re a history buff or read books about war a lot and soldier diaries, then a lot of what’s in it is gonna feel like “duh.” But there’s plenty more to learn about. It just means it’ll be a quicker read for you.

Worth a shot if you want, just don’t expect much on policing in this work, if that’s what you were trying to get the most of. Reluctance to kill, conditioning, de-conditioning… there’s plenty there.

3 thoughts on “On Killing: The Psychological Cost of Learning to Kill in War & Society, by Lr. Col. Dave Grossman”