Taking down statues of people in states of rebellion who were fighting for and openly supporting an immoral system is NOT erasing history: it’s history MAKING.

Actually, it’s also correcting the record. Those statues were an attempt to erase history already: the history of the gains made during the 1867-1877 Reconstruction era… gains allowed to slip away by white supremacists and wealthy landowners (mostly former slaveholders, naturally).

First, Regarding the “it’s art” argument, I understand that art is subjective, open to interpretation. However, the context is not. We’re so far removed from the time period many of those statues were put in (on the time-space continuum, not mentally, it seems).

Today, we see statues. Big chunks of granite, marble, bronze, or whatever that mimic other Western statues of statesmen or warriors. They stand tall, look imposing, and must be a bitch to clean bird shit off of once or twice a year.

We see dead guys with nice clothes and a stone stare, if we bother to look, with a name or description chiseled on the base or with a placard attached. They become part of the landscape for many, a landmark to meet up somewhere or an obstacle to use for cover in games of hide and seek.

We don’t seem terribly big on adding statues today unless there was a disaster. Living men and women being immortalized in stone or bronze? They’d have to be incredibly inspiring or great people today.

I’m sure some kids would ask their parents today about the statues in their parks and wonder who they were. We’re in the 21st century now. Even in the South, what does a hypothetical white parent say to a hypothetical white 7 or 8 year old about a statue of Jefferson Davis? That he was the president of the Southern States during the Civil War. Okay, why was there a war?

I’d love to be a fly on the statue’s base (taking a fly-sized shit on it for good measure) listening to the conversation.

Because honestly, I have no clue how the conversation would go. Would the parent go for the state’s rights argument, saying that Southerners wanted to do things their way and the rest of the country wouldn’t let them, so they made their own country? And if the child asks what the South wanted to do that everybody else didn’t want them to, what then?

No matter how you slice it, the reason for the Confederacy and the war eventually boiled down to slavery. It’s like a secluded, fancy gated community that has winding turns and goes out and in, but eventually ends up at the one gate to leave through. You can hem and haw, but there’s no answer that doesn’t ultimately end up at wanting to keep the system of slavery intact.

Thankfully I’ve never seen it, but I’d have to wonder at a parent that would beam up at a Confederate statue and explain the institution of slavery and the Lost Cause (I think I just threw up in my mouth writing that) to their 7 or 8 year old kid and not so much as twitch.

What would that child think? How would they respond, especially if they’ve been told every day in school that they need to share and be nice to other people?

There’s a reason that doesn’t happen, and why people like my dad seem to have saved up those negative racial thoughts for when I was older, or maybe similar parents would spend time on blog posts or message boards arguing that slavery was actually good for black people because they couldn’t handle freedom and were going crazy after the war.

The same old myths over and over again.

Beau had something to say about that regarding Juneteenth and post-slavery society (slightly out of date only because Dump changed the date of his Tulsa rally after all):

But let’s go back to that hypothetical family with hopefully saner parents. After the kids ask about why the South became a country, then will come the explanation of what slavery was (and hoping they’re being honest and not saying the blacks were “workers” like only an uncomfortable asshole would). And what’s the response of that 7 or 8 year old kid? Probably something along the lines of “Slavery is mean.” or “Slavery is stupid.”

I’ve learned in teaching that 7 or 8 year old kids keep their words brief and to the point when they hear something bad or mean.

If they’re really inquisitive (and a little repulsed), they’ll probably ask the question a lot of people have been asking in my lifetime (and even more now): “Why do they have statues then?”

Some people just want to see that they are statues, nothing more. Now that they’re being removed, a few whites are howling that history is being erased. These same statues that have become part of the landscape of parks like trees and paths and flowers. The same statues that any other time wouldn’t earn a second thought.

When those statues went up of Robert E. Lee, Jefferson Davis, and a myriad of other Confederate leaders or soldiers, people saw things very differently. Especially in the half-century AFTER the Civil War.

If art is about context, what’s the context about these statues and why they were set up? How many of those who want the statues to remain are asking that question?

All you have to do is dig up the speeches at the dedication ceremonies FOR these statues all over the South. White supremacy, the Lost Cause, segregation. And a lot of flowery language that sounds like it came straight out of Ashley’s mouth from the movie Gone With The Wind.

Better yet, the very beginning of the film (after the credits and just before we see Scarlet has a scrolling prologue that reads:

There was a land of Cavaliers and Cotton Fields called the Old South… Here in this pretty world Gallantry took its last bow… Here was the last ever to be seen of Knights and their Ladies Fair, of Master and of Slave… Look for it only in books, for it is no more than a dream remembered. A Civilization gone with the wind.

–Atributed to Ben Hecht (from goodreads.com)

The statue of “Silent Sam” at the University of North Carolina, dedicated in 1913. The speech was given by Julian Carr and is damned boring to read. He goes on and on about the ladies, the tears, the war’s glorious dead and the numbers.

So Carr breaks things up with a few poems. Some “justice of the cause”, states rights triumph, the Anglo-Saxon race… About two-thirds down Carr actually detours and waxes nostalgic about this:

I trust I may be pardoned for one allusion, howbeit it is rather personal. One hundred yards from where we stand, less than ninety days perhaps after my return from Appomattox, I horse-whipped a negro wench until her skirts hung in shreds, because upon the streets of this quiet village she had publicly insulted and maligned a Southern lady, and then rushed for protection to these University buildings where was stationed a garrison of 100 Federal soldiers. I performed the pleasing duty in the immediate presence of the entire garrison, and for thirty nights afterwards slept with a double-barrel shot gun under my head.

–from Julian Carr’s Speech at the Dedication of Silent Sam, June 2, 1913

Let’s just say if you keep reading further in the transcript, you’ll have some issues with some American leaders you might not have thought too much about before. Amazing how much is glossed over in education.

Tampa, Austin, Richmond, the list goes on and on about cities that have had dedications with a wink and a nod to white supremacy and segregation as law.

There was one monument in New Orleans, one of the first to come down several years ago, the Liberty Monument. All you have to do is look at the inscription and know why all the other statues of Beauregard, Davis, and Lee were put up in that park. It’s just an obelisk, but the inscription at the base read: 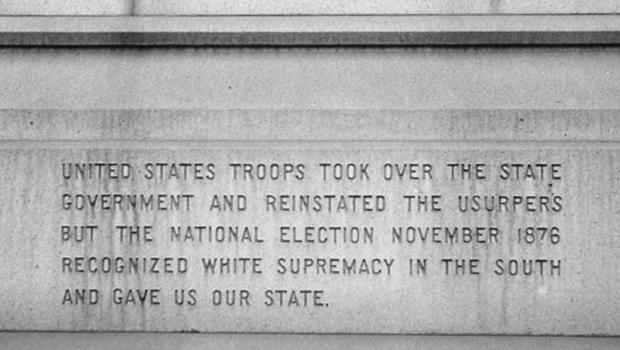 And so continued the process of glorifying myths. Why do these men still have to be glorified through statues?

So that those who would prefer not to be reminded are forced to see them, I guess? Good way to let the black people in those regions know that they’re still in the South and they’re not gonna be equal to whites, so don’t bother trying.

Stone or bronze, silent sentinels looming over everything.

And it worked pretty well for too damned long.

But I’d love to know something from those whites who insist these statues must not be destroyed or moved, who want the stars and bars flags at NASCAR events, who say we’re getting rid of Southern heritage by getting rid of these things.

And I’m not trying to be an asshole, I just genuinely don’t understand, so feel free to enlighten me, please.

I’d love to know, as a fellow southerner, what’s so worth remembering?

Why do you need a statue of Robert E. Lee up? What are you wanting to remember so badly? Why Jefferson Davis? What do you want to remember about him? Read his double-doorstops of nostalgic waxing on about the rise and fall of the Confederate government. It’s available at Barnes & Noble, both parts.

I guess reading over 1500 pages about the Glorious Cause (here comes the heartburn) inferiority of black people and righteousness of slavery and the gentleman landowner as an enlightened despot might turn your stomach after a while.

Yeah, it’s gonna be quite a while before I tackle it myself.

Seriously, what’s so worth remembering?

These statues need to come down because Reconstruction was a lie. It officially ended in 1877, but stopped too damned short of the goal because “we the people” are an impatient bunch and get tired of change too easily. That’s why all these reform eras stop short–we burn out. But we burn out when there’s still too much work left to do, and we pretend it’s enough.

We are not “reconstructed.” The process has been a slow crawl, but I firmly believe we are still in Reconstruction.

Too many supremacists are still fighting the fucking war in their heads, filled with the musings and beliefs of white ancestors. Nostalgic for an image where just by being born white, the law and institutions were “just” (because they were naturally on their side).

Take the statues down. Put them at the appropriate Civil War battlegrounds where the men fought if you’d prefer (which wouldn’t be a bad idea–might help people picture the site and the battle easier). Or put them in museums in the Civil War section behind glass (will be easier to keep the bird shit off, too).

Feel free to leave empty pedestals where they were, or put placards up to explain why they came down. Use this as an educational moment, like some other controversial sites.

As a white southerner, I say take the damned statues down. There are other ways to remember history. This way we can understand the wrongs, make peace with them, and improve. The statues are the propped up remnants of those who wanted Reconstruction to have never happened and did all they could to erase the gains made.

Let’s finish Reconstruction off right and remove this barrier to a better society.

3 thoughts on “Confederate Statues Have Got to Go. A White Southern Woman Weighs In…”