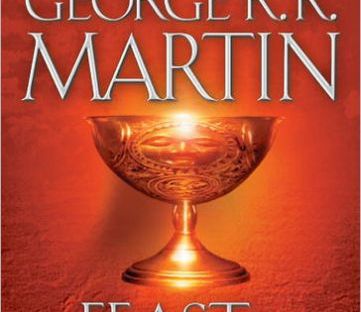 Well, this one seemed to have too much and too little in its pages, all at the same time. Many characters are missing, which is disappointing because I kept going further and further, wanting to know what happened to X, or Y, or Z. This is a book for more of the side-players, or what we’re thinking of as the side players and what’s happening in Kings Landing, where young King Tommen is with his wife Margaery Tyrell and Cersei as queen regent, ruling and trying to keep her power.

Religion has its place in the series, old gods and new, and the Lord of Light that’s made quite the impact in the past few books. But now is the surge of pious and devout that’s gone to Kings Landing, the Sparrows, and one among them that’s dubbed the High Sparrow eventually. We get plenty of how religion and the state intermingle as the pages go, some with very surprising results.

There’s a lot about Cersei in this book, and trying to rule on Tommen’s behalf for a few years, despite pressures from the men around her and the people she’s seen as allies. She has paranoia because of what Tyrion did in the last book. She’s convinced Tyrion killed Joffrey and believes he’ll seek her out and kill her when her guard’s down, or kill Tommen. She’s constantly sending out decrees and seeing people who may have information on Tyrion and Sansa, both on the run in their own ways. And then there’s Margaery and her family, surrounding Tommen and becoming an influence Cersei has to check so they don’t take over power.

When it’s not Kings Landing politics, there’s a lot of wandering. Riverrun is still holding out, the Vale is isolated with winter approaching (and sickly Robert that all have to cater to). Regarding the remaining Starks, Sansa and Arya have most of the time, both ending up in interesting situations, learning more about what they are capable of and ways to stay alive. Arya’s having some trouble navigating her world, and it is really taking time. I’m curious about these people she’s fallen in with and how her bravery has just kept her going. Sansa is trying to live in her new identity as best she can while being mindful of those around her, especially sickly, spoiled Robert/Robin, who she has to placate as much as she’d like to hit him (and so would I, for that matter).

Many characters are missing in this book, and I won’t disappoint you by saying who. What’s in place is lots and lots of journeying. Brienne is keeping her oath to Jamie to find Sansa and ensure her a safe place (and find Arya, if she can). She finds others who are on the search for Sansa as well and falls into difficult and uneasy alliances at times, which leads to some moments of meted-out justice and other more shocking moments. Jamie leaves Kings Landing to help take Riverrun for the crown and negotiate terms. Then there’s Sam, who Jon commanded to take Maester Aemon to the Citadel and get trained as a maester himself for service on the Wall, with the wildling girl, Gilly, and her child.

We definitely learn more about the Greyjoy clan as well, the power structure and an election for the new king of their line. The few contenders for the honor all have different reasons for seeking that post, and different qualifications.

And then there’s the Dornish people, many of whom want vengeance after the Mountain killed their favorite prince, Oberyn Martell. It’s up to his brother, Doran, to keep the peace, even if it means isolating family. The secrets kept by these two clans, the Greyjoys and the Martels are carefully teased out by the end of the book… and they relate to the Targaryens of old, and Danerys today.

This is a complex book with some interesting twists and turns. Some of the character development is quite fascinating to read. It’s interesting to see Cersei having to realize that as a woman, she will constantly have men counseling her on leadership and doubting it. It’s funny to read her frustration with her in-laws, especially Margaery, who everyone refers to as the queen (though Cersei–every time– bites her tongue before she wants to say “I am the Queen!”) Admittedly, there are times I wanted to slap Margaery, too, in their scenes together. Part of me wonders Margaery is just a mini-Cersei, and Cersei having to deal with her entitlement is karma (Cersei remembering her meeting with a fortune-teller sure makes it seem that way).

And then Jamie’s development as a person apart from Cersei gives me hope for him to be a better man. When his aunt Gemma speaks with him in one scene about his father’s death, I admit I was a bit puzzled, but also had to raise my fist in a Yes! when she said that Tyrion WAS Tywin’s son, as in the most like him of all, but it was Tywin’s imposed blindness that prevented him from seeing it.

Nice to know SOMEBODY in the family can acknowledge it!

If you really like these characters, definitely give this book a whirl. You won’t find all your fave characters, and might find some new ones to despise, but there’s so much to them that it’s worth reading. It’s gonna feel like a slog in some places just because of the detail and the journeying (and the many many side characters), but there’s enough mystery to definitely make you want to find out more.

And on to A Dance With Dragons… eventually.