I wasn’t feeling very good today, just general tiredness from the storm the night before waking me up several times. I finished most of my notebook regarding plants I’m working with and any specs and instructions I can find on them, and then went to check on what I already had planted versus what was still in my seed greenhouses.

I moved away from those plastic seed starter trays (except for the base, which is for water-retention and reusable as all hell, and the clear cover). Every time I tried to use them, I’d either end up with a soggy mess of mud and unprotected roots when I tried to pull the seedlings out, or I’d have to cut the bottom out to protect the roots and therefore ruin the tray.

Instead, I use those peat cups that you can tear away or cut out and plant in the ground with the seedlings. I liked that idea because it also made organizing better. But for a while there, I had trouble getting my hands on some because thanks to this virus thing, a bunch of other people had the same ideas as I did. And I did something stupid, because I needed more trays for all the stuff I needed to plant.

I got a lookalike system from the local dollar store. I didn’t realize how different it was gonna be til I got home and compared it to the peat cups I already had.

The really cheap ones are heavier and firmer. I just figured I had to maybe make the drainholes a bit more obvious on the bottom and that was that. On closer inspection, though, the material was quite different. I don’t know exactly what it was, maybe recycled cardboard or something, but it was very similar to those non-styrofoam egg cartons.

And so, because I needed to start some seeds right away, I figured “beggars can’t be choosers” and started seeding with those things.

That was almost three weeks ago that i did that. I took a closer look today and realized that of all those cheap trays, maybe only two cups sprouted something. The rest of what was there was slightly warped with very diminished seed starter levels. What grossed me out was when I tried to remove them from the tray. Good luck getting the few seedlings to plant out of them–the water they’d been in had apparently reduced them to heavy wet paper because as soon as I tried to pull out the line of 10 cups, it practically disintegrated in my hands in a slimy, pulpy mess with seed dirt in my hands.

Yeah, definitely got what I paid for there. Spent most of the day re-seeding cups (and still didn’t finish, but I’m almost out of cups and certain seeds and I’m NOT making the same mistake twice).

The peat pot directions said you had to wet it all thoroughly (or at least have enough water in the main tray to be soaked up by the peat pots to keep the dirt and seeds moist). 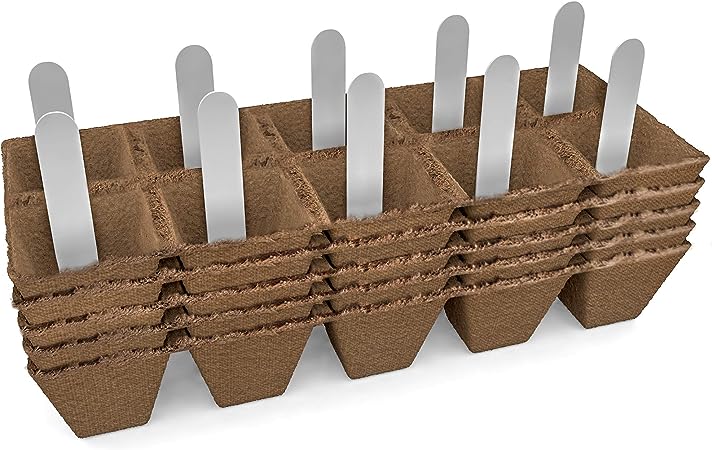 Whatever that cheap crap was, though, just wicked up some of the water throughout, but otherwise sat in it and turned a bit slimy. It’s like a tray full of that material prevented the water from really being used as it was intended. Guess it was too dense a material to really do the job well. With the peat cups, I might have to add a bit of water in the tray because of evaporation, but I could tell the soil was getting the most of it through the bottom. Unless I was being careless, I haven’t had a peat pot just rip apart in my hands from being wet.

I also make sure to drain what I can out of the tray unless it means I’m going to spill everything out.

So, if we combine “you get what you pay for” with this situation, we also get “be patient.”

I’ll add “be generous” to that, now that I’ve got better materials to play with (and will stick to them–lesson learned).

I’ve tried to ration my seeds a bit as I’ve planted. I know you need more than one for germination, but unless I’ve been told something specific on a package or one of my books, I’ve kept to 2 or 3 seeds in the peat cups to grow into a plant.

I’ve decided I’d better start being generous before I waste more time. Some of the peat cups had nothing growing out of them, even over a week after sprouts (or a sign of them) was due. I figured I had some defective or dead seeds in the mix and if I wanted these things to become an edible garden, I’d better get a bit more generous in seed allotments to ensure something would grow.

So, today I did that. Instead of 2 seeds for things like peppers, I put at least 4 and maybe 6 (especially if I was almost out already, anyway). I was a bit miffed that I had 7 types of peppers I was starting from seed and not a single one sprouted. I figured “be generous and put more seeds in,” so I did.

I hope it works out, but at least most of the varieties I planted are the same ones I can find just about anywhere, so I’m not that crazy worried. They were bought before I discovered my fave organic seed site, and they’re organic, too, so no biggie.

I’ve learned some lessons today that’ll help me proceed in the future, I think. Hope today’s planting becomes worth it in the next month and change. Would be awesome to have a bunch of herbs and pepper plants springing up around the same time out there. Mmm…

Patience is not just a virtue, but a lifesaver (or at least a moneysaver these days. Just gotta reel myself in once in a while when I think I absolutely have to do something RIGHT NOW… but if I think about it, it really could wait after all.