I try to be a creative person as much as I can. But I have a few things that tend to get in the way of that, namely that I’m an over-analyzer with impulsive tendencies.

I realized while writing this that it doesn’t make much sense. You’re generally either one or the other.

Well, I’m kinda both. I’m easily distracted by the next thing I want to try versus what needs to be done (the mound of unfolded towels that have been sitting on the back of my couch for a week is testament to that.)

Sometimes I have great ideas, or at least they seem to be at the time. So, I impulsively decide to give them a shot. And then I get out my graph paper, pencils, jump on the internet, get every book I can think about that might help me (and leave the stacks around all over if I’m not careful).

You get the picture.

I have an impulsive idea, and want to run with it. But if I’m not careful, there’s one of two things that may happen.

In the past weeks, especially with this gardening thing that’s rapidly taking over all my non-work time (starting a lot of stuff from scratch is like a crash-course in crazy), I’ve learned that sometimes you have to just stop, make a note where you left off, and sleep on it.

I think I’ve saved a bit of frustration and money by doing that.

The biggest crazy idea I’d had was in planning one of my garden beds. I finally buckled down and really planned it out, and even have space for extras just in case I found another thing I wanted to plant. But I was really thinking about trellises and the space I have. My garden is strange in that my beds are long and at most 2 feet, 8 inches wide. A bit wider than recommended, generally, but I can sit on the bed walls (or get on a ladder once things REALLY get growing) and still get to what I need.

All the herbs on the left are gonna be in 12″ containers. The top bed uses A-frames. Beans are on pole trellises on the right. The melons and squash hovering in the top and bottom are on blue free-standing trellises.

However, I’m gonna need trellises, and that was the hard part. In using some of my books to research space-saving methods, I found quite a few unusual ideas on trellising even heavy stuff while growing other plants (ones that need less full sun, especially) underneath the trellis area. But trellises get expensive if you buy ’em, and I couldn’t find any that were exactly what I was looking for.

So, I slept on it. And considered that plenty of chicken wire might be just what I needed.

I figured I’d build frames 6 x 2’4″ (give or take) and then staple the wire to the frame. I got furrier boards, 1 x 2 x 8, and could cut them down to the right length. I figured the wire and the frame would hold it all together–if one part was weakening, the other would strengthen. To make the A-frame, I’d planned to take these long pieces and attach them to each other at the top with hinges.

As I started working, I discovered the trouble was two things (why is it always two things? Anyway–):

It took me a day or two to get over that. Back to shopping for trellises or design ideas.

I had other ideas for trellises, in that I was gonna use that chicken wire and make an arch trellis to go between garden beds (my area has beds in a U-shape, with two feet between the ends). This would let me plant a few more things up a trellis without taking over most of a bed for the structures. Also, I’m putting my tomatoes in planters with the tomato cages instead of in the beds themselves so I could haul them off to the greenhouse in late fall without destroying the roots. The planters would go in that in-between space of the trellis legs.

Well, I worked on the idea for a couple of days, and realized that the higher the vines got, the heavier the fruit, and the whole thing would collapse, even with wood to brace it. I ended up getting 4 of the 6 foot free-standing trellises that I could bury in the holes of the bottom cinder blocks for stability. This Saturday I got the last two and painted them all weekend (partly the color, mostly the splinters and burrs every time I tried to handle them. Me and the tweezers got friendly. No way was I gonna wrangle with that every day, so I got some light blue paint and went to town.

Might look a bit sketchy, but if it’s gonna (ideally) be covered in vines and fruit in a few months, who the hell cares?

So, chicken wire was out. But then again, I still have plenty of welded fencing wire to play with. I cut out just enough of that to bend around the frames and staple it in the back and the front for extra sturdiness (after spray painting the wood to protect it and give it a bit of color).

And this morning, I tried it out. Bending the wire when there wasn’t much to spare was tricky as hell (my fingers are gonna be sore tomorrow), but hey, hammers are really helpful in bending them down the rest of the way. And once I stapled and hammered to really make sure they were in, in some places the wood was soft enough that the wire was basically driven into the frame. Some of it doesn’t look pretty, but hell, they just have to function. I’ve got a gap because I forgot the fencing was 5′ long and the frame was 6′ (I thought it was 4′ fencing and I’d cut out 2′ sections to fill in the rest… but I figured I’d leave that part alone so I have room to maneuver and check the vines at ground level before I train them upward).

Happy accidents indeed. Most trellises have much bigger holes than I have to thread plants through, so I’m compensating a bit for that.

I need three of these A-frames, and have two built. I’ll be working on another one this week. My main concern was burying the uncovered edge in the ground at least an inch or two for stability.

I still don’t have hinges, but I realized this morning as I was taking my time waking up that i have tons of that garden wire on a spindle (kinda like trashbag ties, but covered in plastic instead of paper). So I cut some long pieces out, lay two frames on top of each other, and wrapped the ties 2 or 3 times around in 3 different places to make a tied support that I could adjust. I didn’t tie them super tight because I needed the panels to spread and make an A shape, which would’ve been hard to do if I’d made them super-snug. Gravity alone won’t work well to keep the tops braced against each other (not the way we’ve been having random windy days around here). So, I figured I’ve got something with some give to it that will stay in place.

I just didn’t realize how much space I have under there right now. I have the base spread of about 3 feet. Of course, the fruit that the vines will drop will come mostly on the other side, so it’s not all for another plant. But if I have some root veggies or short bushes (argula, radishes, spinach, whatever), then they’ll be under there just fine with room to grow upward.

I’m doing a modified “square-foot gardening” technique, in that most things are in a grid like square feet, but it’s more accurate to say that it’x 1 x 1’4″. I’m keeping to a foot square, but because my bed has an extra eight inches on one side, if one plant gets a little bigger and expands into that middle space, it won’t hurt anything.

After all, this is only a second try, first real attempt with a permanent structure.

It’s gonna be crazy, and fun. 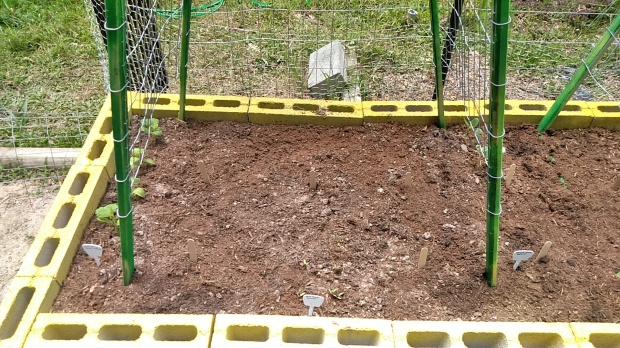 Three feet of base to play with. The Popsicle sticks are like my grid markers here, indicating a square foot. I’ve already got some teeny tiny swiss chard sprouts in the spot. Haven’t figured out what to put in the back yet.

Politics, things that make you think, and recreational breaks

Advice and Tips on How to Garden

A place to share stories, find solutions, and discuss ideas for a better future.

A site to discuss better education for all