I was drinking coffee on my porch a few days ago, enjoying the morning weather when I was hit by something. My old house used to be a lot longer than the one I have now, and there was a carport attached for my grandma’s car (she moved out over 20 years ago). Eventually, my dad got some hot asphalt from these guys with the works crew that didn’t need it and filled it in. It made kind of a covered “patio” for several years, a good place to kick back in a chair or just hang out and enjoy the breeze while watching the hummingbirds.

That carport is at my neighbor’s house right now, about to be put up. I gave it to them when I had to sell the other place and I couldn’t have it still attached. People couldn’t believe I did that, but frankly, time was of the essence and what the hell was I gonna do with a lean-to carport? Let it rust? No, so I gave it to my neighbors who dismantled it while their kids helped me pack up the kitchen in that time (I was trying to do it by myself and the house movers were getting impatient, understandably so).

They’re awesome neighbors and we help each other out a lot.

So, my house is about 10 feet from that asphalt now, and all I had on it was some gardening stuff and buckets I was trying to do stuff with. It was part overgrown with weeds and needed cleaning. But that morning with the coffee, it hit me: I had a level surface with decent drainage and (mostly) intact. So, I had a place that made sense to put my elevated bed garden and close it off with a fence and gate.

I already had tons of materials for what I needed to do: I bought the fence posts last year, the wire to run around it, all that stuff. I had cinder blocks (used and new) for the beds themselves and a bunch of lighter half-width blocks, too.

It was a great idea. I was so pleased that I’d have a great place for it and could block it off.

But then, I ran into a few snags.

My dad’s measurements were a bit off, so I tried to compensate a bit. I’ve got a 12 x 24 foot space to play with, but somehow the opening to the driveway ended up a foot wider after dad put landscaping timbers down.

That’s how he held the gravel and then the asphalt in place, but over time the ones that were facing the elements had rotted and fallen apart. I’m guessing the warping wood and deterioration of the beams allowed the asphalt to spill over and spread, or push the timbers out a bit. So, I had to guesstimate. It took lots of remeasuring, but I’ve got it (so far) where it’s not totally askew. Might be about four inches off, but I’m not gonna lose sleep over it. It’s also hard to tell because I have a free-standing carport that is at a slight angle because of the driveway. We have a U-shaped driveway and this little dogleg is kinda weird, but because of the trees, we couldn’t do it any other way. So, the fact that the carport sits at an angle to the house a bit might make it seem worse than it is. I can live with that, though. 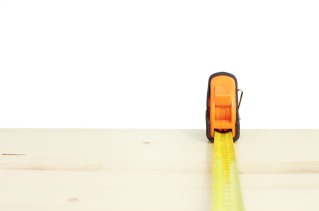 It’s been pretty hot in the middle of the day, so I’ve been working a few hours in the morning and then a few in the evening, taking time to read and watch YouTube gardening videos. I calculated the number of half-blocks and cinder blocks I’d need to do what I planned to do, and went to the store to pick up my order yesterday. Well, the videos explained some of the rules of elevated beds and how compaction (especially with compost mixes) will happen over time and you’ll have to add some in… and the roots need ample room to move.

I realized the amount of space I’d have on the asphalt between the top of the cinder blocks to the base was not NEARLY enough. I was gonna have to double the height (at least) of the beds I was making.

I figured that one out today, so of course I’m trying to re-calculate how many more bricks I’m gonna need so I can place an order for more… but I’ve gotta play with how they stack up. I’m glad I figured out that I should have regular sized cinder blocks if I was gonna have to stack concrete, because trying to stack those half-sized ones didn’t feel stable enough to me. However, I’m easily gonna have to get a lot more than I’d originally planned. That’ll be fun to get–my fingers are definitely abraded from rubbing against that concrete while picking the blocks up (fire ant bites were irritating my fingers, hence no gloves).

On the flip side, my calluses are coming back so guitar practice will be FAR easier to deal with.

So, there’s another shopping trip in the future (ugh). But what really struck me was the little gate I wanted to install.

I found one of those “no dig” varieties that I could easily latch and had bars all the way down to the ground (no decorative holes for rabbits to squeeze through… squirrels will be a different story). I was planning on putting it at the driveway end of the asphalt, putting the post markers there and I started beating up the asphalt a little so I could get the sharpened stake and pound it down easier (it’s no-dig in the sense of no post hole diggers or shovels needed, really)

Only, as I cleared away some of the asphalt I remembered something. Before dad covered it over, the ground underneath wasn’t sandy, it was a gravel layer with natural concrete underneath that.

Yeah, no post-digging on THAT spot.

That kinda annoyed me, because I couldn’t put the fence stakes through that kind of surface either (and I tried for a few minutes).

And yet, an opportunity presented itself.

I had the posts all around already (except for that long stretch where I can’t dig), and figured that the back corner closest to the house would be the perfect place to put that gate. For one, it’s the closest section to the water faucet and my kitchen steps. So, when it comes to taking care of the garden, I’ve got all the tools close by with minimal walking.

Naturally, being almost summer, it’s nice and dry, but I’m going to make a path eventually. First thing’s first: get the beds built, then the fence, then we’ll go from there. I have so many insane projects right now in my head it’s not even funny. I’m amazed I’m not a totally sore wreck right now, though.

So now, my cute little gate is up and latched and ready to be part of the bigger fence system. That fence will be the last thing because all the concrete will have to come through the area that I can’t dig in right now and I’m not hauling all those bricks around to a side entrance.

So, some good came of it. And I got to see how this system will be better.

So this morning I was surprised to find the stimulus money actually came into my account a few days ago. I never would’ve thought they had my info since I always had to pay them, but maybe their memory is longer than I thought.

I paid some bills off (they all are due within 10 days of each other, so it took an hour to go through all those envelopes and missed junk mail). I sent off more than I’d sent off in a long time because I found lots of charity donation solicitations going on.

And I decided to give that damned stimulus check away. I promised myself if I could handle it, I would, especially after seeing how bad the Houston Food Bank and other secular charitable institutions have had it lately (especially the food bank after that ammonia leak in the warehouse destroyed a lot of their supplies a few months ago).

I wasn’t sure whether I should basically send money, or use the money to really start my garden and THEN when I had crops in, make sure to donate some of the veggies and other fresh foods. I know they take fresh stuff, often from local farmers, but I wondered if maybe they could take some from smaller growers like me, should I get good enough at it.

But after seeing the news and the lines at the food banks, and how they’re supplies were dwindling, I said “Screw it” and sent them a chunk of that check. How come food banks weren’t brought up as recipients of the bailout? I at least didn’t see any mention of them getting assistance to help communities (and they’re a great resource).

I don’t know, but I felt they needed it more than me.

Besides, other than some more cinder blocks to finish the build, I’ve pretty much got all I need–including seeds.

I felt pretty good about sending those envelopes out, even the bills (guess that was some good coffee–I freaking hate paying bills). If dad was alive, he probably would’ve blown his top, but I don’t care. I figured I hadn’t spent any money in weeks so I could afford it for a while.

I spent most of the day working on the beds when my neighbor came over and asked if I was still interested in selling my travel trailer. I’d mentioned it a few times a few months ago, and then earlier in the day I said I planned to put a “for sale” sign in front of it to generate interest (tired of weed-eating around the thing). I never used the trailer–was for dad’s toys–and it was just gonna sit there and gather rust, so I quoted a price and now it’s hers.

So, got some “rainy day” money after all. Glad I won’t have to use the credit card on the rest of those blocks (hee hee).

All in all, a very weird day, and a very long one. I almost can’t wait for tomorrow… just hope I’m not sore as hell (my feet are throbbing, but then again, I’ve gotten used to being without sneakers or boots on, dang it). It’s nice to finally get a bunch of sunshine, exercise, and an excuse to down a gallon of iced tea. That and the breeze really made the day awesome.

I just hope I get REALLY good at gardening to make all this worth it in the end. Time to read some more on it and take some notes before bed.

One thought on “Bright Ideas, Happy Accidents, Giving it all away & Making a sale. Or, one damned busy Friday I didn’t expect…”