A comment from someone that I read today prompted this question. I get the need for ventilators for all the people who are coming down with the worst bits of this coronavirus. Obviously, there’s a need.

However, the longer this goes on, the more it feels like it’s just tackling a small part of the problem. Daily we’re hearing and seeing news reports about hospital staff not having the protective gear they require to do their jobs, of civilians outside the hospitals not having recommended protective gear either.

Obviously, I’m rooting for the hospitals to get the most of it, all they possibly can.

So, yes, we’re hearing about these shortages. And yet, who is making these items (or not making them)? We’ve heard for weeks about GM being given money to retool and make ventilators (and workers who want to make them–good for them).

Ventilators are important, true. But is there any supplemental emergency fund to make more medical gloves?

I haven’t seen a thing about any of those items getting pumped out at furious pace, subsidized or no. And that worries me, because the longer this goes on, and the less these items are available for hospital workers especially (and the public that will use them), ventilators will be about as useful as slapping a band-aid on a buckshot wound in the end.

If we curb the means by which people can get ill, and get enough gloves and PPE of all types to those front-line workers that need them so damned badly, that will help flatten that curve everybody keeps talking about. We can talk about ventilators all we want, but I hope like hell we’re focusing big time on producing the items that would most help reduce the need for ventilators in the first place.

I know quite a bit of PPE were shipped out to China and other countries in February (thank you Beau of the Fifth Column for letting us know weeks ago). But now it’s mid April…what’s going on as far as more equipment coming down the pipeline?

We have too many hospital workers getting sick, and we’re needing them to do the job. But we can’t seem to give them the proper tools they require to do the job, either. I guess it shocks the hell out of me how unprepared for a crazy medical emergency we’ve been in this country. Granted, when you’re comparing things to 1918 and calling it a different time and different knowledge base, well, okay.

But honestly, there’s two things we have to be realistic about and our leaders haven’t been. For one thing, globalization. We can stop some stuff getting in, but we’re the most well-traveled humans in history right now, so guess what–viruses and other shit are gonna go along for the ride, too. That’s a no-brainer, but it hasn’t hit the leadership that where people go, viruses will too, and they don’t give a damn about borders or wealth or even the seasons sometimes (can we chalk that one up to basic biology, evolution, and climate change…. Pretty pretty please?)

Another that baffles me is the pop-culture loving public (and so-called leadership that tends to be allergic to books, but will watch movies and TV all the time), is the lack of imagination regarding this scenario. I mean, I remember watching Outbreak in school every year I had a Health class (not always a reason for it, but it was school approved). All these dystopian films and shows that have come out, about humans going extinct (or mutated) through viruses and whatnot: The Andromeda Strain, The Walking Dead, Contagion, The Stand, 12 Monkeys, The Strain, etc.

Though many choices you can look up (if you’re feeling bored or morbid enough, or both… not judging) on IMDB.com have the event already happening, SOME of those nuggets of pop culture do show moments of hospitals being overrun, all the equipment being used to try and keep people alive and figure out what’s doing all this damage.

I’m about a quarter of a way through a book about the 1918 pandemic, and it’s amazing some of the parallels I’m seeing so far in the early information gathering, namely that for the sake of morale and not spreading fear, people ignored or sat on information for the “sake of the bigger picture.” 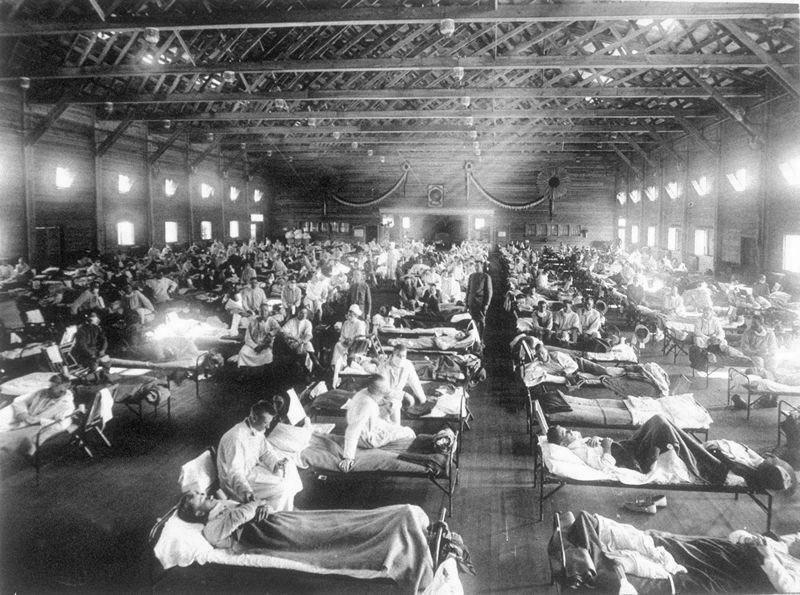 from wikipedia.org. Seriously, this is why docs and nurses need PPE, dammit!

Yeah, it was a war then, it’s an economy (some would argue “also a war”) today.

So, what are the companies out there making gloves, face masks, PPEs, all the things hospitals need right now? What have they been doing all along? What’s their progress?

And how are things going to change as far as preparedness goes when all this is over?

And how long will that take, for this to be over and hospitals and pharmacies and other medical/healthcare facilities to be able to use and stockpile these necessities again?

I’m getting worried, because this scenario doesn’t just sound a lot like some kind of weird rhyme of the 1918 pandemic. Rather, with the loss of nurses and doctors and the like to this illness while trying to fight it (through death or self-quarantine), leaving others to continue on with the job, it reminds me of stories I’d read about the Black Death. In this case, it wasn’t physicians or scientists, but the local priests trying to be there for the dying, until at last they began to die off as well.

Where is the protection our healthcare workers need? Not just them, but anybody in a hospital that must be there to keep the place running, or the nursing homes, or the emergency clinics, or pharmacies for crying out loud? I’ve talked to a few pharmacists that are really having to keep track of what PPE they have when dealing with customers coming from their meds, sanitizing what’s been touched by everyone, and of course making sure not to cross-contaminate.

I remember my days working in a pharmacy–there’s PLENTY that gets touched behind the counter and in front of it on a minute-to-minute basis.

Tough also for the pharmacists that work in the hospitals that don’t usually deal directly with patients, but have to dispense meds and IV drips and such to the nurses when they ask for them… a lot of interaction there.

Hoping for the best, and that they’re shipping out tons and tons of PPE to these workers, because dammit, this must NEVER happen again.

Anybody heard or seen anything about this in the U.S.? I’m kind of overwhelmed with trying to research all I can, but know I have to be overlooking quite a bit.