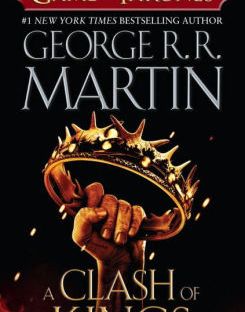 I gotta admit, this one took a month or better to get through because so much and so little seemed to be going on all through it. But I have a feeling getting through this hurdle will mean the next installation will just take off running.

A Clash of Kings has all the events that began in A Game of Thrones exploding into civil war. Stannis Baratheon, elder brother of the late king Robert, demands the throne for himself, insisting the boy king, Joffrey, cannot be king by right of blood because he is not Robert’s child, but rather the product of Queen Cersei Lannister’s incestuous relationship with her twin brother, Jaime. It’s true, though the Lannisters deny it as Stannis unleashes this information as fast as he can to the rest of the realm. Rumor and suspicion begin to rule the game from here on.

However, Robb Stark of Winterfell, the oldest of the Stark children, has been crowned king of the North by supporters. Renly is the youngest Baratheon and crowned himself king because Stannis is too stern and disliked to possibly rule, creating more avenues of chaos. And all the while Danerys is following the blood red comet that appeared when her dragons were born, trying to get her small band of people some needed shelter and supplies, and enough money to get ships and an army to take her father’s stolen throne back.

The book sets up even more characters to deal with and ever-shifting alliances. All the Stark children, separated for the most part, are all having to grow up very quickly. Jon, the bastard son, is on the Wall in the North, on patrol for most of the book, trying to ascertain what’s happened to the wildling settlements as winter approaches and the supposed “king north of the wall” swings down to march against the Wall. Sansa slowly learns about the world around her at court and how it differs from all the pretty songs and poems about ladies and knights she’d grown up with, and how she must move within it now that she’s a hostage of the Lannisters. Arya has changed many names in the course of this story in order to keep herself alive, even as she’s in the heart of enemy territory and managed to ally herself with dangerous, if somewhat noble, figures. Bran (the broken) and Rickon (who is going to turn into a very annoying brat, I imagine) are at Winterfell as Robb is on campaign and they are betrayed by Theon Greyjoy, who was sent by Robb to go back to his home to get his father’s army to go with him. But Theon has resented his time as a ward (or glorified hostage) with the Starks and instead decides to take Winterfell for himself after helping his family get up for war against everyone else.

This is a twisting, weaving narrative that gets almost boring at times just because there’s so much to take in. I know that sounds weird, but it feels like there was so much setup, like a game of chess that’s stretched out over weeks, only for one player to finally start really attacking the other’s pieces. If you’re not reading carefully, you might forget who does some action or is supposed to. I had to do some backtracking and re-read a few pages to refamiliarize myself when I missed a day of reading–there was so much!

I was hoping to see more of Robb in this book and what was going on. All that we know about him is what’s going on with others, the accounts of victories and the like, and Catelyn’s worry over Robb as she tends to her father and tries to negotiate with Renly in part of the story.

There are some characters that get some introduction here, or at least an expansion after being mentioned briefly in the first book. Brienne of Tarth, a female knight who is very awkward regarding female mannerisms and fashions, makes her appearance when Catelyn goes to see Renly. Then there’s Ser Davos Seaworth, a former smuggler who became devoted to Stannis (but is very afraid of the red witch, Melisandre, who he sees do some shocking magic as a champion of the Lord of Light–whatever that is).

Old and new ways are clashing as old and new alliances are. It’s interesting to see the mix of politics and religions, especially in Stannis’ case, and to read about the siege of King’s Landing and the battle, with Tyrion having to lead it when no one else will. And what a job he does–makes for exciting reading.

I gotta say, A Clash of Kings really made me want to learn more about many of the characters and what they were really like inside, like other than how they projected themselves. I really wanted to see if Cersei ever noticed how much Joffrey was a monster, like Tyrion, Sansa, and so many others have discovered.

There’s a moment I really liked with Cersei in it: as the siege begins, Cersei’s talking to Sansa, but it feels a bit more like she’s getting something off her chest and Sansa happens to be the captive audience. Part of me wonders if she was spoon fed the same romantic notions of lords, knights, and ladies that Sansa’s been carrying this whole time. I think she was, and it’s why she thinks Sansa’s so stupid, and Cersei resents that innocence. I think it gives her a moment of humanity when she’s otherwise been nothing but a heartless bitch to everyone but Joffrey.

I can’t wait to see what happens next with these characters, and how the heck things will work out. No, I haven’t seen the TV series, though I’ve heard a little what goes on. I’m interested how the events lead to those most infamous points in the next book, though. So, onward!