I’ve been out of it all week. Work, sleep, work, clean, sleep, work, sleep… and all along, eating the worst things each day. I had a few good days, but they taught me a few things I should’ve figured out from all the other times I’ve tried and failed to get off the fast food and junk kick.

My steps toward improvement have shrunk considerably to teeny tiny baby steps that should’ve come to me sooner before I fell into the big old hole.

I was trying to wake up after sleeping too much this morning when it really hit me what I’d been messing up on.

All week I’d been lethargic and eating too much or not enough in shifts, all because I was trying to make too many changes at once. I mean, I NEED to eat healthier to get my vitamins and minerals and lower fat and calories and carbs and whatnot. That’s a given. But going cold-turkey never works for me, and rarely for anyone else…at least, not long-term.

I’d done well stocking the work fridge with healthy(ish) snacks and salads in case I had to work a little later or didn’t have time to make anything. I’d eaten some of them, too, but that’s where the problem went.

Now I have to admit, I actually do like most salads, the pre-packaged ones in the bowls that the local grocery store has for sale for a decent price. The trouble is, if that’s all I have, I’m hungry two hours later, and getting REALLY cranky. So, I was glad to find I’d misplaced a snack in the fridge later: a package of apple slices, cheese cubes, pretzels and caramel.

And that hit the spot… but then came the evening, and I completely overdid it on the drive thru. That’s what the other stuff was supposed to stave off, dammit!

I don’t know what it is about food addiction and habits, because even when I’m not THAT hungry, or can’t really eat as much as I used to, I still order the same amount of crap I used to order when cravings were out of control. And then I feel like I must eat it all because I bought it.

So, the 3 big things I learned this past week are these:

Breakfast is something I’ve always looked forward to most when working in the mornings. The egg and bacon or sausage sandwiches and orange juice and hash browns just make me smile thinking about them. The trouble is, I’ve gotten an extra sandwich each day for the past three months because I’ve been so uncertain about my days at work (and no doubt gained a good 10-15 extra pounds from all that stupidity). Why? Because I tend to make coffee when I get to work and that’ll keep me going until I leave, or get lunch break, or whatever.

I guess I got used to not really having much of a lunch break, or not wanting to take one. But I had to remind myself that it’s not healthy or smart to front-load your day with calories and fat the way I have been, and eating the second sandwich even when I feel I’m already getting full, just because reheating it never tastes as good.

I have to remind myself that I CAN take short breaks to go to the staff fridge and get something if I need it, something simple like a salad or one of my cold snacks. I don’t have to wolf down the food like I’ll never get another bite again.

For some reason I’m afraid of being hungry at work, and it just doesn’t make much sense.

As far as #2 and #3 goes, yeah… I’ve lost count how many dollars worth of veggies and fruits and whatnot that I’ve thrown away the past few months. I have plans to make great food with my cookbooks, but then what happens? I get called in to work, am too tired to cook anything, and eat junk while the good fresh food rots.

Wash, rinse, repeat and you have the past several months.

It hit me this weekend that as much as I want to get off the fast food and the junk food, I need to work with what I can that’s easy to do, even if it doesn’t feel nearly as healthy as the recipes I really want to do.

I bought a frozen entree of chicken spaghetti last weekend and finally cooked it today (was pretty good). I must get my good nutrients in every way I can, away from fast food. And if that means relying on “throw it in the oven” meals for a while, then I’ll just have to do that.

It’s not a step I’m happy to take because of all the plastic and waste and all, but I actually feel better after heating up some frozen veggies to go with it. The rest I packed in a bisected microwaveable dish to take with me to work tomorrow night, with some frozen veggies and butter in the side-dish sections.

And I HAVE to take that kind of dish to work to heat up–I don’t have a microwave at home (hee hee).

Oh, wait–but how am I gonna ensure I STILL don’t end up going through the drive thru because I’m hungry after the night shift? I’ll need to set my alarm on my phone to remind me, at least an hour before closing, to go heat up my dinner and eat while I’m wrapping up paperwork and before I start cleaning.

Gah! Why the hell didn’t I think of this before?

I need to get some more of those multi-serving entrees if the price is right, just to change things up. As much as I’d rather be getting out the cookbook and really going to town on making good food again, I’m just not there yet physically. I tire too easily and it’s slow going getting my energy back. It makes me tired just thinking about being over the stove, ensuring things don’t boil over on me or burn.

The whole point is to train my taste buds to want something tasty and healthy, far away from the fast-food crap I’ve been gorging on the past decade. This is a step to eating healthier and waking up my palate to want new, more complex things (and making it consistent) without falling back on fried and salty-as-hell junk.

When I think about the amount I spend on one trip to Popeyes, McDonalds, Jack in the Box, or any of those fast-food places, I just cringe. Family-size entrees might be a bit pricey just looking at them, but that one “family size” item will still cost less than what I’ve spent on one fast-food meal, and will be fodder for at least two meals besides. That’s already something worth celebrating, a food bill cut in half for the month. That’ll make my wallet happy. 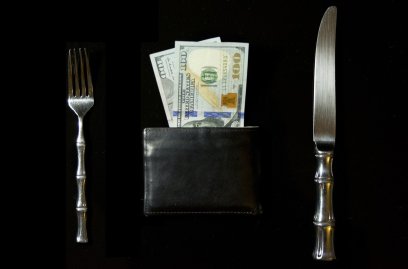 And I’m going for quality more than price. The last thing I need to do is focus solely on cheap crap, because then I’m right back in the bad habits I’ve had all these years, habits of eating fried stuff or breaded, cheap bits of meat and calling that a meal. Nope, not for me anymore. To succeed, I’m gonna have to look for things that aren’t fried or breaded-to-resemble-fried-and-then-frozen. There are options out there, options beyond lasagna (though that’s definitely an option, once in a while).

I just have to open up to some new possibilities… and think of REALLY healthy sides to go along with the main courses that just needs a quick heating (or a salad, ready to go, for some quick veggies).

It worked well enough today, and at no point was my stomach in rebellion or ticked off at me. I think I finally hit on the right baby steps… and then when my energy kicks in and my anemia is under control, watch out, kitchen!

Rock on, Chef (still kills me that he’s a better cook than I am… oh well, that’ll change eventually).

4 thoughts on “My New Baby Steps Toward Healthier Eating…”