Funny how this is the stereotypical day for “new life, new you” thinking, and the day when everybody posts their goals and the things they want changed at the turn of the calendar.

Mine’s a little different. I am going through my book list and seeing what I should tackle this year (leaving some lee-way this time for books that I REALLY want to read in between, instead of tearing apart and rebuilding the list ten times a year).

I have so many things I want to read. My goal is to read 100 books a year. I barely did that for 2019, and only reached that number by counting a bunch of the children’s books that I bought for the tutoring students. While they do count as books and toward that goal, it’s cheating because I’m an adult and when a book is only 20-40 pages long, it’s not gonna take long to reach that goal.

So yeah, I fudged the numbers. I DID read 101 books, actually, but I still consider it cheating to get there.

The problem was I was overly-ambitious. Not in the number of books I was reading (I’ve done 100 before, or nearly 100 before), but in the content.

I’d decided to really read the Bible, back and forth. I’ve got several different versions of the Bible: NIV, KJV (the one I got when I was baptized), a note-taking NIV version, and the ESV. I wanted to read a little of each (and put all my notes in the note-taking version from books I’d read that talk about Christianity, the Bible, atheism, Christian sects, denominational arguments, etc. That one I’m not reading cover to cover, but rather using like a mondo-reference bible.

Going back and re-reading some texts, only to put analogies and footnotes in that note bible REALLY slowed down my reading in general for the goal. I have so many books I NEED to get reading them, but I wanted to take my time with the Bible.

I eventually got tired of trying and set it back on the shelf for a while. I’ll pull it back out again this year, though. I just realized I had too many things going on and I couldn’t give it the proper study I’d intended.

I had other books to read in that time, and didn’t get very far at all with Bible reading from front to back. I wanted to read it as it was, and not read my own stuff into it. That’s why I had the note-taking bible, just to add those observations from other books in there and move along. I did get through Joshua at least, but I’d probably go back and re-read it because it’s been a while and some of the stories were getting a bit confused in my head.

So, my goal this year is to get reading the Bible cover to cover. NIV version, and possibly the ESV, too. I just wanna compare and contrast the translations and see how they are (and then compare them to the KJV that I’d read growing up, because that’s where a lot of my confusion’s lied… and it makes me wonder how some of the more in-your-face Christian groups actually feel when they will ONLY read the KJV and not the NKJV or any other translation… hmm…

That’s still ambitious, but since I’m building in some leeway into my book list for this year by allowing “impulse reads” that won’t derail my efforts, it’ll be far more manageable.

Not perfect, because I’m me and I’m an impulsive little twerp at the most inconvenient times, but workable.

And one of them is gonna be The Artist’s Way.

This year, I’m determined to go through the 12 week program outlined in the book and get it right. I’m so tired of messing it up or letting my motivation go and “forgetting”. I’ve tried to finish this program and generate consistency in my writing efforts for so many years now.

I’m not starting today, though. Probably in two weeks. I have too much cleaning and re-arranging to do before that happens.

And the reason I’m holding off is my house is a mess and I need to get organized, get consistent in my cleaning efforts, and keep things in order. Otherwise, I’m gonna fall right through the rabbit hole again and keep beating myself up.

And I’m really damned sick of doing that. 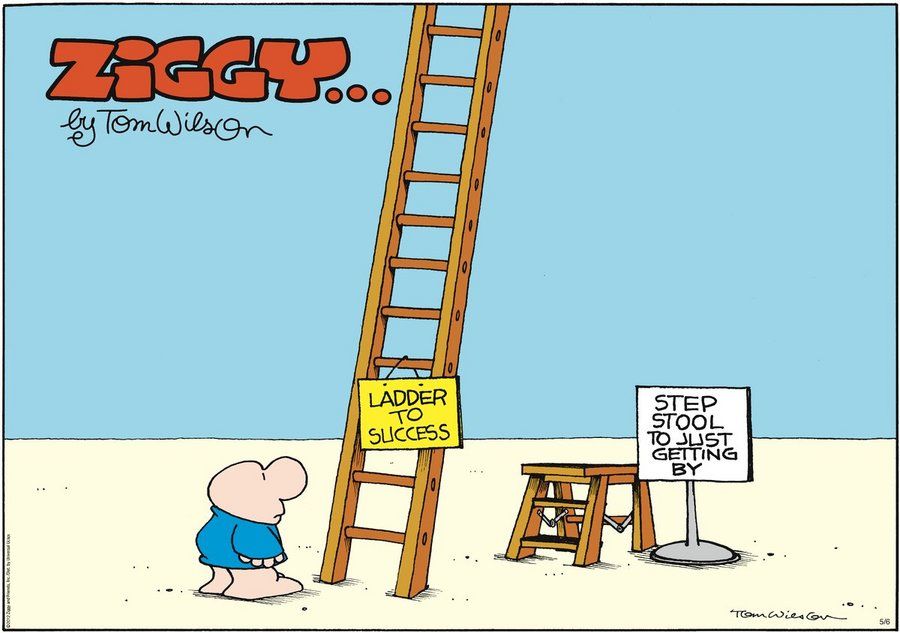 Oh, Ziggy. You sure know what I’m thinking…

Probably the best reason, though, is that other than blog posts, I don’t think I’ve written so much as a poem or story outline in two years. Not even a brainstorm or quirky first lines list to play with. I need these two weeks to really evaluate my writing goals. I used to love to write because it was the only way I could try to get things out in the open or use my imagination. I just need to flex those muscles again and look at long-term writing, revising, etc.

And my office is a total wreck. I’ve had totes I’ve stashed in the closet for the past year that I really need to go through and either store, re-organize, or throw out for good. I have to make my office look more presentable (because it’s a nice space with a tiny desk, just like I wanted), but not to impress. It’s more so when I need it, it’s right there. I generally like some form of “controlled chaos” when I’m working, a functional office, not some photo-op. However, it’s WAY too cluttered as is, and I need to think of better organization ideas, even if it means buying a few extra totes or hauling things out to the gym shed for storage because I have too many and may need them later instead (like binders).

The obvious one for number five would be health and weight.

I have a ton of things to take care of in that department, and have already started work on cooking plans, recipes, etc. Exercise and consistency there would be helpful, and I’m going to be implementing plans in the next few weeks.

Besides, all this heavy cleaning is gonna help burn calories this week. I’ll hit the mats and my elliptical next week.

I have to finish setting up my gym/shed for success. That’s the big one, because I have a whole lot of space in the gym part that I’m not using well (and a barbell rack to put together–why I haven’t done that yet is just ugh!).

The space needs cleaning up and organizing so I don’t hurt myself or others who may come over and want to use it. I miss being in there, and need to put some shelves on the walls to hold smaller equipment, my tv (and a dvd player, need to get a cheap one), and clear space for stretches, yoga, whatever. It’s a nice space, but I just haven’t had the chance to really go in there and set it up in a logical manner for the most part.

That’s going to be one of my big January things, and I can’t wait to make it look better and make me want to use it more. I really need weight lifting, and damned if I was gonna get rid of a (mostly) perfectly good set of weights that dad had before I was born. I might have to update a few things (and there’s a bench in there I have NO idea what it’s really for or if it’s completely intact), but it’s a great start. I just need storage for all the loose plate weights that he had, and if it requires another weight rack, I’ll get one. It’s just making it easy to access while leaving plenty of room.

Well, my to-do lists aren’t going to do themselves, so I’d better get cracking while it’s warming up a bit outside (and not raining yet–whew!)

Oh yeah, another thing: my to-do lists. I gotta work on limiting those things or I’ll be out of post-it notes and notepads by the end of the month!

One thing at a time, though… if I can remember that, that’s enough help right there. (hee hee).