I’m not generally the type of person who takes pictures of their food and posts it on social media every day… or ever. I had so much fun making THIS particular meal, though, so yeah… I had to document the occasion when I made something palatable on my new grill.

The first thing I had to do was preserve the pit, or season it, whatever you want to call it. I watched a few YouTube vids that said I should coat the whole inside with cooking oil (one suggested bacon grease with olive oil–which is all he happened to have right then– but I didn’t have bacon grease and I don’t care much to have everything smell like bacon). Good info, though.

So, I did that, and started it up with the last of a 10 year old bag of charcoal to treat the inside. Amazingly, it still worked. So I followed the directions, even though I was super worried about how hot the inside was getting because mine doesn’t have a smoker box to start the process like the guy in that vid up there did–gah! But I opened the lid a few times, like every 5 minutes for the first 30 or so just to make sure it wasn’t gonna catch fire!

A neighbor later told me that wasn’t gonna happen, but the max heat would diminish during the process after each time I opened the lid because the seasoning was doing it’s thing, so that was a load off my mind. Whew!

And since I still had some daylight left to go, I started up a fresh batch of charcoal and decided to make my grilled meal. I figured out which veggies I was going to roast (and what my cooking times and temps were supposed to be for my meats) and started chopping veggies during that last treating hour.

I was doing major experimentation with veggies. I’d never had a rutabaga before and found a good sized one at the store on Wednesday, so I read up on it and figured I could add that to the rest of the roasting tubers. I had a few carrots I could play with before they rotted and so I scrubbed and peeled ’em for the mix. I also found a majorly big purple sweet potato. I’d never had a purple sweet potato before, never seen one, so I had to get it. And then I had some red potatoes I was saving (but not eating yet), and I chopped a few of those up.

I didn’t have Italian dressing for a roasting recipe I was gonna use for the veggies, so I just used some of the same spices: olive oil, salt, pepper, oregano, parsley. I should’ve added a few other things, but just didn’t realize I didn’t have them and with the pit hot, I didn’t wanna go to the store. But I had PLENTY of oil and spices to go around otherwise, and cut up the veggies to put in the bowl with it. I snapped the lid down, shook it all up together, let it sit in the fridge, and then shook it all up a few more times.

Well, I’d tried timing my cooking just right. Supposedly, the veggies would take the longest, so I set those on the cooler side of the grill because I figured that was hot enough and the meat needed more heat. That ended up being not-so true. I should’ve spread the coals out a bit more to heat the cool side better, but I also blame the new tongs I got. They were so hard to squeeze to hold the slippery veggie slices that it let a lot of the heat out when I went to put them on the grill, and there were so many it took up half my 30″ cooking space. Still, plenty left for the meat, which I was gonna put up over the fire itself.

I found some pre-rubbed, seasoned boneless pork chops for a good price at the store a few days ago, and some bacon-wrapped beef tenderloin cuts.

I didn’t wanna spend a ton in case I totally screwed this up.

It took a bit longer to cook the meat than I thought, too, but I abided by the cardinal rule of pit cooking: don’t stray too far. I also had the meat thermometer handy so I could check the internal temp without overdoing it.

I can’t believe I’d never cooked with a thermometer before and just “over killed” everything on the stove in the past!

The thermometer is my friend. I must remember this from now on.

All I know is I remember the meat needed to rest, so I put it on the cooler side for a bit before transferring it to a plate. I realized the veggies would easily take twice as long as I thought they would and put the meat on a plate and then put it in the oven to keep warm while I finished the veggies. I moved them to the hotter side, brushed more of the olive oil mix on them (which made a lovely-smelling sizzle off the coals) and just closed the lid for about 15 more minutes.

I have to say, the rutabagas took the longest to cook. They’re rather dense, but I also think the slices were a bit too big, which is why a I picked every other veggie off the grates, I had to leave those on a bit longer.

All in all, I pulled the meat out of the oven, made one of those frozen rotini and vegetables packages on the stove-top, and then dumped some of the roasted veggies on my plate. 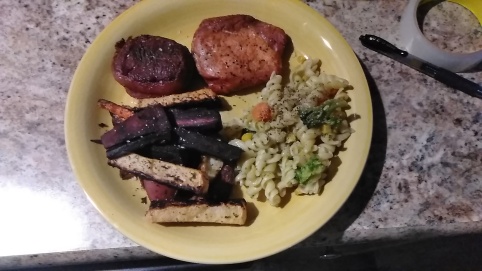 For a first try with outdoor grilling, I’ll give myself a B. The meat was perfect, juicy and flavorful as it should’ve been and not overdone on the outside. Glad I took some notes before I started cooking! It was the veggies that I had a hard time with. Maybe marinading them a bit longer would’ve helped, or figuring out the best size to cut them so they’d all be done at the same time. The flavor wasn’t bad, even if they look burnt on one side and not the other. The purple sweet potatoes look positively burnt, but it’s just such a deep purple color it took me a bite to realize I hadn’t done that at all–tasted like a perfectly normal grilled sweet potato slice.

Funny enough, the rutabaga tasted mostly like a sweet potato, too. Maybe it was mixing the two in marinade, but I didn’t notice any major difference.

I think I’ll save less dense veggies and fruits for direct grilling next time, or get my cuts more uniform first. I know zucchini, squash, and other things can easily be grilled. That is probably the only way I could enjoy those types of veggies… as long as I did it right. Potatoes and other tubers might benefit more from a foil packet with herbs and butter next time.

Well, that was my first day of it. Tomorrow I’m going to the store to get some more beef (of some type, still deciding) and I’ve got some ears of corn I’m itching to grill. I think grilled corn’s been one of my fave things on earth, especially when it’s still in the husk.

I’ll thank Rex Stout’s Nero Wolfe for that little tidbit. No more boiled corn for me, thanks.

Millions of American women, and some men, commit that outrage every summer day. They are turning a superb treat into mere provender. Shucked and boiled in water, sweet corn is edible and nutritious; roasted in husk in the hottest possible oven for forty minutes, shucked at the table, and buttered and salted, nothing else, it is ambrosia. No chef’s ingenuity and imagination have ever created a finer dish. American women should themselves be boiled in water. –“Murder is Corny” 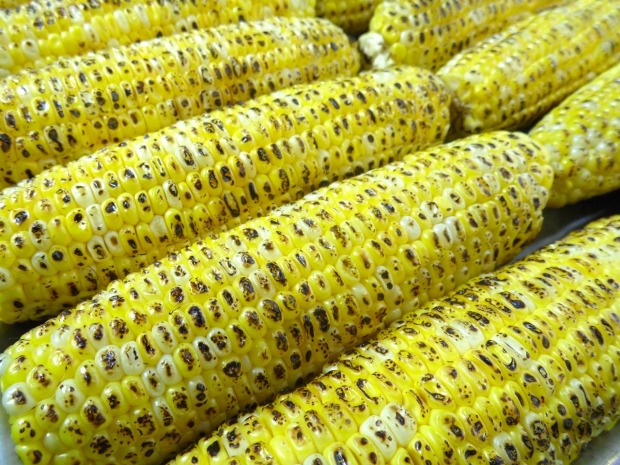