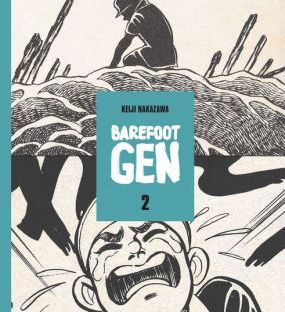 Whew–the first volume wanted to knock me down with what I’d read, the way Gen’s family was portrayed and how things changed the day the bomb went off. Now, we’re in the aftermath, the living death and struggle to survive… if one wants to survive at all.

Barefoot Gen vol. 2: The Day After has our young hero, his mother, and just-born baby sister trying to understand what’s happened to their city. What was bustling and constant was a wasteland full of corpses and those who wish they were corpses just to avoid the agony of living…or slow death.

Gen’s mother Kimie can’t feed her young daughter because she can’t produce milk, and so Gen goes out to try and get mother something to eat so she can produce. Kimie has her own harsh dealings with other people, other mothers who can’t feed their young or have died trying while Gen is trying to find food and help others along the way. Though he watched most of his family die, he still thinks he sees his sister. It’s another girl, but he ends up trying to help her not die. For a seven year old, he’s doing his best to be brave and resilient, even as others despair or collapse from injuries.

At this point, nobody’s really sure of what the bomb has done, but fear begins to spread as healthy soldiers that have come to help the city end up dropping dead, and doctors have no room or supplies to help anyone in Hiroshima. The illustrations showing the dead make you feel ill at times and numb at others, just because you can tell this is what our 7 year old hero has experienced. The descriptions of how Gen feels and what he’s thinking is very direct. He’s a simple kid trying to understand what’s going on, and at times seems numb to the carnage, almost mad trying to imagine his family back, crying in despair, and then brimming with determination and life.

Gen is a most interesting character to follow, and you wonder how he and his mother and little sister will get through things, even after accusations of theft, of beatings, and of utter heartlessness by those around them as they try to find a place to go, away from Hiroshima and to safety.

Some of this story has parallels to another amazing Japanese work, an 80s Studio Ghibli film called Grave of the Fireflies (I’ll link to Roger Ebert’s review). That’s a tissue-grabber of an animated feature right there, though there’s no mention of the atomic bomb (Seita and Setsuko encountered firebombing)… something in the way children and the displaced are treated in this film is very close to what I started reading in Barefoot Gen.

I agree with Ebert, definitely one of the best war movies ever made. A must-see.

Barefoot Gen, vol. 2 is amazing, and not like some superhero comic where you just browse through the cool artwork for the action. No, the dialogue and images–simplistic though they may seem compared to other manga or comic artists–demand attention and absorption.

Also, for those used to the American story of WWII and Japan, it’s a bit startling to see so much “Yankee-hate” in a few short scenes. The kids really can’t understand what they’d done to deserve such destruction rained down upon them, such a terrible weapon. Americans might be thinking “duh, you guys started the war.” But then again, these are mostly civilian children grieving and asking the questions.

I’m more than willing to get to volume 3, and I have to wonder what else is coming for the survivors of this family and the people around them.