I’ve been missing in action because being the parental figure/food god of pawed or feathered beings wasn’t enough. I had to add fins to the mix this week. A. Lot. Of. Fins (and antennae).

At first I was going for flippers. I love turtles, always have. And I went to the pet store to get some more food for my pawed ones, and seriously started to contemplate getting a turtle aquarium and habitat stuff. Seriously–the idea of seeing this wrinkly, ugly-cute smiling face just from a belly rub all the time? Shut up and take my money…

I had to think twice only because the “starter” aquariums that were on sale were still crazy expensive, and I’d have to upgrade them in a couple of years to a 40 gallon MINIMUM. Yikes. I didn’t think I’d have room for that.

And I couldn’t help thinking how I’d never be able to take it out and let it walk around because my dogs would try to pick it up and eat it.

I found that out when I went nuts and spent hours learning how to set up a new aquarium. I’d never had fish before and bought one of those GloFish aquariums (just a 5 gallon in case I screwed up). I was told to get it prepped and let the water cycle for about 24 hours before I put any fish in it.

I was disappointed I couldn’t go ahead and get those cool tetra fish that glow in the dark (sort of). Well, I’m sure they’d be beating the hell out of the water bag if they had to wait as long as it took me to finally get the thing set up in the first place.

And I wanted to make sure the tank wasn’t gonna leak all over the damned place.

So, I got the fish, and boy, I’ve had fun watching them swim around the past few days.

I thought about it so much so I started wondering what I’d do with a bigger tank.

I had always thought about having a shark tank. Granted, what’s sold in the pet stores as “sharks” are essentially minnows that get really big and have fins that look like shark fins. That’s the big difference, and I’ve known that a while.

But I really got to thinking about how big a tank I’d need, how aggressive they can get to tank mates, how many I’d actually be able to have in there… yeah, that just wasn’t gonna happen.

Didn’t mean I didn’t go ahead and buy another tank, though.

I did some major measuring and realized my accent cabinets can have and hold a 55 gallon tank on them. I’d originally planned for a different one, a different size.

And yet, I wanted a very long tank that the fish could swim a good distance in.

And there went another night of prep last night. It took hours to put a gallon of water at a time in that tank and some basic prep as far s fake plants and gravel. And considering how little sleep I got last night, I’d be better off going to bed right this minute.

But I had to just relax and hang with the dogs a while, enjoying the light and sound of running water and all the little fish in the tank.

I got a bunch of species that will get to anywhere from 1 to 3 inches big maximum. So, there’s about 20 fish and snails in there right now, two or three of each species. I was more than happy to select a few of each so they can hang with each other. I didn’t want any aggressive fish that would try to kill the others. Nope. Mostly just small community platys, mollys, and some small neon tetra. 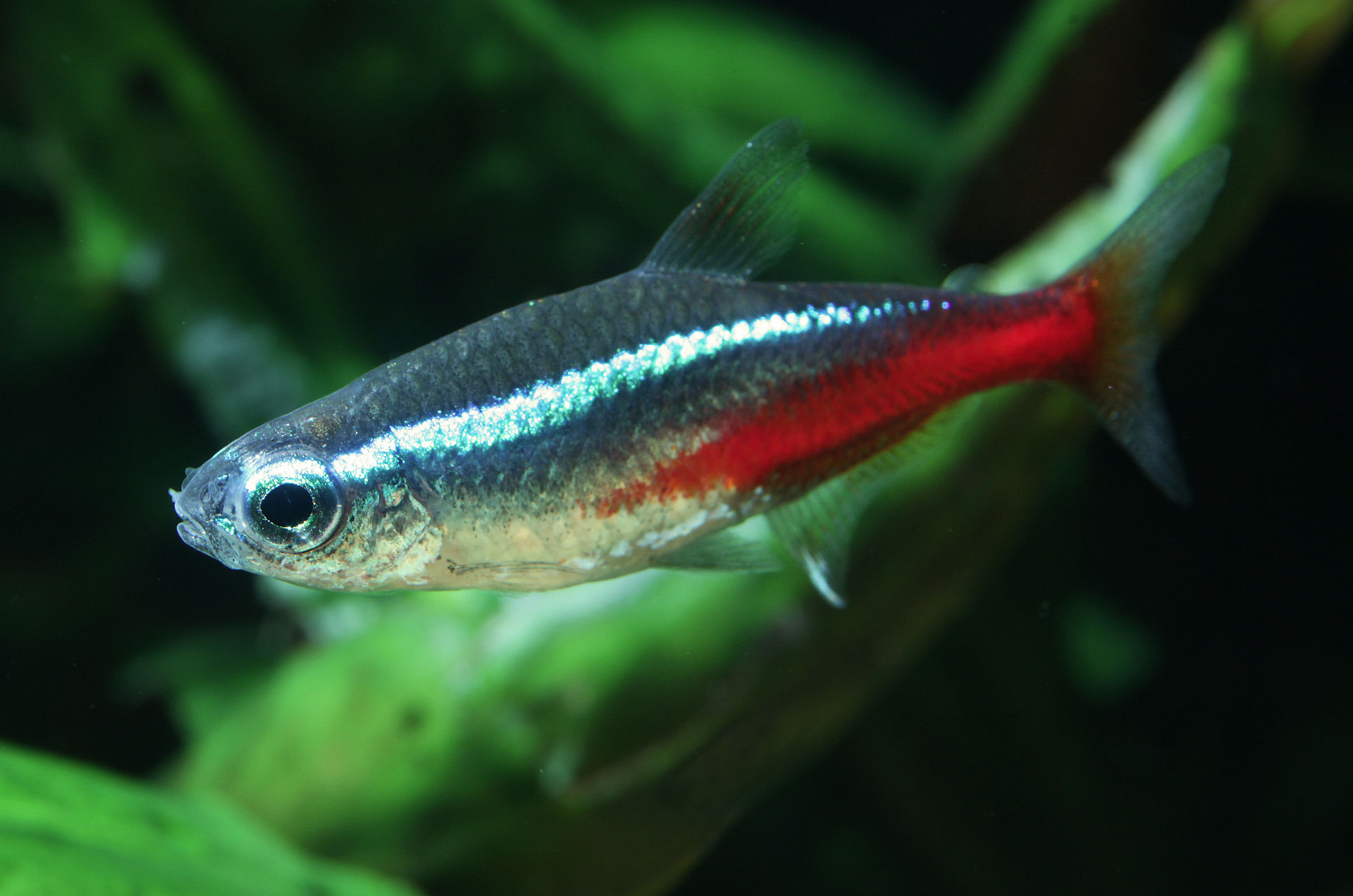 It took a long time to do some last minute tweaking, adding some live plants and covering up some lines to anchor the LED air hose to the bottom of the tank. And then there they went. All these fish and snails are just swimming all over this huge tank, the biggest fish is about an inch and a half right now. I wonder how much fun and frenzy it’s gonna be when they all get to full size.

I just hope they all survive the night and no poor thing decides to freak out on me and have a heart attack.

Yes, I think I spent WAY too freaking much money this week on fish, but I can only imagine how great this really is in some respects. I kept thinking about ideas and tried to get my tanks just the way I wanted. And wow–even if some logistical compromises had to be made, it gave e some hope that I can really get my creativity back in other areas.

I want to look at the little world I helped to make for the fish around me and see where else I can put that creative energy.

I want to think about description, and how to make it work for me again, only better. I haven’t written stories in forever and an age, and that’s what I want this awesome tank behind me to help me with.

And the sheer complicated nature of taking care of fish– I have to see what I can do, because in the long run, this could help me get healthier by making me pay attention, not get impatient, get some movement in me, and just do the absolute best I can.

Heavens, I’m sleepy. I hate this, but I’m about to sleep sitting up and I gotta take some time to contemplate where I can take my budding creativity from here (in my sleep, naturally).

Can’t wait to see what my neighbor’s kid thinks when he sees the variety of small fish in there tomorrow. I have to watch once in a  while because i’m curious what all they’re going to do.

I’ll definitely be having some fish-filled dreams tonight. Maybe they’ll lead to some awesome ideas…