I had to think hard about how old this Amazon parrot is in my house, and I realized it’s been around for 3/4 of my life now. He’s about 27-ish, a bird my dad picked out from a lady who had probably a thousand birds and raised them from chicks. I remember going over to help her out sometimes and her feeding this little guy with an oral syringe, sucking down that mushy cereal stuff.

Hard to see that happy little chick now. He got bigger, dad didn’t take him out much anymore, and now, he HATES being out of the cage. I don’t think he’s been out of the cage in years, because he’d fly around and squawk like we were trying to de-feather him, and attack our fingers if we tried. It’s tricky trying to clean the darn thing while he’s still in there, and I can’t do a thorough enough job.

And then there’s the dogs, hoping to get a piece of the “annoyed green chicken” if we make a wrong move. You should see them when he abruptly drops from his perch and lands on the paper. They act like they’re hoping he dropped dead and they can eat him now.

He’s been ill off and on the past few months. I really grew concerned when I saw a cluster of seeds in the bottom last night, but didn’t hear anything much. I noticed only that he was barely talking or interacting the past couple of days. This morning I realized he was vomiting them up because most of the seeds were whole (and some stuck to his feeding perch). I spent half the morning looking for info online because I’d never seen vomit in his cage before.

All I got was a barrage of possibilities (like searching WebMD) and “go to the vet.”

Well, I have a few problems there.

My dad got him a majorly big cage. That thing is practically a mansion for this guy. And he loves his cage. I could leave the door open all day and night and he’d never leave it.

Of course, with the dogs and all, I wouldn’t, but you get the point.

So, if I had to get him out and take him to the vet, I don’t have a smaller cage or pet taxi I could put him in to get him going. I heard that an old pillowcase that I wouldn’t mind him chewing on or tearing up would be a good idea, but honestly–that kinda horrifies me. I can just imagine him getting oh so hurt in that thing, attacking and clawing at it.

And today it’s pouring down rain. I’d stress him out so badly and make him so cold he’d probably die before I got to the vet.

And as annoying as he can get at times, and as much as he seems to hate me at times… yeah, I don’t want anything happening to the camera-shy bugger. When I get laughing at something on TV or a joke, he’s in the kitchen laughing away, too. it’s just fun to listen to him… just hasn’t happened lately.

I’m considering getting a small travel cage when I go by the pet store today just in case, one I can cover nicely and will at least be manageable and less stressful. I haven’t had small enough animals that needed a pet taxi for 15 years, so those went bye bye eons ago.

Funny enough, as of this moment he seems to be eating alright. No indications that he’s throwing up anymore or needs to. He’s chowing down like nothing’s the matter (though he’s being messy because I put more of those pellets in his bowl and he ignores those, flinging them out on purpose).

That’s the crazy thing. I thought for sure that dad would’ve done a ton of research on Amazon parrots before picking this one out and taking him home. But as far as the bird’s diet goes, we’ve been feeding him wrong for over 25 years. Too many seeds. In fact, that’s about all he ever ate. Occasionally I’d put a small chunk of apple in there, or a cracker, and he might eat it (or rather dad would put it in)

Buddy only let me start giving him stuff in the open the past couple of years. Guess he finally realized I’m the one who’s been feeding his feathered butt for most of the past 10.

Apparently, seeds are too fattening and don’t have nearly enough nutrients for birds (just about all birds, but especially these), and should make up around 1/4 of the bird’s food at most. But that’s all we’ve given him all along, parrot mixes and the like. He’s always ignored the little pellets that were in there (which has all the nutrients they need), and just went for the seeds.

I did my own research when about two months ago when I noticed he had a bad cold or something, an icky nasal discharge coming out. I’d never seen that and was told it might be a Vitamin A deficiency among other things. Well, I got supplement drops to put in his water and after a long week, the symptoms went away.

When I realized we’d been feeding him too much of the wrong stuff his whole life, I tried to entice him with other things he might like. I got some dried fruit to put in his bowl, the bright colors to entice him and all. I figured it was worth a shot (and there were some banana chips in his mix). I added some more of those and he seemed to eat them. Then I put in some dried papaya (cutting the chunks up a bit smaller so he’d actually grasp and try to eat them), and after a while he got used to it and started eating those.

So, that’s a good start, but I keep reading that because of the natural sugars, I should limit fruit a bit more. Vegetables are apparently the next best thing to those pellets for a caged bird. 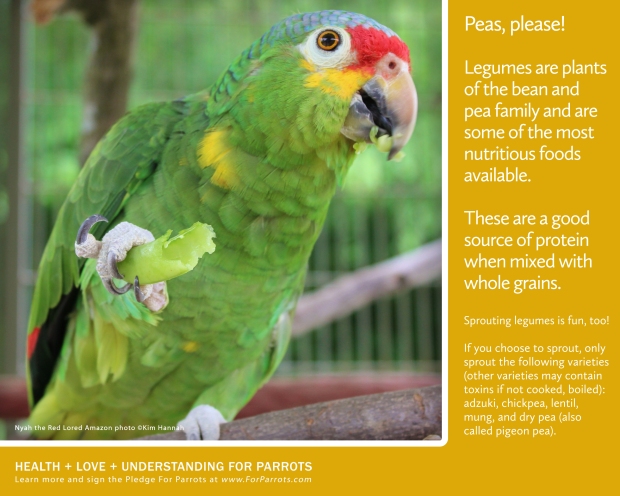 That’s a pretty Amazon there–Buddy doesn’t have any yellow on him like this variety. He’s what they call a “green cheeked” or “Mexican Red-head.”

Vegetables? I’d never have thought that for a tropical bird. I tried some torn spinach leaves on the bowl, which he promptly knocked out and I removed later. I’m going to try some thawed frozen veggies and see if that does any good. I never would’ve thought about beans for birds, but that may well be an option (as long as they’re cooked–the uncooked ones can be toxic from what I understand). I did see that some grains are okay. Some like pasta bits or cereal.

I’m curious to see how he likes my Raisin Bran flakes. Hmm… and what about Grape Nuts? That’ll be worth a try, though a little bit of oatmeal might be awesome too.

Nice to know I already have a ton of this stuff to experiment with, anything that diversify and help his stomach out.

There’s a lot that’s worth a shot at this point, because when it comes right down to it, I am unable to take him to the vet today. Not just because i have to go to work, but I just found a vet’s office (thanks to three or four phone calls) that can help birds, but when I tried to call and get info and directions, nobody picked up the phone.

Must be a busy day, or something is up.

And I don’t have a cage to take him out and get him checked out, either.

Well, I’ll keep watching him and checking the paper for any more mishaps. Hopefully he just ate too quickly earlier and needed to “dislodge” a particularly large item. And hopefully I can throw some bean sprouts in there later and see how he likes ’em.

What an icky, tiring, rainy day today. Fits my mood, along with this headache. I was hoping to go outside and plant some more fruit trees. I think I’ll nap away this headache for a while and then head to work.

P.S.–When I played that clip back to make sure it was the right video on my laptop a minute ago, it made Buddy start chirping and going “pretty bird” all of a sudden. Hadn’t made a peep other than an annoyed squawk all morning and it’s his voice he responds to all of a sudden. Figures.

One thought on “Dealing with a semi-sick bird at home, because he hates me 90% of the time & the nearest avian vet is an hour away…”