I think I was 15 when dad bought me my first guitar. It was a typical six-string guitar, and one I wanted so badly to learn on. The difficulty was…well, the difficulty in playing, and not knowing anybody else who could give me pointers. I also didn’t have much beyond the initial exercise books to play and so it got boring. And I was intimidated by how good my favorite artists were, and believed I could never learn to be that good. I kept trying for a while, but that guitar eventually went to the pawn shop when my truck’s transmission went to hell.

That was the end of my guitar playing for a while. It wasn’t until this week that I remembered why I wanted a guitar in the first place as a teenager.

What jogged my memory was watching a video online about the top 10 best acoustic intros (according to Rick Beato), and he played them all, except for one.

Honestly, every song on his list I’d LOVE to learn how to play (making a sheet music list after this…).

That one he felt he couldn’t play well enough was the guitarist and song that made me want to learn guitar in the first place: Nancy Wilson from Heart. The song: Crazy On You.

Probably not surprising, but I remembered why THOSE were the biggest influences. Maybe it was a smattering of feminist budding within me, as well.

You see, other than seeing some “friends around a beach fire” scene in a movie or t.v. show, I don’t think I’d ever seen a woman playing the guitar before. It’s like it never occurred to me that women could play the guitar professionally. I’d seen keyboardists and vocalists, or teachers, or maybe all girl rock bands… but not with Nancy’s flying fingers, that type of crazy ass skill.

I only noticed it (and I’m showing my age here) back when VH1 was mostly about music and artists, and “Behind the Music” played constantly. I saw the bio about Heart and was amazed at how these sisters got their musical start, and while I knew a little about Ann (I mean, let’s face it, you knew that was a woman singing), Nancy, I knew far less about.

Seeing footage of Nancy just strumming along, her fingers flying and playing so awesomely, and she’s not some back-up player, but up front and showing her stuff, just showing what she’s got… yeah, damned awesome to an introvert with severe stage fright.

Damn, watch those fingers fly in the intro!

I think the stage fright aspect of it, the possibility of being in front of people some day playing really made me half-hearted bout getting good at the guitar, at first. At least in part–the rest was just not having good prep and help making sure I was doing it right.

I became an immediate Heart fan, more than I’d already been. I wanted to hear all the Heart music I could get my hands on to hear more of those vocals and that awesome guitar.

I wanted to become a singer-songwriter, thanks to a few more influences, but Heart was the initial one. They made it seem possible that someone like me could maybe learn how to play, and maybe do something with it.

And now here I am, nearly 20 years later, finally taking that step to make music an important part of my life, not just something to sit back and appreciate. I am itching to learn and create.

I finally started my piano lesson yesterday, and my second guitar lesson. My piano lesson went better than I thought, and it helped me think about what I could be capable of. I told my teacher how I was out of practice reading music and playing it in any form, and knew next to nothing about the bass clef and how to play with two hands.

However, I seemed to have a better ear than either of us realized. I sure figured pretty quickly when I hit the wrong note, and when I turned my back and she asked me if it was a major or minor chord, I was able to get it right (to me, the minor chord had something a bit “off” about it, and that’s what made me think it could be minor).

It helps that the instructor’s just as bubbly as–if not more so than–me. I think we’ll get along, and she’s going to push me to put myself out there and play in public, and make friends and possible music-mates while I’m there.

I have to say, that was a helluva hope I had, anyway. Like I started thinking before, what good is a room full of instruments if nobody’s going to play them (other than me)? I’d hoped to have a place others could come and we could jam if we needed a place.

So much to learn and try to do. I’m actually looking through piano pieces I want to work on while studying exercises and chords (and my guitar the same way).

Might as well work on music while I practice. There’s gotta be a lovely middle ground to get the best of mechanics and fun in learning a new instrument.

I’m determined to find it. Music just makes me smile too damned much to give up again. I’m gonna listen to some Heart for a while and think about what other musicians I would love to learn from (and be inspired by).

Seriously, got a good stack of music books at my beck and call–might as well go through them and see what I’d love to start playing.

Hmm…wonder if there’s a Heart sheet music book out there.

Aw, crap. No more shopping for a while, dang it! Time to play… 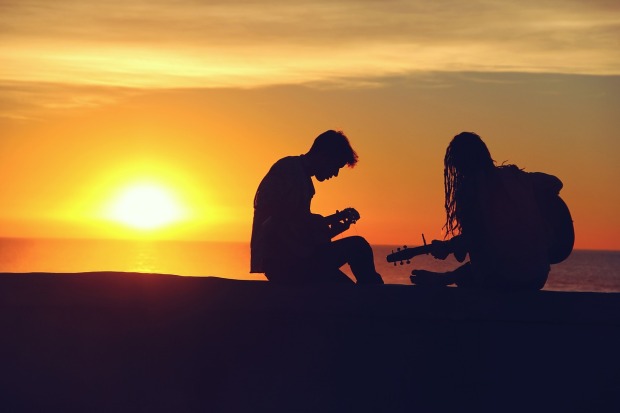 2 thoughts on “Remembering Inspiration, or, Who Really Made Me Want to Play Guitar…”