It’s 4 a.m., and I’m awake writing this now after my umpteenth bad dream in the past four hours. I’m annoyed and have a huge day ahead of me (lots of cleaning and my first guitar lesson for one thing).

But until I get this thing out of my head, there’s no such thing as sleep. With all the crazy, the bad dreams that were from WTF land of all places, one thing became clear.

I need to learn how to use the weed eater.

…I’ll let you read that again.

So, you’re probably thinking “WTF?” yourself, like you didn’t read that right. I’ve never used a weed eater in my life, and now I’m paranoid about the bad things that could happen because I couldn’t use the weed eater (and how much harder maintenance in the yard is because I can’t use it).

My dad always let me push mow but never once taught me the weed eater. I don’t even know how to crank the damned thing up. I guess he thought I’d be careless around the house, trees, fixtures, etc. with it and that’s why he never wanted me to use it.

I have two in the garage–one works and one doesn’t–but I have to learn how to use one.

My dreams got me this far. But also when I got in last night kind of started it all.

I still have the ruts to fill in the front yard, and  thought about filling some when I got in. But I took a good look at the backyard and sides, where the grass in some places was past my knees. 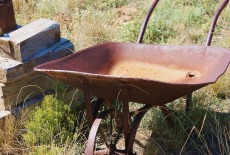 I said “no way in hell is it staying like this another night.” So I got my gas can, filled up the riding mower, made sure I got all the yard debris away that I could (some will require a lot more work), and started mowing.

I didn’t realize how bad it really was until I got a row down, even going slowly.

Some of the grass is that grass that just springs up and bows over the yard like bits of netting, that it’s so thin and spindly like a wheat stalk. But underneath–that grass was very thick. I went slowly at the start very close to the house because I wanted to hover and really cut that grass into little bits, spread it out nice.

Where my smaller lime and fig trees are, though, I had to be super careful. I almost forgot where they were except for the wide space I’d put mulch down around them. That’s probably the only reason I didn’t run over them.

While that may sound bad enough (and I lost count the number of crickets and cicadas that jumped on me on that mower when I started taking all that grass down), it was the areas I couldn’t get to that got me thinking.

There’s a hauling trailer next to my garage, the garage itself, and around the house that I REALLY want to get with the weed eater, because if there was a standard problem in all my crappy dreams tonight, it was snakes.

I had this thing where I imagined snakes found a “toehold” close to my house. I lost count the number of times one came out of a hidden space while I enjoyed the outside and bit me, or me getting too close to a tall-grass area, only for me to step on it and it bite me.

One had a kid in the yard and somebody messing with a snake they found, and it bit the kid.

One had me trying to move the hauling trailer off its spot in order to mow that area, only to get bit by a hiding snake.

And I won’t go into the other dreams that basically had all that tall grass covering the areas under the garage (a portable building with a ramp), with old ladders and other odds and ends I’d have to move aside in order to get the grass and not break things.

My biggest worry is something I need rolls under there and ZAP!

My heeler mix liked to go under the garage once in a while to sniff around because there used to be rabbits that went under there (and other dogs).

What if a snake takes up residence?

I made myself a promise last night when I came in–NEVER again let the grass get that freaking high in the yard so close to the house. NEVER again.

There are areas of the yard, namely the back third (or quarter) where I wouldn’t mind leaving it grown up and thick. It gives a nice buffer and some nature and protection.

But that tall grass was becoming a threat to me and my dogs.

Never again will I let the grass get that high. I’d pay somebody to cut the damned grass if my mowers ever went out if it got that damned bad. Push-mow if the rain won’t stop and you worry about the big zero-turn radius mower getting stuck. It’ll be slow going, but it could work, at least close to the house.

I think it was even thicker than that, if not quite as high. Ugh…never again.

I need to learn how to use the weed eater. It’ll help the air conditioner, too, because the grass is probably making it work so damned hard right now, blocking air flow and the like around it.

I figured that might be the case when I had knocked the temperature switch down but it was still freaking hot–of course, I could blame the scary dreams for the sweat and the heat, too.

Well, my neighbor’s likely home tomorrow afternoon. I’m sure they’d jump at the chance to teach me how to use my weed eater (it would probably make them relieved that my yard would stop looking so shitty if I knew that little fact).

Yeah, there are benefits all around…especially if I say “screw it” and look into electric ones. I have a feeling the weight of the damned gas ones are why dad said “don’t worry about it”.

Well, it’s my house and my yard now, and I’m damned sure going to be concerned about it… or now that I’ve expressed my worries and made some plans, maybe I can catch up on sleep. I want to be a good student tomorrow afternoon when I learn guitars and weed eating.

It’ll be a full day.

I think it’s time to get some water and try this sleep thing again.

Don’t need to be nodding off before my lessons.