For once, I decided not to let YouTube reign on the TV while I cleaned and worked on jigsaw puzzles. I mean, I have tons of movies DVR’d that I haven’t watched yet, and kind of went randomly between a few. Some I got 15 minutes into and decided “no thanks,” others I really focused on.

Now, Voyager is a movie I’d heard a lot about. Can’t say I was really much a Bette Davis fan, but I can become one part thanks to this movie. I was a little amazed at what the movie was about and how unique. If you like old movies and haven’t seen it, I can definitely recommend it. It’s a story about an old-money family spinster named Charlotte who’s been stuck under the finger of her mother and finally has a nervous breakdown. She gets better and while seeing things for herself and gaining independence, she meets a man and there’s romance.

Okay, that’s not exactly unusual, except that she’s been trying to help this issue that’s kept her down her whole life (and her mom keeps trying to regain control of her), but the man’s in a very unhappy marriage with a daughter who knew she was unwanted by her own mother. It’s a unique choice, and I gotta say (other than the damned smoking in pairs thing all the time), a great flick.

The other movie was Craig’s Wife, which has Rosalind Russell playing Harriet Craig, a woman who seems pretty odd at the start of the film, visiting her sick sister in the hospital. Her niece is there, too, crying while Harriet seems to show little to no emotion. She actually gets her niece to come back home to New York with her, though worn out by concern for her mother, the niece didn’t get the chance to tell mom she just got engaged. 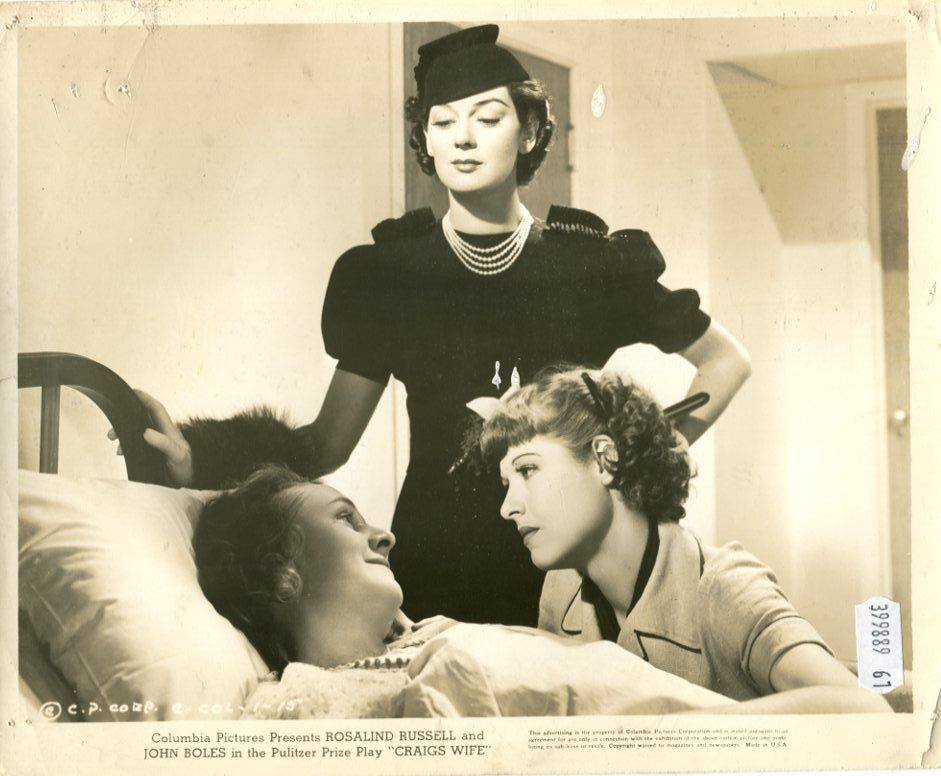 Harriet thinks she’s being silly and stupid, and that she married Walter because he could give her a comfortable life and that’s how she loves him. She seems very capable of faking romance when we see her with him and he’s over the moon for her, but you quickly realize the way she treats people that she despises people being in her house and around her things unless absolutely necessary. Over time, different people try to get Walter to see her domineering ways and wonder what he’s going to realize about his perfect wife.

Now, what was it about these two flicks that got me thinking?

What got me with Now, Voyager was Charlotte’s frustration with her life and feeling like the unwanted child. More than that, she came along so much later than her other siblings, so she became the “stay at home and tend to mother” kid. Well, I kinda became the stay at home and help dad kid, by default. I’m an only child, and I have to wonder, would my life have been the same if I had siblings? Would I have stayed home anyway, or learned independence and left a helluva lot sooner.

I’m not saying I was under dad’s thumb all the time (certainly not like Charlotte was). Not in the sense that he directed everything I should do and spat out criticism all the time (and mom wasn’t quite like that, either, though her criticisms could cut as sharply at the worst times). It was more he knew he could wear me down.

That’s what I noticed the mother was trying to do most with Charlotte–wear her down and make her not bother trying to change things. I got to thinking about this because I have a distinct feeling with my social anxiety that I’m already a spinster and will probably remain as such.

My worry is that I’m already becoming like the less greedy version of Harriet from Craig’s Wife.

You can boil the whole flick down to her liking possessions more than people, and gradually others see her for this grasping, controlling person who wants to be noticed for all the right reasons and what her house looks like. It’s a sad existence, and sad to see things as they go along, but wow–what a story.

I don’t give a rat’s ass about money, so I’m not a gold-digger trying to marry a huge wallet. I’m more worried that I’m so concerned about my house–now that I have one–and keeping it just the way I like it (for now, at least), that I won’t allow any changes to develop or anybody to live with me (or I live with them and change everything).

When I take a breath, I can chalk this up to just having my own house for the first time in my life and it’s the novelty of it that’s getting to me… but as I’ve always been alone, I worry I will become Harriet and just so particular about the way things are that I won’t be able to trust anybody in my place.

But now that I’m aware of it, time to work on it.

I just find Sundays so strange. I mean, they really do seem to mess with me in one way or another…and today’s movies just resonated more than I ever expected.

One thought on “Watched “Now, Voyager” & “Craig’s Wife” for the first time, & noticed some odd parallels for myself…”