Thanks partly to this ankle injury (still pulls and hurts a bit, but not nearly as bad as last Friday), I’ve been sitting on my rear, watching the rain and trying to finish some jigsaw puzzles.

I dunno what the deal is, but I’ve had bad luck twice in a row with jigsaw puzzles that I just bought. I was doing a panoramic version of Van Gogh’s Starry Night (pictured up above), easily the hardest one I’ve done yet, and what did I find?

I’d just bought it a few weeks ago, and this was the first time I opened it.

All that hard work, and the piece is missing. 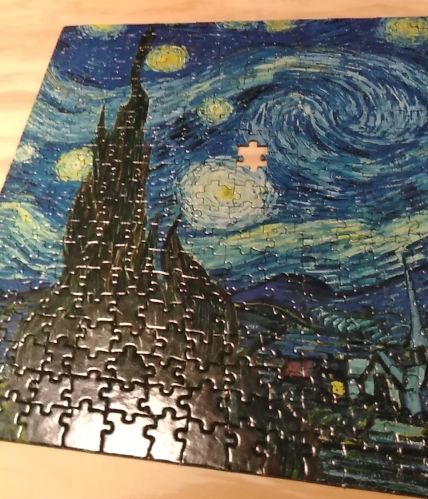 I was ticked. I spent over a week, nearly two working on it. The amount of swirl patterns and distribution of blue tints made it REALLY tough to finish.

I had the perfect place, too, ready to go. I’d hoped to glue it together, let it dry, then hang it above the door to my library.

At least, that was my hope.

Unless I can get the company to give me another one.

And yes, I checked everywhere. I cleaned off the rest of the dining table, in case the piece flew off and got in the middle of the other stuff there. I checked under the plywood I set it on. I checked under the puzzle itself by moving it all around gently to show a bump or dislodge the missing piece so I could put it in.

I checked the floor. I lifted up table legs and moved chairs. I used a flashlight, a broom and dustpan, and still no piece.

Sheesh, and it was a nice puzzle while it lasted. Very annoying.

And now I’ve got all these other puzzles I haven’t even opened yet, and am waiting on to get done, glued, and put on the wall.

I think of it as a poor man’s art gallery, to have all these puzzles up (and maps, at least until I get to painting more of my own stuff and hang that up). I was glad to find some frames that fit the “old” maps I had of Texas cities. 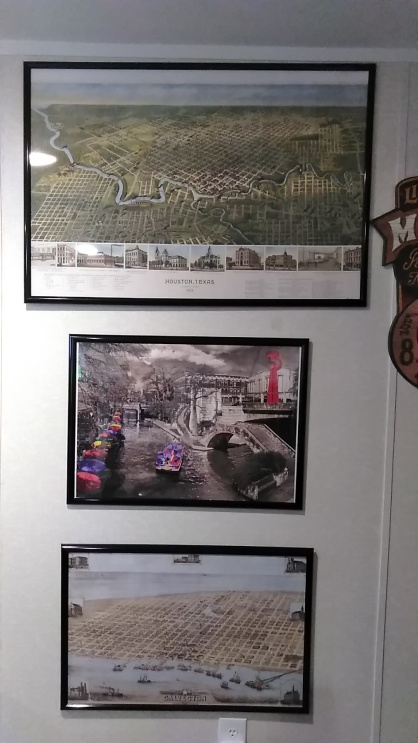 Ugh, maybe I’ll go online and try to get a free replacement puzzle… or because it took so freaking long, maybe I’ll get a different one.

Now that I think about it, I might still have a print I bought at campus that’s normal sized…but I’m not sure it survived.

All I know is that if my Great Wave of Kanagawa is missing pieces, I’ll really be sore. That one’s color schemes may be as damned difficult as this one’s was.

Guess I should pack it in and resume the Japanese gardens one that has oodles of colors and may not be quite as hard now.

3 thoughts on “When wasting time has turned to wasted time: a pet peeve.”