Let’s say my To-Do list for this week has totally gone by the wayside. I should be working on a bunch of stuff and getting my instruments in tune to play.

Part of me blames a day-long headache for what’s happened, and a lousy nap that barely took the edge off.

Maybe it shouldn’t be surprising that I had Billie Holiday’s rendition of “Gloomy Sunday” going off in my head most of the day… when my head wasn’t pounding. I have to chuckle thinking about that, because it fit so well.

And the fact that the original was one of the most banned tunes in Europe in the early 20th century because of the number of people who would commit suicide after listening to it.

Nice to know I’m not the only person who feels like Sunday can drain the life out of you.

I’m annoyed because I was hoping to get a lot of things done today. I did some sweeping and a bit of cleaning, but more than that, I wanted to clean up the yard and put some more pictures up, clean my office again, etc.

My dogs were okay with the day, except for the hours I tried to take a nap…or the hours I spent at the kitchen table. I finished a panoramic puzzle the day before and got to start a new one yesterday. The Monet’s :Waterlillies: took nearly two weeks to finish (all those swirls of blues and purples were really tricky to figure out).

Now I’ve got one I really want to put on my wall: the San Antonio Riverwalk puzzle. It’ll fit nicely between my reproduced “old” maps of Houston and Galveston respectively. 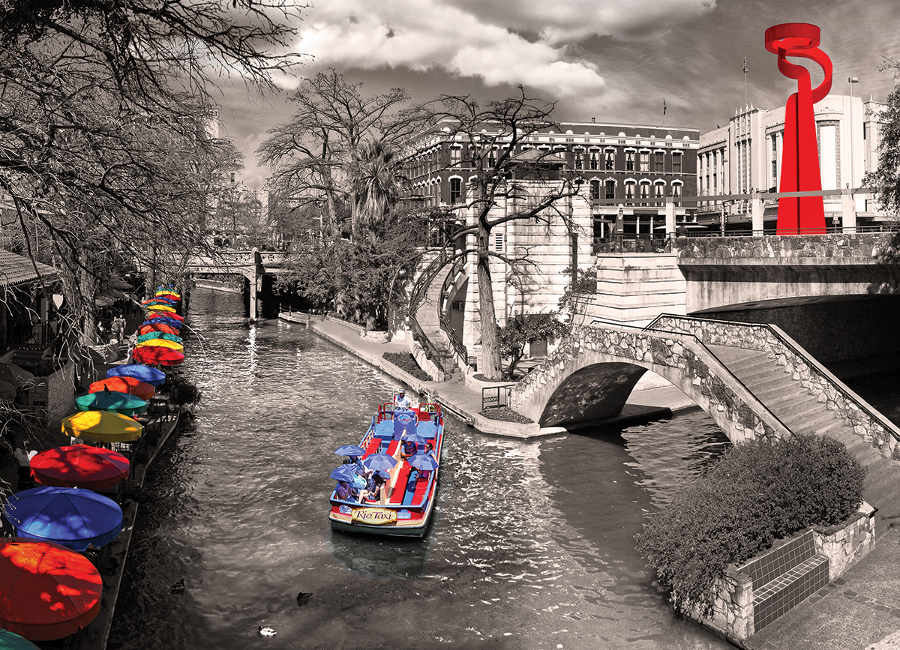 That’s the puzzle from Eurographics. I love a bunch of their puzzles, and this one’s gonna work well on that Texas wall.

I’ve gotta admit, I got the colored segments done yesterday, and then just kept on going. I have probably 3/4 of it done already, and I’ve had to force myself to stop because my headache kept coming and going. I could’ve gotten a lot of Bible reading and Masterclass work done today, but my eyes couldn’t focus on a screen.

So, listening to evolution lectures on YouTube became the order of the day. Each time one ended, I stopped putting the puzzle together and tried to do something else.

One good thing happened today, though: I’m starting The Artist’s Way again, and I found a way to do the morning pages that I think I’ll stick with as a good ritual.

Granted, this morning I was able to sleep in a bit, so I took the dogs out and brought my clipboard and pen with me to the porch. While the dogs ran around and went potty, I sat in one of my wicker chairs and wrote out the morning pages for the first time in over a year. It was nice to sit there in the early morning, the sun bright enough to write by, the birds in the trees and dogs barking at the squirrels. It was a nice way to spend 20-30 minutes, and I know the dogs were happy to be out that long.

I’m just mad it took me that long to get started again. I’d thought about it for weeks, but somehow never let myself re-start the program and double check what my focus should be in the first week or two.

Honestly, I’ve never completed The Artist’s Way, but I’ve wanted to work with it. The morning pages were always tough to do, but helpful in the long run. Eventually they became a good habit, and they made me better, more focused, and stirred up ideas to write again.

And that’s what I need most. I need to get back into writing my stories (and this blog with more regularity). My files are in order, my notes are on the shelves…there should be nothing preventing me from working on those stories and general ideas.

Depression stinks. I think we all know that. But it stinks in the way that my ability to take care of myself and what I need to do has gone totally by the wayside. I had to force myself into the kitchen to eat something when I was really hungry (and iced coffee was not keeping me going), but felt so lazy I didn’t want to cook anything. I managed to heat up the last can of Spaghetti-Os and eat it.

Other than Progresso soups, I’m out of mostly “ready to eat” stuff in my cabinet…by design. I’m just annoyed that my headache wouldn’t let me go shopping at the store today, because I’d planned to dig through my recipes and make something today from my books.

At least I have a list ready to go, and tomorrow before I get home, I’ll make sure to go shopping and cook something simple (not soup for once because it’s too darn hot).

I never thought I could get THAT lazy, but I suppose this is a lesson in never underestimating how much your mind and body will find a way to avoid something, even if that voice is screaming at you to do something good for yourself.

But nope, a lovely morning with morning pages, some iced coffee, and then a ton of headaches as it got hotter and hotter outside.

I’m just mad because I’ve gotta work every day this coming week and I got squat done today. As the day got cloudier, I did manage to pick up broken bricks in the yard. That part didn’t bother me so much, but many of the weeds are as tall as me and I’d hoped to mow a bit. I’ll have to pencil that in for tomorrow night, as long as it doesn’t rain and screw things up.

Then again, scissors will suffice for a quick solution. I did say they were big–easy to find then.

Now I have to plan the week–and give myself extra time. I know I’ll be asked to stay later some days or come a bit earlier on others if needed…so I might as well figure the best time to get up in the morning so I can get the dogs out and those pages going strong.

2 thoughts on “Waste of a Hot Sunday… a little of this and a lot of nothing.”