It’s rather tricky coming to a graphic novel after you’ve already seen the film version dozens of times, but I’m intrigued by this series and FINALLY have the whole thing. The books are hefty and pricey (hell, there’s 2,000+ pages over 6 volumes), but after saving and using my coupons wisely, I finally got the whole series of graphic novels.

And I had to take a break from the Bible and read something that was blatant about it’s violence and themes for a while, but that’s another story.

I will do my best to evaluate the manga on it’s own merits without bringing in the cult classic anime film (except to say that the film says the events take place in 2019 as Tokyo’s preparing for the 2020 Olympics–which is why I chose to review this series this year– but the manga takes place in 2030).

Anyhoo, Akira is generally a sci-fi mystery with tons of violence and action (definitely not for pre-teens). The mystery itself revolves around the world of Neo Tokyo, 38 years after World War III, which began due to some event known as “Akira.” This is the catalyst for everything that happens, the reason for the relationships and side plots that develop as time goes on.

And it’s one helluva mystery. You don’t get too far into it in this volume, but cheer up because you’ve got 5 more to learn from.

There are tons of characters. The main one readers will follow are Tetsuo and Kaneda, juvenile delinquents in a bike gang who end up on opposing sides. Kaneda’s the popular one and Tetsuo his longtime friend who ends up in an accident trying to avoid a kid in the road. The kid actually looks like an old man, Takashi, and he’d escaped a government testing site. Tetsuo is taken to the hospital where they find he’s got some mental abilities that are emerging. Experimentation ensues and Tetsuo develops powers to rival his worsening attitude about his situation. 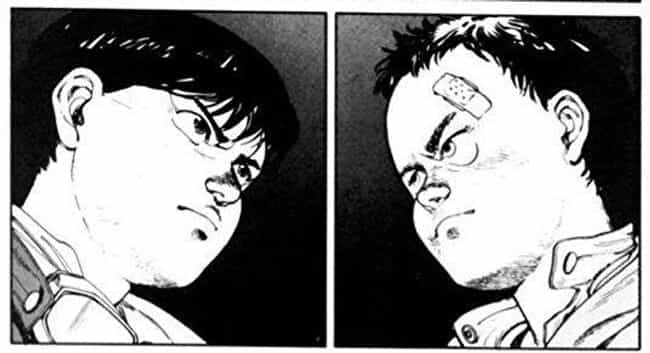 The Colonel is devoted to keeping Tokyo and the world at large safe, and wants to make sure they can harness the power that would prevent an Akira happening again. He works with the experimental “old-children” and doctors over them, trying to learn the secrets of the scientists before the war began.

And then there’s the resistance against the government and the military authority, represented by Ryu and Kei, who want to help those in the facility and learn about Akira themselves. Kaneda gets the hots for Kei and ends up getting pulled into the resistance and may have to kill his former friend.

There’s a lot to introduce in this first volume, and definitely a lot going on. It read it slower than I thought I would because things seemed to jump around a bit, but you get the feeling for the intense stakes involved, and there’s some mystery preserved. The somewhat chaotic beginning does calm down a bit and give you some basic plot to work with. You really want to understand what happened and what the players are hoping to accomplish.

When I get done with this series, I can already tell I’m going to find more works by Katsuhiro Otomo and see what he’s got.

The images are fantastic and have so much detail in them. I don’t see any laziness in the artistry at all, and each panel communicates, even the ones that have no words or characters. They help establish the place Neo Tokyo is, a place that’s on the decline even after the years of rebuilding.

One thing I’m a bit confused about is the early relationship between Kaneda and Tetsuo and why it soured so quickly in the scheme of things, in the early pages. Perhaps the next few volumes will elaborate on this, but I’ll definitely re-read it again.

This one’s a keeper. Can’t wait to get to volume 2.