This came out of the Ether when I remembered the first time I tried to truly study the Bible on my own. I’m almost done with my illustrated children’s Bible (might as well start with the cliffs notes version) and then I’m going to compare and contrast the wording in my original KJV Bible and the NIV I just got last month to make sure I understand.

Trying to study the KJV before learning my Shakespeare–and having those dictionaries handy–probably didn’t do me any favors.

As of this moment, I don’t consider myself religious, Christian, pseudo-Christian, Agnostic, Atheist, or any of the typical labels I’ve heard. For one thing, there’s some controversy and confusion about the labels and how far one way or another a person leans.

If I were to label myself along the lines of belief or non-belief, I am comfortable with “Questioning.” I am pretty natural about that. I’ve always wanted to know more and keep on going, even if the assignment was to just stop at a certain point, or if it just doesn’t feel like enough.

Seriously, I drove my algebra teachers nuts because we might stop at step 3, but I’d want to keep going. We compromised when I went back and circled or highlighted the answer they wanted… I just wanted to know more (especially since math and I haven’t gotten along too well; I’m just not all that good at it).

I remember when I wasn’t even going to church, but it was always on the TV and it was shortly after Tropical Storm Allison came through and drenched Houston in 2001. I remember that because our house flooded three times in four days and we spent most of the summer sleeping in a camper my stepdad’s friend lent us while we did most everything else on our wrecked property. I was living with mom then and had just graduated high school in May.

I don’t know why I started reading the Bible that summer–maybe there was something on TV that got me thinking about it, or it was boredom because I didn’t have a lot of books yet (yes, there was a time when I had very few books of my own, amazingly enough).

I don’t believe it was a crisis moment, as if I was whining “why do bad things happen to good people?” or any of those other questions that come up. I think most of it was boredom, and wanting to understand something, or maybe because I was stuck at home with mom and sermons on TV on my off days, it put the thought into my head.

And because I needed a place to sit and read–and one that was cool–then I figured I should take advantage of the camper on occasion and study the Bible.

Well…I got some notepads and pens and started to get to work (I’ve since thrown out those original notebooks with my questions and notes–guess I have an excuse to start over again). I don’t remember how long I kept at it, but before I’d even gotten partway through Genesis, I had page after page of questions, references (I have a 1972 Reference Edition Bible I got when I was 8 years old from our last church), and little maps I’d drawn to get my bearings about what the book was telling me.

Bear in mind, this is when I was 18, and LONG before I’d self-educated in the sciences and geology and geography. And I hadn’t started college yet and really learned how to do more than absorb what I was learning.

Well, sometime around the beginning, I suppose I was writing too many notes and mom noticed that I was in the early Old Testament. She told me that if I wanted to understand it better, I needed to skip the Old and start with the New first, then go back if I wanted to.

I gave it a shot for probably a week. I was partway through Mark (if I remember my notes) before I tried to go back to the Old.

I don’t remember how long I kept it up, but I don’t think it was for too much longer. Certainly not past the Pentateuch, where things in the Old Testament get beyond the stories and really get into the laws and whatnot, and all the really controversial stuff that makes women like me cringe just to think about.

All I know is my interest in pursuing it petered out. Maybe we finally got our new place and I was too busy getting my crap together to move in, but I don’t think I picked it up again.

What started my decline was partially what mom said about skipping. I figured I was messing up my own mind–in mom’s thought–by tackling the Bible as a historical document. The thing is, that’s exactly what I was doing. I remember that much, and it didn’t make much sense for me to skip the first part and jump to the second part.

I suppose I was destined to become a historian, because I was itching to go back to the Old and keep reading the whole time I tried to take in the New.

I was not studying the Bible to understand what God wanted from us pesky mortals on this planet, nor to get the gist of what Jesus commanded from us. No, I studied to grasp the historical significance of the work, and to see how much was early human history vs. stories just handed down.

Yeah, I’ve felt like River at one point or another…

That’s what I think made mom nervous, and I’m sure that’s the best way I can describe her. Nervous that I was questioning Jesus too much and wouldn’t believe in God. It was too long ago for me to remember exactly what it was, but the more I think about it, the more I remember that she didn’t like my approach.

But still–don’t look at it chronologically? You can’t say that to a historian! How else could I grasp the context? At least, that’s what I was thinking. There doesn’t seem to be as much overlap of thought or continuity between the Old and New Testaments, and it’s amazing when I Googled about Christians skipping the old for the new testament, there are plenty of articles talking about why the Old isn’t relevant anymore, or why it shouldn’t be bothered with.

Hell, there are oodles of posts on the internet about where you should start reading the Bible if you’re new to it, and what you’re trying to get out of it (sigh).

Some might see the pursuit of Biblical truth the way I did it as a catalyst for me to lose my faith. That started when I saw King James Version on the cover as a kid and went “wait a minute, if this is all true, then why is this a version?” I think that questioning really gained momentum when I saw Inherit the Wind (still one of my favorite movies of all time–and I think I’ll watch it tonight). I don’t remember my Pentecostal teachings at that church I went to as a five year old, but I do remember some of what I learned at the non-denominational Protestant church. Other than being generally evangelical, I don’t recall any teachings about the Earth being only 6000 years old, or that dinosaurs were on the ark, or anything like that.

I was 12 or 13 the first time I really remember hearing about creationism (though I didn’t know the term). My dad’s sister showed me a preacher’s video lecture. The preacher translated some words to mean great lizards or dinosaurs and concluded with scripture that dinosaurs and man existed at the same time. The only intelligent thought I had about that boiled down to “ohhh-kkay???” and I left it at that. But I thought it was funny more than anything, like somebody grasping at straws.

I had no idea that many Christian adults took it seriously.

Watching Inherit the Wind 4 years later really brought it home. I saw it in debate class, because it was a fantastic example of argument and debate, evidence and persuasion (still is). But when I got the chance, I rented it and watched it again and again, because I wanted to get the biblical argument between the characters. 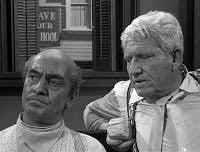 And when I think about arguments about how true the Bible is and how it shouldn’t be questioned because of how holy it is, that it’s absolute truth, I can’t help but remember what Henry Drummond said to Brady toward the end of Brady’s testimony:

DRUMMOND: That’s not true and you know it. The Bible is a book. It’s a good book. But it is not the only book.

I love that moment.

And yes, I’ve been made aware since that the play the movie was based on was really anti-McCarthy and the point was a person’s right to think and believe differently…but how the parallels just fit into place still blows me away.

So, I’m tackling the Bible again on multiple levels, spiritually and historically. I’m doubtful that re-reading the Bible will fill me with the spirit like when I was a child (or what I was told was the spirit–let’s just say I’ve read enough on mass hypnosis and televangelism to be skeptical). I’m doing it on my own with maybe a little shout out to the Ether now and again because I’ve had everybody in my life throwing Bible quotes at me or trying to get me to see things their way without letting me think for myself.

I have to tackle it for me and no one else. I’ve had mixed feelings about faith most of my life because of the people in it.

So why not read for myself? I’m ready to give it a shot.

Because this is where listening to others instead of checking it out for myself has always gotten me. No thanks, Ignorance is an itch I need to scratch, not bliss.

2 thoughts on “I Was Told to Skip the Old Testament & Start With The New… You Can’t Say That To a Historian!”