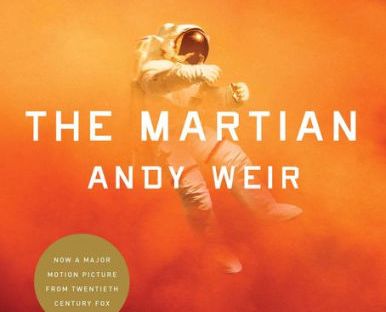 This is a science fiction book that would fit well with people who usually can’t stand science fiction (or think they can’t). That’s because at heart, it’s a story of survival in the most dire circumstances. I can’t imagine being stranded on another planet, with the nearest humans a million miles away (and only going further).

Thankfully, I don’t really have to. Andy Weir gives a helluva head start with this book, The Martian.

And no, I haven’t seen the movie yet. Bought it for dad, but haven’t watched it yet. Wanted to read the book again first.

Anyhoo, The Martian‘s hero is Mark Watney, a botanist first and engineer on the third Mars mission, the first to step on its surface. Unfortunately, on the sixth Sol (or Mars Day), a storm wreaks havoc and the astronauts have to leave the planet’s surface. Mark ends up tossed about and left behind, presumed dead.

And that’s just the beginning.

Actually, his beginning sentence is one of the best ones I’ve ever read in a book, and made me want to read more and laugh at the same time.

Honestly, read it–it’s perfect for the situation! I won’t spoil it for you here.

Mark has to figure out how to patch up his damaged suit and utilize the equipment around him–damaged and otherwise–in order to regain contact with Earth and his crewmates who are heading home. The next several hundred pages go by rather quick, even with all the technical writing that might make some eyes glaze over. Still, I think the fact that the technology and the problems to face are plausible in the near future make this probably the most dire and incredible survival story.

Mark is a good narrator, though he might be a bit nuts with nobody but his data log and potatoes to talk to in between communications with Earth. He does repeat himself quite a bit, and ends up in tons of danger several times over, but I’ve certainly read worse “get in and out of trouble” narratives the past few years.

Reminds me of what the Lovell character said about the simulator in Apollo 13: “That’s three hours of boredom followed by seven seconds of sheer terror.”

But I like Mark because he’s trying to keep positive and (thankfully) doesn’t delve into melodrama. His sense of humor and sarcasm are helpful. He’s also not perfect and makes quite a few mistakes along the way, which would make sense considering where he is and all the things on his mind. Something’s bound to get missed.

All in all, you’re reminded in every moment that while things might be calm in moments, the poor guy’s stuck on a planet where the air itself is out to kill him and he can’t do anything outside the HAB without an EVA suit or rover.

I think it’s the best fictional survival story I’ve read so far, and it makes me wonder how I’d deal with the situation, or how anyone would deal with it when Mars exploration opens up…or any other planet.

When I get these moving boxes cleared, I’ll put the movie in.

One thought on “The Martian, by Andy Weir”