That line from “The Night Before Christmas” has always bothered me, because I have to wonder what the heck these kids are visualizing in their sleep.

I looked up a picture of “sugar plums” and this is the first thing I saw: 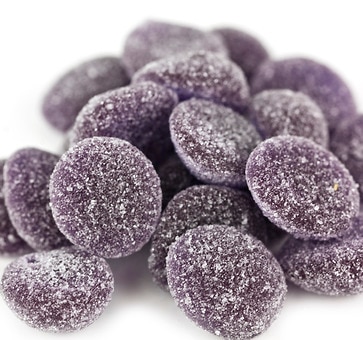 I’m sure they looked different than these snow-covered grapes or whatever back in the day, but how?

And I guess the “sugar plums” worked out for the rhythm of the poem and all, but I’m sure there were better candies and treats to dream about for Christmas day.

Real peppermint sticks to dip in my coffee or hot chocolate (drool).

I find it funny when I see images showing the things dancing in kids heads. You have the spiral lollipops, candy canes, jelly beans, whatever. But I only saw these white sprinkled purple turds in a few images.

What I really find funny is it took a few centuries for the “sugar plums” to actually contain plums!

This article from thedailymeal.com has a good overarching history of the sugar plum.

Which begs the question: if there was nothing resembling a “plum” in the recipe, why call it a plum, sugared or otherwise?

The most common answer: it looked like a sugar-covered plum when all was said and done.

I think it’s funny how this particular treat has seemingly done a radical shift, the opposite of a recipe like meatloaf (which generally starts as ground beef and then evolves to include ground turkey or chicken or vegetables in the end). No wonder there are thousands of meatloaf recipes.

This recipe, though, had to take a thousand turns from no-plums to plums and/or other dried fruits in a ball form with other stuff. Weird. I think it’s funny, but at least it’s trying to live up to its namesake. I find it funny that they just named it a sugar plum because it was small and plum shaped.

Really. If they made smaller ones, would they have called them “sugar grapes?”

Guess that doesn’t rhyme as well, or roll off the tongue as appealingly.

I’m so glad I’ve spent the past week getting my kitchen set up as best as possible, because now  I’ll be digging in my cookbooks to see if there’s a few recipes to play with. Heaven knows I like plum jelly well enough, so why not try a plum recipe?

Also, has anybody made or had “sugar plums” before? I’ve never ever seen them advertised or offered that I’m aware of.

I can’t believe that just occurred to me. Don’t think I’ve ever seen them in a party platter or anything.