Holidays and I have had a problematic relationship, in the sense that once I got past 12 years old, nobody seemed to give a damn anymore, anyway.

And it was just easier to go along with it. I didn’t feel like I was missing much, and I’ve only prepared Thanksgiving dinner once by myself. I believe I was 20 and it was just me and dad. Everything turned out okay, except for the giblet gravy (which I’d forgotten neither of us like particularly well anyway, so no big loss).

Other than food, Thanksgiving wasn’t a terribly big deal. We weren’t big on football (dad and I weren’t, but mom and my stepdad were another story), and the movies on were annoying or pointless.

We sure as hell weren’t leaving the house to go shopping, for crying out loud. 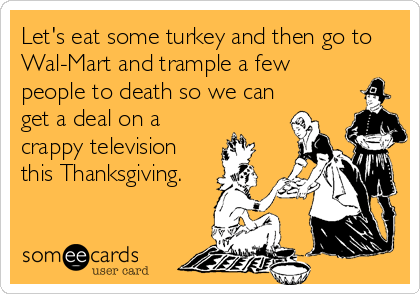 For most of a decade, dad and I were invited to other people’s homes for Thanksgiving. They always seemed to make enough food for an army, and/or they thought dad not bothering about Thanksgiving was appalling. Or maybe they figured it wasn’t fair to me that he was being such a humbug, I can’t figure out which. So, we’d go over and I’d try to stay out of the way or help out in turns while dad and the guys talked.

That’s pretty much the way Thanksgivings were for those years: the guys talk and go into food comas after eating at the table together. Football would be in the background til the Dallas game came on, nice and loud to distract and wrap up the evening right. And that was it.

Thanksgiving always felt strange to me, because other than eating and maybe helping clean up, I just didn’t have much to say, or it’d be in bits and pieces because we were focused on cleaning up. I spent most of those Thanksgivings outside walking around in the (mostly) pleasant air, playing with animals or talking with anybody bored of the TV, then back into the house.

Thanksgiving was when dad became–almost reluctantly–sociable. I suppose because he was such a homebody that was his time to shine and talk with adults.

And my time to shut up. At least, that’s what it got to feeling like the further back in time I went. Even when I hit my 30s, it’s like he was annoyed that I had to babble or put my two cents in around other people.

We hadn’t been out of the house for Thanksgiving for years. His best friend, Adam (not his real name) would try to get him to come up (before he was made to go back on a liquid diet because the food/liquid got into his lungs too easily). The last year we went to their house, not only did we reek of cigarettes coming back home, dad just managed some mashed potatoes.

It felt awkward going to an eating event and dad really couldn’t eat any of the food.

I felt awkward myself because the older I got, the more Adam would tease me for opening my mouth and talking at all (and dad would join in, of course). Adam’s wife and daughter didn’t say much while the guys were blustering and all, in and out of the house. It was kinda weird how we just stopped talking when they came in (or they did, it took me getting teased to suddenly shut up).

I’d already be in an annoyed state because of the cloud of cigarette smoke that wouldn’t leave me til I jumped in the shower at home and scrubbed and shampooed several times.

I don’t have enough clothes to burn willy nilly, but close enough.

Goddamn, I hate that smell.

And I hated feeling like an unnecessary appendage. When we got home, I felt like it was so awkward I shouldn’t have even gone, each damned year.

The year after that particular Thanksgiving, dad told me that we’d been invited again, and I said to him to go have a good time. I told him I wasn’t up for going, but Adam was his friend and he should go and hang out. I didn’t feel like it, though, and would go to Starbucks or something.

I think dad was looking for an excuse not to go up there, and used me for it. At that point, I didn’t care (but am still not sure how that worked out). I think he didn’t wanna drive up, or was feeling more tired and weak, or just didn’t wanna deal with the traffic.

So, for several years, my standing tradition has been to get the hell out of the house for a few hours and hang out at Starbucks, til it got too damned busy or loud, and then I’d go walk around or do something else.

Hell, I treated it so much like any other day that I can’t remember what I did. But I cut it off early before the pre-black Friday sales started and went home to play with the dog.

And that’s the conundrum this year. Quite a few people are offering invites for me to go over to their places this year, but I’m not up for it. For one thing, my hope was to have my house ready enough to go that I could get out my cookbooks (and my sweet potato pie recipe–a MUST) and make my first Thanksgiving dinner in my new house.

6 weeks of rain have made those plans impossible. It’s bright and sunny outside now, but the ground is covered in puddles around my house and especially my driveway…so another postponement’s in order. I want to put floats around that damned old-house that’s blocking my driveway and get it out of here, one way or another, at this point.

So, I’m crossing my fingers that I’ll have fun with Christmas dinner instead.

But it took me a bit to realize why I might just be so apathetic about Thanksgiving and not married to any plans…I guess it’s that Thanksgivings have been so meaningless in the past decade, in my experience. And this year doesn’t feel much different…except I’m still living in a back garage room with two dogs.

Something about being invited to a co-worker’s house, or one of dad’s friend’s houses, brings up that old, uncomfortable feeling that’s surrounded me with every holiday gathering: I’m an unnecessary appendage, and happen to be there because of my dad.

And true, he won’t be here this year, but that’s the point.

It feels too close to pity, like you have to have family this time of year or something. Spending Thanksgiving alone is just unthinkable, appalling, the same shocked reaction all over again.

But I’m an expert at being alone in a crowded room. I can’t remember the last time dad and I really felt like family, anyway, so I have little experience to compare all this to. We were like roommates more than family, and bad roommates toward the end.

The big difference is this year I have no dad and no house: just The Hairy Ones and a back room. And I haven’t said or texted a word to my mother since March. I’m thinking hard about calling–not texting–my stepdad to say hi and that I hoped things were going well. I don’t think I’m strong enough to deal with mom right now, and have no clue what to say, but he’s a great person and I don’t wanna disappear forever.

Still haven’t gotten the guts yet to call–working on it.

Not saying that this would be the same physical reaction I’d get calling mom, but it’s rather apropos for some reason.

I’m under the impression that those poor dogs are feeling cabin fever about as badly as I am. I have to leave the garage to get things done (like posting, work, checking e-mail, etc.), and that means they’re in that back room, sleeping and full of energy in shifts. I let them out for good chunks of time when the weather’s good and let them enjoy the sun and the time outside…but the past few weeks , that’s been hard to come by (stupid freaking rain).

My initial plan for Thanksgiving is a definite not-plan. I’m gonna take my time getting up and getting things done, letting them go outside and enjoy the morning til they’re sick of it.

Then I’m gonna get the leashes and some water, load us all up in the car, and just drive.

I haven’t figured out which direction yet, but if there are parks open, I think I’ll just take them out and let them smell and see new sights. They like the car, anyway, so that’s not a hassle. Sadly, I can’t trust one off the leash, so a dog park is out, but just being out of the house and letting them explore and play together a bit might be all we need.

A few hours away from that damned garage would be the best thing ever, for all of us.

And I could call ahead and get two turkey dinners from Denny’s to go. They could split one and I could eat the other (I know, people food for dogs is bad, but it’s Thanksgiving and I don’t see why they can’t enjoy it, too).

It’s just the logistics of making sure they share that’s the tough part.

I don’t think anything would be solved, but at least maybe some tension would ease. The house will still be incomplete, the shipwreck will still be blocking my driveway, the puddles will still try to suck my boots down and make my day miserable (wet socks are the worst, I swear).

And I would spend some time with the family I’ve got left, hairy and incomprehensible as they are at times.

The Hairy Ones and their mutual nemesis, the tug-rope. I’d better throw that in the car so they won’t rip up my seats, in case they were thinking about it.

It’s worth a shot. Of course, there are two days left for some curve ball to come in and change things up. Though I wouldn’t mind human interaction, The Hairy Ones need a holiday, too.

Dunno if I’m hoping for it or dreading it.

2 thoughts on “Thanksgiving, chock full of (a distinct lack of) plans this year…”