This is a question that’s bugged me my whole life along the Texas coast. Thankfully, we got through Rita (2005) and Ike (2008) okay where I’m at, many miles inland and several feet above sea level. We’ve never evacuated, and not because of the inability to afford it, scoffing at the storms, or bravado.

No–we haven’t gone because we didn’t know where we’d end up if we were caught in the traffic. And let’s just say Houston’s debacle with handling the Rita evacuation left a helluva mark on the mind. I’d decide to either leave early, or not bother at all. 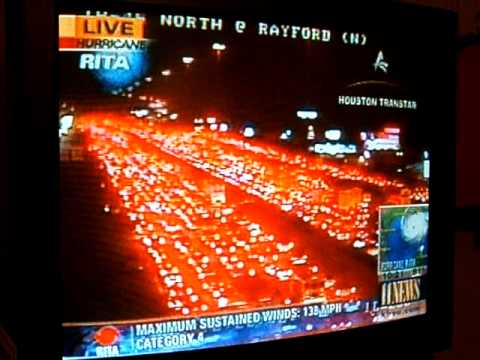 and even then, it didn’t seem to do much good.

There are so many tough stories with that one. I’ll always blame the media for making all of Houston forget that the city of Houston isn’t a soup bowl surrounded by three bodies of water like New Orleans was. All that coverage of Katrina flooding scared the hell out of everybody and made a bad situation worse.

What really bothered me about the evacuation is that instead of traffic being directed north and west, which made sense to me because it’d be out of most of the storm’s projected path, it was being directed more eastward.

If you leave early enough, before evacuation alerts and mandatory evacuation orders come down the line, you can go wherever the hell you want. Once the mandatory orders come in, then here come the cops and barricades to direct the flow of traffic into our concrete bottlenecks and good luck getting out of ’em.

The same thing happened with Hurricane Ike. My neighbors across the street evacuated with some family that came in from Galveston, and they were put on the road with everybody else. When they got to the main highway, the traffic was flowing to the east, gridlocked and everything.

This is where I get annoyed, because if they’d stayed home, they would’ve gotten some good rocking and wind and rain and all. Ike changed direction at the last moment, no direct hit on Houston, and did what most every hurricane does in this part of the country, curved north and east.

Eventually, most all hurricanes go north and east. I can only think of one that kept going northwest almost to Washington state, and a few have stayed further south and cut across Mexico and into the Pacific, but otherwise, once it starts to turn east, it keeps going in an easterly-northerly direction. So, my neighbor was in their camper, right smack in the middle of the worst winds. The traffic was so bad the evacuation had to stop and they pulled to the side of the road to hunker down where they were. They rocked out all night in that storm, but it was far worse for them (and their shrieking family members, but my neighbors had ear plugs to help them get THAT noise out).

Thankfully some trees didn’t fall over and crush their camper. That was my biggest worry.

I can’t understand why evac routes around here head eastward when the storm’s eventually going to curve that direction. Besides, they usually say the eastern side of the storm’s the most dangerous in this hemisphere, so why put people in the path. If you live in Houston, especially south and east of Houston, it’d make sense to me that traffic should be heading toward San Antonio or Austin, not Dallas or Louisiana.

Why the hell do they do that? That’s probably the main reason I wouldn’t try to evacuate.

This is a Baytown evacuation map. Baytown is right smack between Houston and Beaumont to the East. The problem is if you live on the east side of Houston, they want to evacuate you eastward. Sure, the arrows point north, but those aren’t major interstates, but small highways that can’t handle evacuation traffic too well, which is why so many end up stuck where they’re at and not fully evacuated. Make ’em go west and north and that would make more sense.