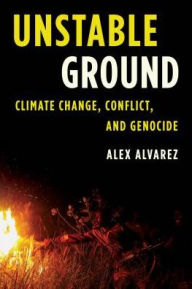 The title pretty well says what this book is about, and goes through the increasingly-combined issues of conflict, genocide, and climate change in spades in these 158 pages (not counting notes). This is NOT a book detailing how humans are creating climate change, but rather a book that explains how changes in communities, migration and resources in the past (and present) have contributed to violence and genocide.

Unstable Ground uses many examples of humans dealing with change and scarcity and some disastrous results that have ensued throughout history to make his point. He’s very quick to say when something is an example as opposed to linking it to climate change (shrewd, considering the amount of climate deniers out there ready to scoff at such links).

But think how much the problems will accelerate if we keep being idiots with our self-contained home.

I was curious when I picked this one up at the Holocaust Museum, and decided to give it a whirl. I’m glad I did, because it helped me make some connections that I hadn’t before, and made me realize how much we’re already seeing the effects of climate change at a human social level. Syria is a prime example, with the years of drought and violence that broke out, prompting millions to flee. We’re in the midst of a refugee crisis precipitated by many players in the Middle East vying for control.

And so many of us have forgotten why it started in the first place–four years of drought and death, and farmers moving into increasingly crowded cities that had nothing for them. This scenario’s only going to play itself out more and more as drought widens, climate keeps changing, sea levels rise, etc.

I’ve been reminded of this beginning more and more as other conflicts over scarce resources and ethnic differences have boiled over into genocide and other violence against a minority. Deep down, we’re all in pursuit of resources, and as resources get scarcer, genocides will occur more often.

There is so much in this book that I had a hard time putting it down, and I’ll be scouring the notes pages in the back for more info in the future (when I get dependable internet service again).

Unstable Ground is a book I’d recommend to anyone concerned about the state of humanity and our world, late high school to college students, geography nuts and anyone interested in the social sciences (as well as climatology).

One thought on “Unstable Ground: Climate Change, Conflict, and Genocide, by Alex Alvarez”