Maybe it’s my impatience at work, but my uncle had a random thought about cost-effectiveness, and put the flea in my aunt’s ear. She brought up something I’d been thinking about for 10 years or more…getting rid of this place and starting over with a better one.

There are three things this place has going for it: one is a roof roughly two years old, another is a central air conditioner about as old, and the floor plan’s not so shabby with this multi-family arrangement we’re working with.

But otherwise…this place is a piece of shit that’s falling apart…and it started long before dad got and stayed sick.

My aunt and I started actually writing down a list of things that need repairing this week. Halfway through, I was drained and demoralized just thinking about it. There are so many things dad either chose not to see or gave up on, or maybe he figured they didn’t matter because he knew his days are numbered.

The funny thing is he knew he was giving me this place, but I guess he just let himself go blind to it all…he had tunnel vision between the lazy chair and the bed, and that’s as far as it got.

Hell, if he never stepped in that old chihuahua piss or smelled it, what else did he miss?

The biggest problem with this place is it needs to be re-leveled, and I can’t remember the last time that happened, certainly not in the amount of time I’ve been back here (at least 12 years). I guess it was a cost-cutting thing and my stepmom was getting impatient, but dad wanted to pour a concrete slab so we didn’t have to worry about re-leveling the house all the time and subsidence issues, then move the house on it. But I guess my stepmom really wanted us officially moved in well before the school year started and wore him down.

We’ve both been regretting that decision since. I can look at the doorjamb to my office door and see where the wood’s separating and the little strips on the walls are coming apart. 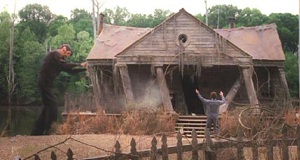 Only Karl would have to work from below, not the side, but you get the point… I like Big Fish

I also see spots of mold near the roof beam that I’ve been trying to get rid of for years.

Mold’s the other biggest worry. Probably five or six years ago I finally got through to dad, or he’d been thinking about it a while. My aunt and uncle were living in Austin at the time and every time he’d come back with a new gun to clean and play with at the shooting range.

I became “nagging daughter” and told him that I wish like hell instead of coming back with a new gun (because how much did THAT thing cost), he should put that money into a better recliner so he didn’t cut his circulation off on his legs, or fix the hole in the front of the house.

Hell, if I knew how to do it (safely) I’d freaking do it.

Eventually, let’s say after he got done with chemo and got his strength back, he finally got to fixing the front of the house. The problem is we had masonite siding (masonite + Southeast Texas = Catastrophuck). The water would splash off the deck and hit the house, eating away at the wall. We had spiky mold on the front of the house in that area, which would come and go in growth. I’d be saturating that section of the house with bleach, vinegar, anything I could think of to kill it and get it off the house without making a bigger hole and getting it inside.

It was making me nervous because my bedroom was just a few feet from that hole, and we’d watched too many episodes of House M.D. to NOT worry about mold issues.

Throw a some more black on there, and some spikes, and you got it about right.

But dad let it fester for years. He knew it was a problem, but didn’t do anything about it. I guess he was waiting til his friend could help so he didn’t have to get some contractors out, but grr…that wall was looking freaking scary, especially since it looked like it would go away and then just be there again later.

My issue is I don’t know how much internal damage was done thanks to that, and if it got in the walls, what the hell have I been at risk from or breathing in my sleep?

Where I pulled up the carpet under that area, the plywood’s stained black, and the windowsill is all warped from the moisture. I told dad that probably needed replacing, but he didn’t wanna deal with it.

Should’ve gone into architecture or working at a construction site, dammit–I’d be better off.

Anyway, those are just the doozies, the big ones that have been massive trouble, and probably caused most of the other issues. Now I gotta be concerned with:

–Replacing the deck: the thing’s over 20 years old and infested with termites. And since it’s parked right up against the house…gee, I wonder.

–Dad shorted out a few outlets with his power tools while working on the front of the house.

–Master bedroom and bathroom have a massive hole in the ceiling because of roof leakage a few years ago. Dad had to tear it out to find the leak (and get rid of the sagging panel).

–Refrigerator stopped making ice about 10 years ago, and it’s one of those annoyingly skinny side-by-sides instead of top-bottom models (you can’t stack pizza or organize well in those skinny freezers, dammit–thanks awful stepmom for THAT choice)

–Dishwasher hasn’t worked in 7 or 8 years.

–Kitchen overhead lighting is very dim. Something went wrong with the light fixtures or wiring over 10 years ago and if you’ve got lousy eyesight, it’s too damned dark, even with globe lights over the sink and breakfast bar.

–Missing several of those strips to cover the wallboard panel gaps.

–Reflective white wallboard is impossible to keep clean and will be costly (time and money) to paint over and make tolerable. It’s why my bedroom looks like I never left high school and have posters all over the place–it kills that intense brightness a bit.

–Spackle’s coming off the ceiling in patches, especially near the main beam.

–Will require termite and pest inspection. There are areas I can see under the place where I’m sure critters have gotten in and made nests. When I’m in the guest bathroom and it’s quiet at night, I can hear a skittering near the vent. I’ve caught mice more than a few times the past few years, so I know they’re nesting somewhere.

–Cabinets have areas where chemicals ate through the bottles (bleach, I’m looking at you) and leaked on the particle board shelves, leaving nice holes. Another hole I can’t figure out how it got there, but it’s impossible to use that cabinet. Damned kitchen.

–Air conditioning doesn’t reach Master Bedroom effectively. Something’s either blocking the vents or there’s some other problem…and dad was aware of that problem for more than a decade, but didn’t try to do anything about it. At least he had a fan in there, but still…

I’m sure if I sat here with my pen and paper I could come up with a dozen more items to put on there. All I know is if I can find a manufactured home where the floor plan (and price) are good enough that we can all have our privacy (and not have to break our backs), then I’m good for shopping for a new place.

I’d thought about that off and on, but had no idea about cost or anything. I’ve wanted to make this place a little more livable, but like dad, I guess I gave up. It’s hard when nobody tries to help you, so there’s no point.

But that’s the really big issue with this “becoming my own person” thing. A new place that would be mine would be a good start, and it’d be one of those things I moan and groan about every birthday that I could knock of the “I’ve never” list.

Home ownership. That’s one thing my aunt was telling me to think about as an option because she’s done lots of renovations and the list of things was making her look like a deer in headlights for a bit there. She and my uncle (and I) aren’t getting any younger, and my uncle works damned hard…too hard, sometimes.

The thing that sold me, and it was something I had to think about, was that I just grew to hate this house. When I said to my self “no way in hell am I living here forever,” it was mostly this piece of shit double-wide that’s falling apart all around me a little more each day that I didn’t want. I like the land, I like my neighbors, but it’s time to get a place I can make the way I want it.

I hate this house. Hate, hate, hate. All the things that needed doing and I couldn’t do them because I didn’t have the money or the authority to take charge and fix it.

Well, I don’t have that excuse any longer. The land’s paid off, so a new place right here where this one is now…that sounds good to me.

Today I’m going to browse manufactured homes with my aunt and uncle, and see what’s available or changeable. Something with just a little less square footage (this house was meant for many more people), but gives us our own rooms with the kitchen in the middle, like a multi family thing but in the same house.

If at all possible, I do want several rooms to myself: Bedroom, office, art and music room, and den. They’ve got huge furniture; they can do the master bedroom and living room thing while they’re here. When I’ve got too much crap in one space, I can’t get anything done, hence multiple smaller rooms…or if there’s a giant game room, that can be my library and office…drool.

Sheesh, I’m dreaming again. Wonder if they can put a window seat in for me, too.

Either way, I’ve forgotten what it’s like to have a day off and not be digging around dusty items or cleaning out rooms all day. This is a much needed break to stimulate my imagination a bit. I think we all need it, and if we find a new place I like, then awesome.

I just gotta remember it’s my decision in the end. But this place is crap, and constantly fixing it is not what I want to do. I can clean junk and rip carpet out plenty…but all this other stuff…it’ll take far more patience and know-how than I’ve got, and I don’t wanna spend over a year trying to get things just right.

I already sacrificed all my sitting furniture (except for grandma’s rickety rocking chair) to the gods of the burnpile and Goodwill…I don’t wanna be in a holding pattern forever! 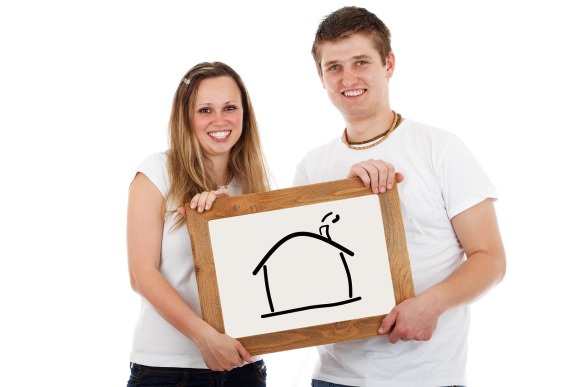 4 thoughts on “The Home Repair Files; or When to Chuck it All In and Go Shopping For a New Place…”