I blame this article about the Fender Jazzmaster from last week for getting me into this train of thought. It made me wonder that the hell a Jazzmaster was, and then about electric guitars in general.

I made a mistake last Saturday night, when I stopped thinking and went to ask those questions. More than that, I bought some books at my fave bookstore, around the corner from my music store, to help me out with my questions about electric guitars (yeah, I know, I know…I need to delete my internet store account so I quit spending).

However, I got a late start and by the time I got my books and left, the music store was closed. But I remembered there was a Guitar Center a few blocks away. I’d never been in there before, but I figured they were worth a shot and went over there.

And boy do I regret it. I think I have another toy store.

I was glad the name wasn’t just some holdover, and that they used to be mostly guitars and whatnot (the way Radio Shack still had the same name but barely sold anything even related to radios anymore, you know?). The place was freaking huge! A superstore for guitars and do-it-yourselfers to start their own band! I had just a little time to browse (and drool), but I did get some pointers about genre and what some of the terminology was about guitars.

Okay, I wasn’t quite as dramatic as Randall from Clerks here, but you get the point.

And now that I know what it’s got, I know I’ll be visiting and jotting things down for my wish list.

Though the more I think about my visit, the more I’m convinced I should burn my credit cards as a precaution. And I have to burn the words “store credit” out of my brain, at least until after income taxes next year.

The problem I realized when it came to thinking about getting an electric guitar is I have no idea what the hell I’m looking for. When reading online about great guitars or hearing conversations, it’s like listening to car people. I can’t tell the difference between the headlights on a ’67 or ’70 whatever-the-hell, and I’m just as lost when somebody starts talking about tremolos and pickups and single-coils.

At least one of the salesmen were nice enough and had a few minutes to give me some brief points about what parts were what, so I at least had that (the few diagrams I’ve found never printed well, dammit, and still didn’t tell me what it was all about, hence the reason I bought the books).

But more than that, when I told him what I’d want to play most (jazz and blues), he suggested I think about bands or players that had a sound I loved and wanted to emulate or understand better, and then he could help narrow down recommendations for what’s out there.

Because, for the newbie like me, what did I see? It’s not just looking for electric guitars. Do you want a Stratocaster, a Telecaster, a Jazzmaster, Mustang, Les Paul, Jaguar, etc.?

And they all look a little different. I can barely tell them apart because even when you look up “stratocasters” (like I did for way too long the past week when I got bored of re-reading my physics lessons for the kids), there’s several versions of THOSE, too.

What got me was I started thinking very very hard, and VERY seriously about what kind of guitar I wanted.

A few articles did help me out with that, I admit. This one’s probably the clearest one I’ve found, with videos to help you hear what many of these guitars are like. And the salesman mentioned that when you get playing with an electric, you gotta train your ears to pick up on what’s out of tune or what sounds you want to coax from the instrument.

As much as I want to play jazz and blues, I think I’ll end up going for (or at least seriously considering) a Fender Stratocaster. It can play blues really well (I’ve heard a few demonstrations) like it was made for it. But more than that, there’s someone’s playing that I’ve loved a good chunk of my life and I’d love to get that sound– 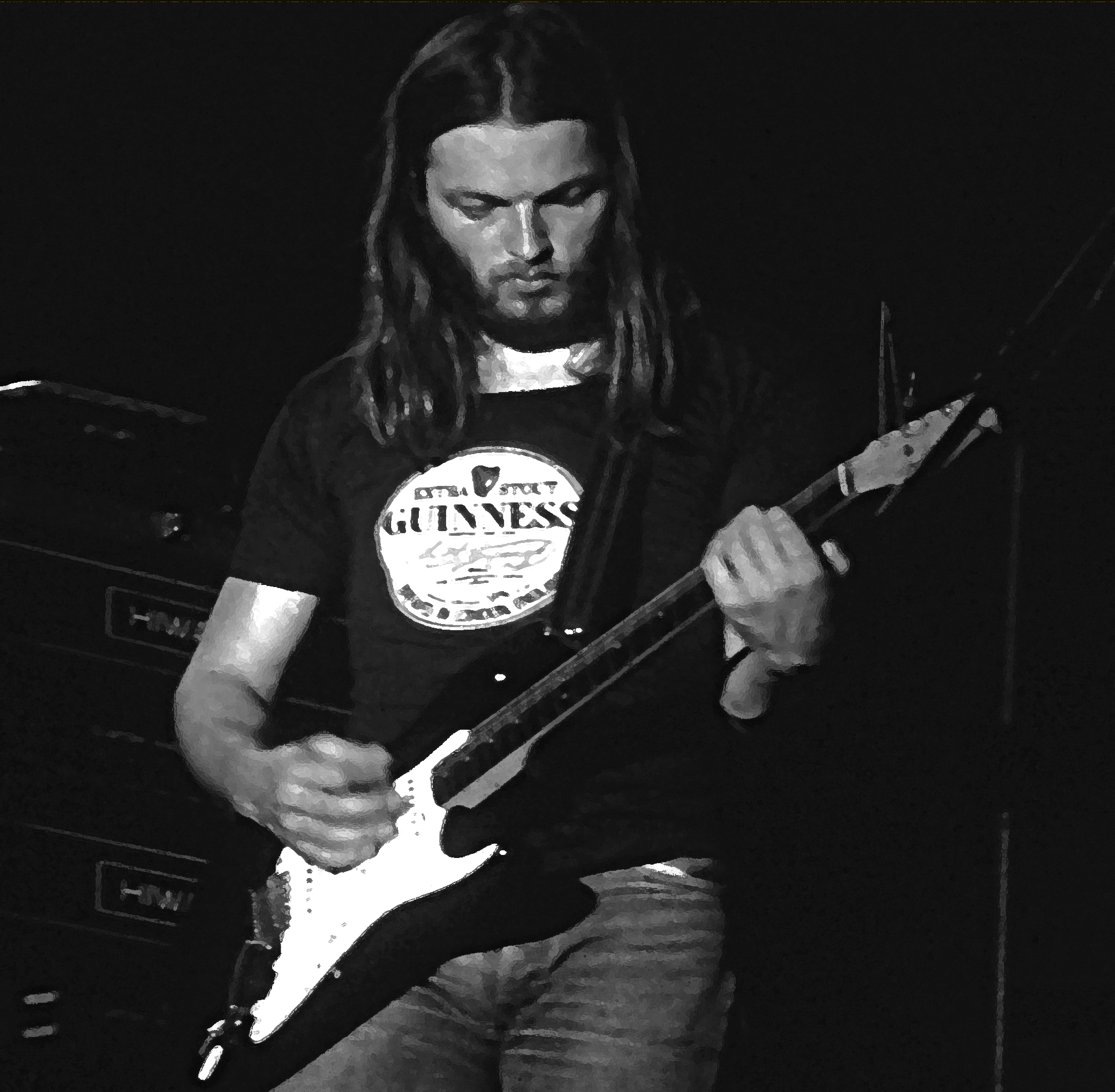 I love his playing, the sound. I know there’s lots of modifications he’s done to his guitars and all to get the precise sound he likes over the decades (that unique sound that screams Pink Floyd in only a handful of notes most of the time). I don’t want to copy it (and it’d be damned hard to do), but wow–it’s definitely an influential sound.

I’ve been a Pink Floyd fan since I was in diapers, and I’ll re-listen to the albums just to make sure I listen hard to the solo moments.

The first piano-guitar-vocals book I bought was Pink Floyd’s Darkside of the Moon. I’m itching to play it, and any Pink Floyd I can get my hands on. Of course, I’d practice with acoustic first, make sure I had the notes down and all.

That’s the thing–yes, I know it’ll be a while before I even get to practicing my acoustic with this plan of mine and all, but that’s why I’m so determined to wait to buy an electric. I’d always planned to go for an electric at some point, but I love the sound of acoustic and want to learn classical guitar, too.

Ugh, I need to win the lottery and just go to music lessons every day of my life from now on–I want to play…but it’s going to take small steps to get there (and get good).

Still, what’s tempting me so badly is I found online a not-terribly expensive Fender Stratocaster (at least it’s well under $1,000) that’s like the cooler-cousin of my blue acoustic. It would be neat to have a practically-matching electric guitar to go with my acoustic (and I hope it’s still an option when I finally go for it).

But more than the color and effect (I have to reign in that impulse), I gotta make sure it’s the right type of guitar for what I’m looking for. I don’t want to get a roomful of guitars because that’s a hell of an expense (and where would I put them–my books take up all my other space!).

So, my giddy impulses are going to keep prompting me to ask questions. I think I’ll save things to my wish list for a while and not step foot in the stores (and ask questions about the guitars) until I’m actually at the point where I’m actively practicing on my acoustic.

Oh, this is going to be an interesting endurance trial. At the very least, I’m promising myself not to even shop for a guitar–now–until income taxes are over and done with in early 2019. That’ll give me plenty of time to get a feel for the guitar (and maybe a few lessons under my belt if I can afford them, to make sure I don’t develop crappy habits).

Oh man, so much to learn.

But at least I’ll read those books and educate myself a bit (hee hee).

2 thoughts on “Way Out of My League: a newbie browses the world of electric guitars”