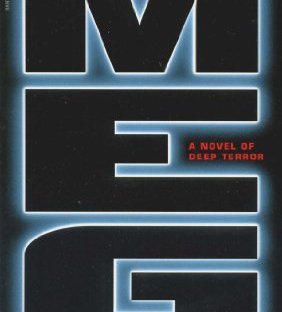 Those who loved the book Jaws probably hate the success of this book (at least, that’s what some Goodreads reviewers seem to think when the word “Jaws” is written).

I wrote my own review of Jaws (the book) a year ago–feel free to read it right here. Anyhoo–

Meg is the story of Dr. Jonas Taylor, who used to be a deep sea sub diver in the U.S. Navy, but an accident caused him to give it up. He thought he saw something in Marianas Trench that couldn’t exist (take a wild guess what) and ended up getting a few guys killed in his panic. So, he became a paleontologist and spent the next decade trying to prove or disprove the existence of the Megalodon, the most dangerous predator in the history of Earth’s oceans.

He’s approached at one of his lectures by the daughter of an old friend, a researcher and scientist named Tanaka, who is having problems with seismic equipment he put down in the trench. After a few chapters, Jonas gets roped into going and confronting his fears of the trench.

Unfortunately, it doesn’t work out so well. There is a Megalodon, and it’s domain’s been disturbed, and it makes it out of the heat of the trench and through the freezing water column (in an interesting way I won’t dare spoil), to the warmer waters close to the surface…and lots and lots of food sources.

And she’s pregnant to boot.

I probably read this book half a dozen times before, and figured I’d read it again since the movie’s coming out in a few weeks. I thought it was intense, interesting, and I just couldn’t stop reading it.

I had the same feeling last night, when I finished it around 1 am, but I’m holding back on my gushing praise this time around. Maybe it’s my age, or the pop culture surrounding sharks the past few years, but something felt off this time.

Don’t get me wrong–there’s plenty of action, death, violence, and some interesting scientific descriptions and theories I’d love to do more research on (yeah, I know, anything that leads to more research is a good thing…nerd).

Megalodon & T-Rex comparison. The first chapter introduces us to both these guys. I’ll give Alten props–interesting scene to think about, and quite descriptive…

Some of the action in Meg, the ideas and planning made me go “ooohhkaaayyy?” though (a nuclear submarine vs. the Meg–really? Can you even use torpedoes to try and blow up a fish? Damn it, why was Mythbusters cancelled when we could use ’em now?!), and I really had to wonder about the constant feeding frenzy going on with this shark–I mean, on practically every page since it was introduced, it was actively hunting or killing something. I wondered how many humans or whales could feed the damned thing in the end.

But I also started thinking of this book as a great “what if?”, especially when it came to preservation and the food chain. In the book, the Meg’s presence in the surface waters practically sends an alarm bell to species all over the Pacific Ocean. As the Meg swims and kills these slower whales and other animals, you know it’s going to create an ecological disaster just by its presence.

Makes me wonder how bad it would get for the food chain for the new king/queen of the sea to so drastically and suddenly rise to the top, without a chance for adaptation or evolution.

And whether it would be worth preserving the Megalodon’s life, or if killing it, would be better.

I agree that there’s quite a bit of info-dumping going on in this book, yet it’s one of the few books where I don’t mind it so much. Those suppositions about preservation and the food chain had great info to work with.

My biggest beefs with this book include timing, characterization and some of the interplay between the characters.

I also think this is where the movie might actually improve the story!

I didn’t get a clear grasp of how much time had elapsed between events. There’s so much movement and motion I wondered when characters got to sleep. I know at one point they lost contact with the Meg for a time, but can’t remember if it was a few days or a few weeks since they last saw it. Things seemed to happen very quickly, and a bit easily…but then again, that’s fiction for you.

The characters are either misunderstood good-guys or vicious… there’s very little in between. I liked some of the scenes and character moments, but otherwise it’s a very misogynistic atmosphere. There’s only two women as primary characters, and they’re disappointing.

Terry, Masao Tanaka’s daughter, starts off constantly pissy (but since every man around her is old-fashioned and thinks women shouldn’t be doing what she trained to do, I can’t blame her). She gets a little nicer as time goes on, but other than wanting to prove herself and do what Jonas does, she really doesn’t get much to do. Feels like a waste of character, really.

Then there’s Maggie, Jonas’ wife, who’s a t.v. reporter and a social-climbing skank to the n-th degree. She hates him so much that she’s cheating on him with a friend and trying to smear his reputation as payback for all the money they lost when he stopped diving. Makes me wonder why they married in the first place, or why he didn’t divorce her sooner.

And though Jonas is supposed to be our hero, and is in a lot of ways, he starts off as the humiliated and ridiculed, vindicated, and then he gets to have his face time with the Meg in some odd ways. Several of them. Considering how many human beings don’t seem to return from one encounter with the Meg, Jonas must have some weird supernatural protection going on to have multiple face-offs and still live.

And the way Jonas became the hero in the end, let’s just say my appreciation for this book went down a bit because I felt like I was reading an alternative ending choice or novelization of Sharknado for a few minutes there.

Ugh, only thing worse than that made-while-drunk-drivel would be a novelization of it. I’ve already asked why Sharknado exists, so I’ll move along.

A few characters I liked, like Mac, Jonas’ friend and chopper pilot, and Masao Tanaka as a caring voice of reason. Others were so stubbornly ridiculous that when they acted, I really wanted to yell out how stupid they were before they did the dumb thing they were going to do.

So much carnage, so many shark scenes, so much of everything…too much at times. But enjoyable in many respects. Like the book version of popcorn B-movie fodder with a little interesting oceanography thrown in. There’s a series of these books the past few years, but I probably won’t read them.

Meg, however, is worth a read, at least once, if only to compare it to the movie.

If the film version improves on characterization (and gets rid of a couple side-stories), I’ll probably enjoy the hell out of it.

**ADDENDUM: Apparently, what’s on store shelves now is the revised edition, which includes “Meg: Origins.” So the original version I just reviewed (the one dad got for me a decade ago) is getting harder to find. Just giving you a heads up.

One thought on “Meg: A Novel of Deep Terror, by Steve Alten”