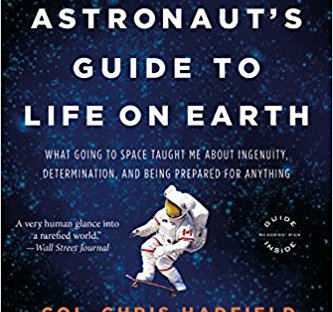 Well, now I’m back to my Canadian author after the holiday. Chris Hadfield is probably the best known astronaut of the 21st century so far, and no wonder when you read this book and see what all he got involved in.

I haven’t had the chance to read many astronaut biographies or autobios, but this one sure gave me a lot of info I’d never thought about regarding space flight. The last one I read when I was a kid: it was Jim Lovell’s Lost Moon about the Apollo 13 flight (I’d just seen the movie and wanted to know more, of course). I have other space books; just haven’t read them yet. I started with this one because Chris Hadfield has a Masterclass and I wanted to get a grasp of the man and his style before I started it.

I think I’ll be impressed–he reads like he has the heart of a teacher.

An Astronaut’s Guide to Life on Earth is part astronaut autobiography, part life-lessons. I think there’s a lot of little wisdom in this book that fits anyone, regardless of your career goals. Hadfield has much to say on subjects like teamwork, family, attitude, change, certainty, etc.

Chris Hadfield watched the moon landing in 1969 when he was just a kid, and since that date wanted to be an astronaut. However, that was an idea he’d have to keep quiet a while because he is Canadian and astronauts were either American or Russian. Regardless, he kept space flight as his goal, and worked toward it for the rest of his life. His stories about astronauts and cosmonauts he worked with are fun to read, and shows that even when things were super serious, in down times, these guys could be pretty interesting. I laughed out loud imagining what he described about his early days in Russia, and some of the things he learned about “team bonding” and cultural differences.

An Astronaut’s Guide to Life on Earth is organized chronologically at first, but gets organized more thematically in the second part. Since he’s been in so many planes and several space flights, sometimes I found myself a bit confused in reading what’s going on and putting it in context. But I was also absorbed in what he was talking about so much and what he learned that it didn’t matter–it still stuck with me.

I’m not saying he goes off on tangents all the time, but it’s more he starts off chronological, gets to the point of the chapter he wanted to make (beyond the “early history” chapters), and then finds other events to back it up and elaborate on the point, and then on to the next chapter. There’s a lot in here about his family, and especially his very supportive wife, Helene, and what she thought and did as things went along in their marriage. If this book gives you anything, it’s definitely some perspective on what it’s like to be the family of an astronaut, and how the support network’s developed and changed over the years for the better. His gratitude for all that entails shines on the pages in those sections. This is a pretty humble guy–no wonder I just kept on reading and didn’t want to stop. I’d like to meet him.

I think this is a great resource for anybody, and the book definitely reflects the subheading: “what going to space taught me about ingenuity, determination, and being prepared for anything.”

Like Ben Franklin’s autobio that I just read, there’s a lot of wisdom in this.

Maybe I should read more autobiographies…haven’t really done that much, but I always get an “aha!” moment or two. Hmmm…

Anyhoo, not an overly complicated text (unless you’re not up on NASA jargon, in which case he helps out a lot), and some technical stuff. If you’re curious about the astronaut life, how to create opportunities and see what’s in front of you, a space nerd, a tech nerd, a scientist or philosopher–or just an Average Joe wondering about that Canadian guy on the ISS who did the cover of David Bowie’s Space Oddity you saw on YouTube, well…open up An Astronaut’s Guide to Life on Earth.

I’ll be keeping this one.

One thought on “An Astronaut’s Guide to Life on Earth, by Col. Chris Hadfield”