Before I left work today, I decided to go full-throttle into looking for full-time jobs that would help me improve my skills and build my self-esteem (and be workable in the sense that I could plan around them far easier).

I have this odd relationship with work. I’m growing to despise my job, though I know it could hurt me or others in the long run if I just up and quit.

I finally got to the point where I’m tired. Tired of fighting myself and trying to fit this square peg into a round hole. Tired of being “indispensable,” stretched and all-too accommodating while others are being trained and vetted to fill my job in some way. (Sure, it’s a great thing to have more help in case somebody’s sick and all, but how long will it be before I’m back to getting nearly no hours, or sporadic ones that could change in a moment?)

Besides, I have to get ahead of this fear I have of being without a job. I can’t afford to be without a job. And if things continue the way they are in my “bigger paycheck” job, I’ll either get written up, chastised to kingdom come, or I’ll just freaking quit.

Begging the question: how do you get over fear of losing your job? I don’t know if I’ll be pushed out the door or run out myself…but I don’t want to be in a panic over it when the day comes.

I’ve been having to deal with crazy directives and changes regarding work and customer service. In essence, I’ve been trained to work for two different employers at the same desk…but only one is paying me. And their word is law.

There’s the company I’m a receptionist for, and the contracted service we provide to give us hours and pay the rent. That contract service doesn’t have it’s own local phone number, so people who wanna reach us will use the primary company’s number to try and get to me (again, being vague for privacy).

That “law” comes into conflict with what I actually do and how many customers I interact with. The mornings are my busiest time, and probably 95% of the people I deal with are there for the contract service. And if there’s a problem, they have to call the national customer service line.

But when there’s a technical issue with the contract service, it takes a helluva lot of time and effort to clear up over the phone. And then there’s making sure the customer’s taken care of in the end–or at least, that’s what I try to do.

That means a bit of a power struggle with me in the middle.

And there have been complaints about how long I take on things. Our company’s owners don’t like that extra bit of customer service. The owners think it “ties up the phone lines too long” and we need to just make those customers call the contract service’s support line to get what they need.

And that pisses me off.

I don’t like wasting my own gas, let alone somebody else’s. I hate when someone has to leave and make a special trip to take care of something before returning because I wasn’t allowed to give them more info they needed. Info that would’ve taken 30 seconds to dispense.

Now, I’m NOT trying to set myself up here as the Mother Theresa of Customer Service or anything like that. There are plenty of times when customers annoy me or piss me off, and I’ll do what I can within reason to get them on their way and out of my hair. But dealing with customers is part of the job. I thought that meant helping them out so they don’t complain or come back over and over, getting more pissed off each time. Maybe it’s too much to expect, but I thought customer service meant providing a service.

Am I confused here? 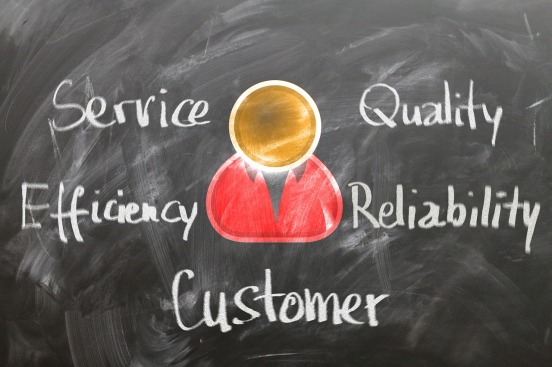 I’m not a genius, but I thought this stuff was Business 101… because if you don’t deal well with customers, you eventually don’t HAVE customers…right?

I was chastised today because I was trying to wrap up a difficulty and call one of those customers. We had a bad technical glitch that messed with his account and I was trying to get in touch with tech support to reverse what happened so I could process his appointment cleanly. It was aggravating because the two people I talked to didn’t understand what the hell I was talking about and gave me some really insane advice, and I had to tell the customer to try us back later. That wasted 30 minutes of our lives.

It made me mad that he had to come back another time, but I told him I’d keep trying to get things right and I had his phone number, so I could let him know when everything was cleared up. That made him feel better and he left. I tackled the rest of my appointments as fast as I could.

Well, I waited til I got my appointments caught up, then tried to call again. Luckily, I got transferred pretty quickly to somebody who knew what I was talking about, and they cleared it up in 10 minutes.

It took two minutes to lift the load off both our shoulders and it even made him laugh in relief.

That’s what led to the chastisement.

Apparently, I’m not supposed to call clients to let them know when things are resolved–they have to call customer service themselves. And I’d been warned about it before. Even my immediate boss thought it was dumb, but the owners listen to just about every phone call now and come next conference call, they’re probably gonna bitch out my bosses over it.

That made me mad, because I was like “wait, so this person who was stuck in there a good hour, late to work, and out a big chunk of money til we could get this fixed, was just supposed to twiddle his thumbs and hope for a refund? How was he supposed to solve the problem–he didn’t know what the problem WAS!”

I just got a shrug and a reminder that they are supposed to call customer service from now on.

It occurred to me that if I get called out by management over this issue, I won’t give a damn. If I get called out for taking too long with a concerned customer, or being a decent fucking human being and letting someone know that a problem’s resolved, then dammit–I’m going to do that.

And I have a feeling if that’s too much for them, I’ll just resign. I don’t care.

We’ve all experienced shitty customer service, and though I make plenty of mistakes as I go along, I don’t think it’s funny to make someone’s life a little more hellish. If it’s a question I can answer myself in 30 seconds on the phone, I’d rather take the time to answer the question, and maybe give a little more to see they have their bases covered. So, that makes it a 1 minute phone call.

I just don’t get the issue here. And it’s one of those things if they insist on, I’ll leave the damned job. I can’t stick with that, because that’s one thing my bosses don’t have to deal with as much. I am on the front lines. I am the face everybody sees when they come in the door.

And I’m gonna be the one getting screamed at. I’d rather help somebody get the info they need AND a card for customer service, if it comes to that, not “here’s a card, call the number” and shut the window in their face.

Can everybody say “dick move”? I’m sure thinking it.

I’ve seen others basically do that, and it jolts me. I feel embarrassed having seen it and swore I wouldn’t do anything like that if I could help it.

So I’ve spent the past few hours nursing a migraine while looking up job opportunities, hoping to have something lined up so I can go on my merry way in life just in case I get fired for being insubordinate.

I think I can live with myself if I’m fired because I refuse to be an asshole to people. Hell, that’s why I think one of my bosses likes me, anyway.

But if it’s not up to her, I gotta prepare myself for the day I am unceremoniously booted out…and get over that fear of being without a job. My income taxes sucked up my “emergency fund” and because of my lack of hours, it’s been slow going building them back up.

So, how do you get over the fear of being without a job? Has anybody else struggled with this and figured out the secret? I know things happen that we can’t control, especially with a job market like this one…was there anything that helped you get over this fear, because I’m tired of hanging onto jobs I don’t even like anymore with my fingernails when I should let myself move on to greener pastures a lot sooner!