My Copy: 057117891X (image from austinchronicle.com, differs from mine because I got a British copy)

I have to thank Werner Herzog for pointing this book in my direction, and it’s so worth it. You could apply the labels of autobiography, shooting diary, and how-to to this book and it’d all be accurate.

Rebel Without A Crew is created from Robert Rodriguez’ diaries regarding the shooting of his film El Mariachi, a movie which spawned the better known (to American mainstream audiences, anyway) Desperado with Antonio Banderas. Most fans of that movie that I’ve spoken to barely know what El Mariachi is (but now I REALLY want to see it). It goes from his early start in movie-making as a kid, to winning awards for some short films, and then working on this first feature-length film that he’s had in mind. A Texas boy, he went to Mexico to shoot in a small town and just about everybody had a part if they wanted it. 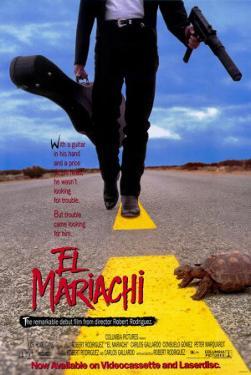 I love the story with the turtle in filming… and I love that they used the turtle on the poster!

But to get there, and keep the film low-budget, he had to basically sell his body for science to get some of the funds (that’s some interesting reading there), borrow materials and people, buy film rolls one at a time so as not to go over budget, shoot single takes and be incredibly flexible with time and other constraints.

Yes, the film was made for roughly $7K, but definitely didn’t look it. He also never thought Hollywood would come banging down his door, which is the funny thing: he intended this to be a Mexican movie, for the direct-to-video Mexican movie market, hence the reason for some of the choices he made dictatorially.

To think he did it mostly by himself, without a crew, and just his actors and some outdated taping methods that worked very well. When he gets to the Hollywood machine, and their attempts to get the picture meant for wide-release, it’s disheartening and hilarious at the same time to see this young director scratch his head and wonder how these big-wigs could make so many mistakes with so much more money than he had. Even with the Hollywood treatment, he takes on a lot of the improvements himself.

And the way people respond to him in the studios, then at the premieres, is enlightening and interesting–they all seem to be flabbergasted at how well this young man did, and it’s GREAT to read. I love how some of these Hollywood veterans are skeptical, but the studio people he works with the most just like the hell out of him and help him out with what he needs.

Rebel Without A Crew is a must-read for anybody who wants to be a filmmaker. Scratch that, anybody who is fiddling with a video camera or camera-phone, making their own videos, not even sure they’ll ever go to film school or Hollywood or anything.

He’s a lot like Werner Herzog in the sense that he believes if you have a need to tell a story and a camera, go freaking do it! Don’t let silly things like budget stop you.

I love this book.

I love, love, love this book. My jaw dropped a few times and I was getting rather giddy reading it. Wish I’d bumped into it when I was in high school, because I bet I would’ve scraped and saved for a video camera and tried to make movies with my friends.

But if wishes were fishes …and it’s not too late, either.

So for anybody who says “I wanna be a filmmaker,” strike that thought out and get this book. It’s a great primer for actually going and doing it. Yes, you do need some initial funds, but you can scrape and save and write the damn story in the meantime.

I was looking for motivation to write, to stop being despondent over my seeming lack of ideas in the fiction department, to stop letting myself get discouraged. Write, write, write, and save, save, save to make a movie. Get those little bad ideas out of your system and learn your craft.

Hell, the “Ten Minute Film School” before the original El Mariachi script in the back is worth it alone. Amazing.

Not to say you can’t learn anything from film school, but don’t go to film school expecting to come out knowing everything. Spend some time in the muck of the trenches and get some “unwatchable” stuff out of the way first. That’s what he recommends, and it makes sense. My analogy: it’s like learning all about musical theory for years, and then going to rehearse before you’ve ever touched an instrument.

Enjoy, dear aspiring artists, enjoy the hell out of Rebel Without A Crew. I’m keeping this one on my shelf until it disintegrates, and then I’ll get a new one. When I think things can’t possibly get done, I’ll have this one at the tips of my fingers to remind me.