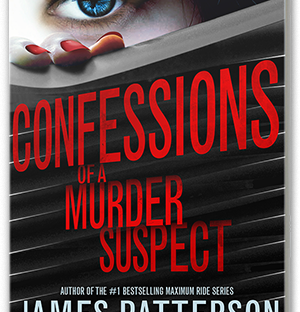 I wasn’t sure if this was a book I’d keep reading or put down. When I had nothing better to do, I started reading it again, and just kept going til I finished it. It’s been probably 16 hours since I started it, and I was impressed.

Confessions of a Murder Suspect is from the point of view of teenager Tandoori “Tandy” Angel, the daughter with three brothers of famous parents who were found dead in their bedroom, the kids and a secretary the only ones in the home. The kids are all exceptional in some way, through abilities or intelligence, and as events unfold, they get to working together to figure out who killed their father and mother.

This is a very odd family, with rewards and punishments and secrets that are just crazier and crazier as time goes on. As more secrets are revealed, their relationship and understanding of who their parents were changes.

What makes it a page-turner is Tandy understanding that something is really wrong, and that she’s determined to figure out who killed their parents, even if it turns out she was involved somehow. You get a lot of conflicted emotions from her, a love-hate relationship with her parents and how she sees her siblings over time as the pressure and stress of the situation gets to them.

And how Tandy, not used to her emotions, figures them out, along with some buried secrets revolving around her and a dead sister.

I’m not used to the writing style as such. I typically stay away from narration that feels too familiar or flighty in mind. Thankfully, those moments are largely restricted to the “confessions” mini-chapters that crop up to clarify Tandy’s train of thought. That made the book more readable, and let me keep going.

And I’m glad I did–there’s so much in this book, so many bizarre moments, and even a few loose ends to chew on when the covers are closed and the book is shelved.

I’m still having fun chewing on it.

Worth a read if you like a good, ever-building mystery that takes its time to unfold.